Portrait of Mick Fleetwood and John McVie. Their surnames formed the name of the band Fleetwood Mac.

Hugh Syme is notably responsible for all of Rush’s album cover art since 1975’s Caress of Steel. He is also a musician and has appeared in some Rush songs as a keyboard player and he has contributed as a musician with Ian Thomas Band and Tiles.

The album cover for Caress of Steel was intended to be printed in a silver colour to give it a “steel” appearance. A printing error resulted in giving the album cover a copper colour. The error was not corrected on subsequent printings of the album. 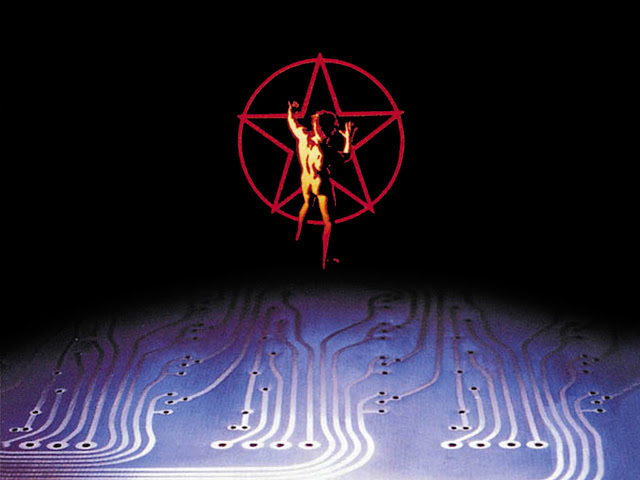 The Starman emblem (also known as the ‘Man in the Star’ logo) was adopted by Rush fans as a logo since its first appearance on the back cover of 2112. Peart described the Starman in an interview with Creem magazine:

“All (the naked man) means is the abstract man against the masses. The red star symbolizes any collectivist mentality.”

In 1983 Hugh Syme told Jeffrey Morgan that he never imagined the band would use the Starman as their main logo.

The title of this album alludes to William Shakespeare‘s play As You Like It. 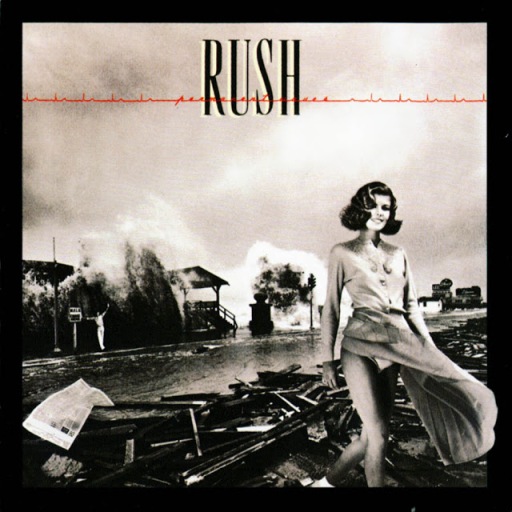 The cover art sparked some controversy because of the appearance of the “Dewey Defeats Truman” headline on the newspaper. Because of pressure from the Chicago Tribune, cover designer Hugh Syme changed the text to “Dewei Defeats Truman”. The billboards in the distance were changed from Coca-Cola (who objected to the use of their logo) to include each band member’s name in similar type style.

The background scene comes from a photo, taken by Flip Schulke, of the Galveston Seawall in Texas during Hurricane Carla on September 11, 1961. The woman pictured in the foreground is model Paula Turnbull. The waving man in the background is Hugh Syme. 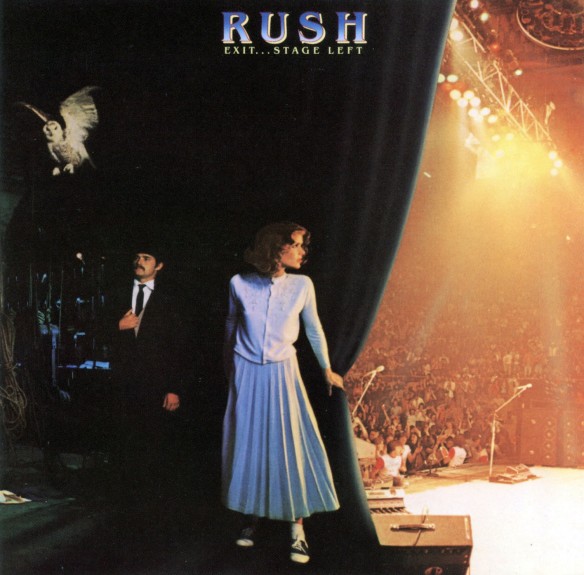 The title is from the signature catchphrase “Exit, stage left!” of the Hanna-Barbera pink mountain lion cartoon character Snagglepuss (coincidentally, Time Warner, former owners of Rush’s later label Atlantic Records, owns the H-B properties today). The term “stage left” is a stage direction used in blocking to identify the left side of a theater from the point of view of the performer, as opposed to the point of view of the audience.

An item from each of Rush’s previous eight studio album covers can be seen on the front and back cover of this live album, though each has been modified in some way. The owl from Fly by Night flies above Apollo, the man in the suit from Hemispheres, who stands next to the woman from Permanent Waves. The puppet king from A Farewell to Kings sits atop a box stenciled with the “Rush” logo from Rush. Next to him is a painting of the Caress of Steel album cover, held by one of the movers from Moving Pictures, with another mover standing behind. Next to this is Dionysus, the nude man from Hemispheres. Behind this scene, the starman from 2112 hangs in the background, next to an “EXIT” sign. This entire foreground scene, shot in Toronto’s then-abandoned Winter Garden Theatre, is on the left side of the stage (from the point of view of the artist), thus “Exit…Stage Left”.

“…The essence of these songs is: if there’s a chance, you might as well take it. So what if some parts of life are a crap shoot? Get out there and shoot the crap. A random universe doesn’t have to be futile; we can change the odds, load the dice, and roll again…. For anyone who hasn’t seen Groucho Marx’s game show You Bet Your Life, I mean that no one but Groucho knows the secret word, and one guess is as good as another… Anything can happen. That is called fate. 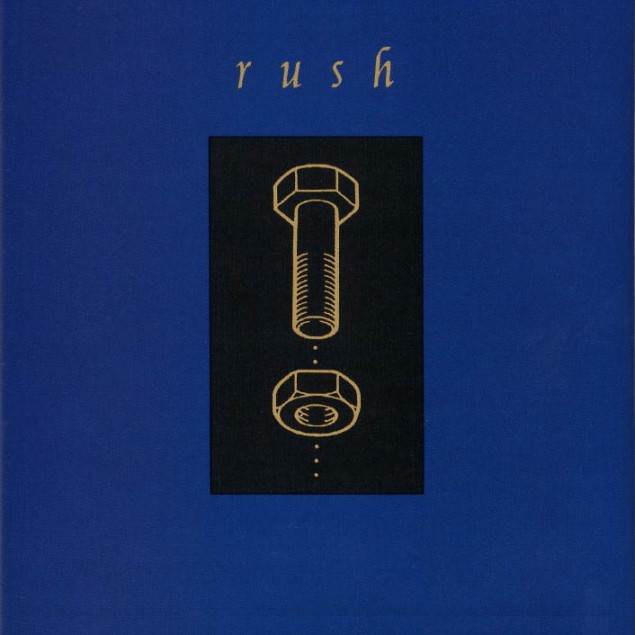 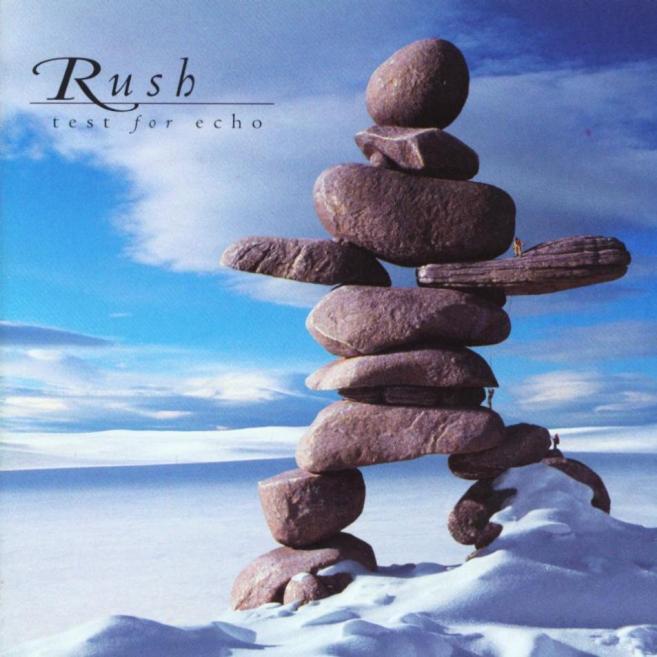 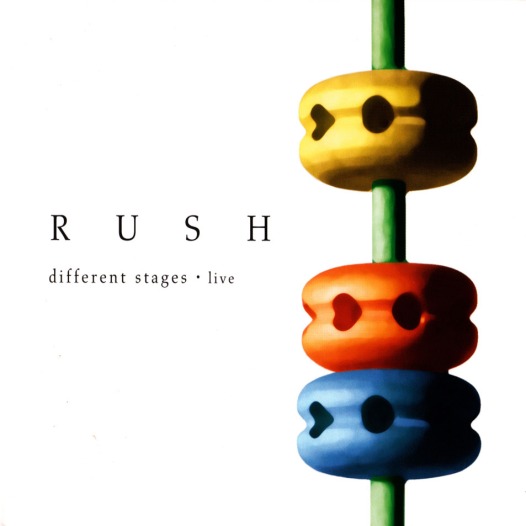 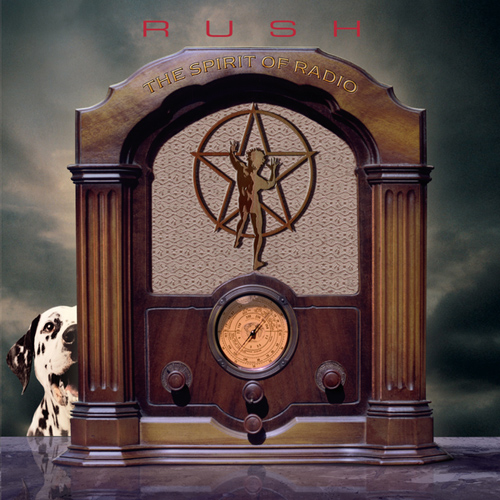 The album features eight covers of songs that were influential for the band members during the 1960s. 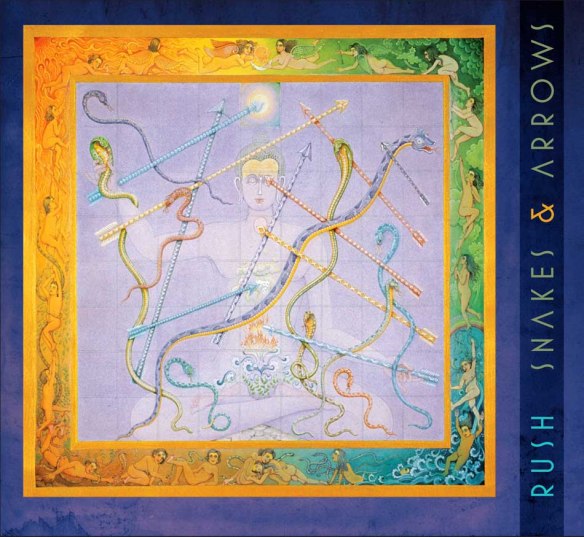 According to drummer and lyricist Neil Peart, inspiration for the title of the album was conceived after considerable research from several sources; the 2000-year-old Buddhist game called  Leela, the Game of Self Knowledge, the related children’s game Snakes and Ladders (also known as Chutes and Ladders), and Hamlet‘s quote “slings and arrows.” This information helped convince bassist Geddy Lee and guitarist Alex Lifeson to adopt the original painting of the age old game board as the cover for the new album. 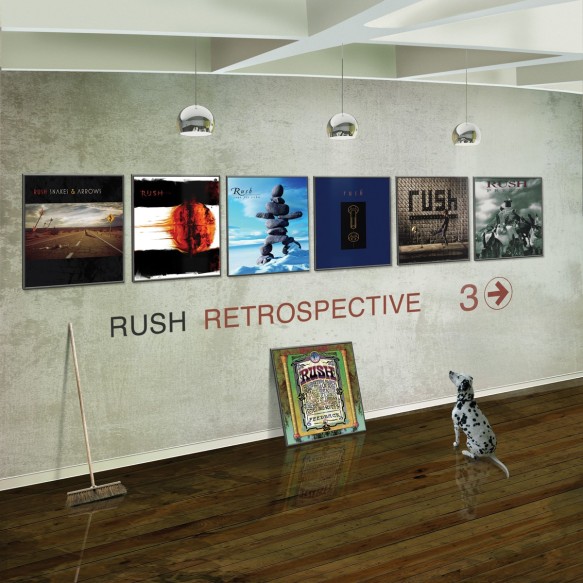 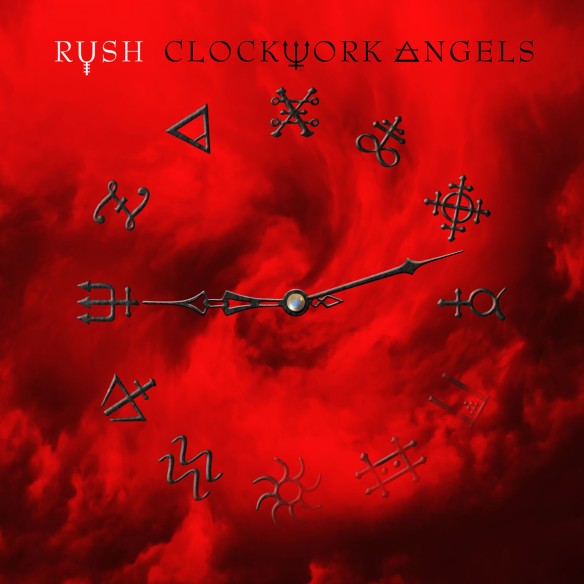 The album’s cover depicts a clock marked with alchemical symbols instead of numbers. It displays the time as 9:12 (21:12 in 24-hour time),  in reference to the band’s 2112 album and its title suite. Other symbols are incorporated into the band name and album title.