In molecular biology, the term double helix refers to the structure formed by double-stranded molecules of nucleic acids such as DNA. The double helical structure of a nucleic acid complex arises as a consequence of its secondary structure, and is a fundamental component in determining its tertiary structure. The term entered popular culture with the publication in 1968 of The Double Helix: A Personal Account of the Discovery of the Structure of DNA, by James Watson.

In 1953, James Watson and Francis Crick suggested what is now accepted as the first correct double-helix model of DNA structure in the journal Nature. Their double-helix, molecular model of DNA was then based on a single X-ray diffraction image (labeled as “Photo 51”) taken by Rosalind Franklin and Raymond Gosling in May 1952, as well as the information that the DNA bases are paired—also obtained through private communications from Erwin Chargaff in the previous years. Chargaff’s rules played a very important role in establishing double-helix configurations for B-DNA as well as A-DNA. 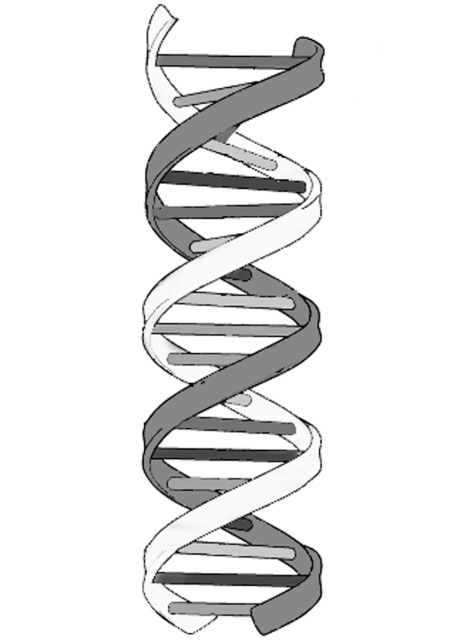 A segment of the very long DNA molecule—the double helix. Physically, DNA resembles a spiral staircase. Each rung of the ladder is composed of two chemicals, called nucleotides or base pairs, that are chemically bonded to each other. DNA has four nucleotides: adenine, thymine, guanine, and cytosine, usually abbreviated by the first letter of their names- A, T, G, and C.

A caduceus—the staff carried by Hermes, “the messenger of the gods.” Is its double-helical structure an ancient Greek premonition of the most vital ‘message of the gods,’ or simply a coincidence. It is said the wand would wake the sleeping and send the awake to sleep. If applied to the dying, their death was gentle; if applied to the dead, they returned to life.

Kafka’s Soup is a literary pastiche in the form of a cookbook. It contains 14 recipes each written in the style of a famous author from history. As of 2007 it had been translated into 18 languages and published in 27 countries. Excerpts from the book have appeared in the Sydney Morning Herald and the New York Times. Theatrical performances of the recipes have taken place in France and Canada. Kafka’s Soup is Mark Crick‘s first book. He has subsequently written two other books with similar themes; Sartre’s Sink and Machiavelli’s Lawn which are literary pastiches in the form of a DIY handbook and a gardening book respectively. Anybody who prefers their recipes to be a simple list of foolproof instructions should stay away.

Among the recipes that did not make the original edition of the book was “plum pudding à la Charles Dickens” which was written but rejected by Mark Crick for being “too long-winded”. It was, however, included in a subsequent paperback edition of the book along with two recipes, Rösti à la Thomas Mann and moules marinieres à la Italo Calvino, originally created for the German and Italian translations respectively.

Kafka’s Soup has become a cult hit. Andy Miller of The Telegraph called the recipes “note-perfect parodies of literary greats”. Emily Stokes of The Observer called it an “illustrated masterpiece of pastiche” citing the lamb with dill sauce as “particularly good”. C J Schüler wrote that Virginia Woolf’s clafoutis grandmere is the “pièce de resistance” and called the collection “irresistibly moreish”. He later called the book “a little gem of literary impersonation”. Schüler believes that “part of the book’s appeal lies in the fact that the recipes…actually work.” 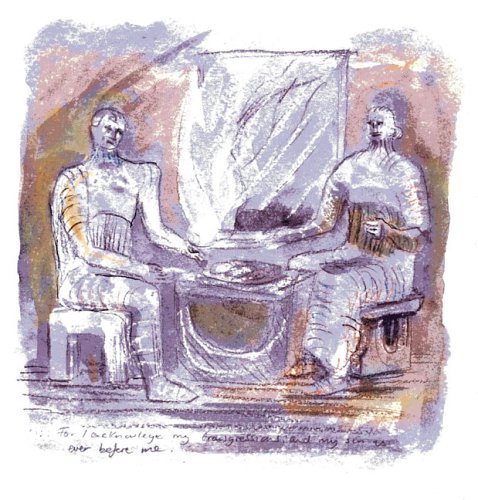 Kafka’s Soup is illustrated with paintings by the author in the style of a number of famous artists including Pablo Picasso, Henri Matisse, William Hogarth, Giorgio De Chirico, Henry Moore, Egon Schiele and Andy Warhol.

The idea for Kafka’s Soup arose during a conversation between Crick and a publisher. Crick noted his dislike for cookbooks saying that he enjoyed looking at the pictures but found the accompanying text dull. When asked what would it take for him to read beyond the ingredients list he replied “if [the text] was written by the world’s greatest authors.” The publisher liked the idea and, in Crick’s words, “she said that if I wrote it she’d publish it.”

Most of the recipes in the book are Crick’s own, although some, such as the chocolate cake, came from his friends. Crick notes the implausibility of some of his authors cooking their stated dishes (for example he states that John Steinbeck “would never have eaten [mushroom risotto]” and “I certainly accept any challenge that Kafka would not have eaten miso soup”). He says that he selected the recipes based on the ability of each dish to allow him to use the language he wished to use. Chocolate cake was selected for Irvine Welsh because “people become terribly selfish when there’s chocolate cake around, just as they do with drugs. It’s the closest many get to taking heroin.”

Crick says that he found Virginia Woolf the most difficult of the authors to write while Raymond Chandler was the easiest.