“I chose Bazaar because I liked it much better than Vogue– graphically, it was more sophisticated. I called cold and asked to talk to an editor. It turned out there was an opening in the art department, and Marvin Israel, the director, took a big chance on me. He wanted somebody that didn’t have to unlearn graphic design clichés. Bea Feitler, his protégé and star pupil from Parsons, had been hired a month earlier. My first few months were a disaster.”

“In 1962 Marvin was fired, and Bea and I became the art directors. We were pioneers in a way– not only were we young women but we were working as graphic design partners. Then in 1971, a new editor came in to make Bazaar more newsy and we were both fired– almost simultaneously.” 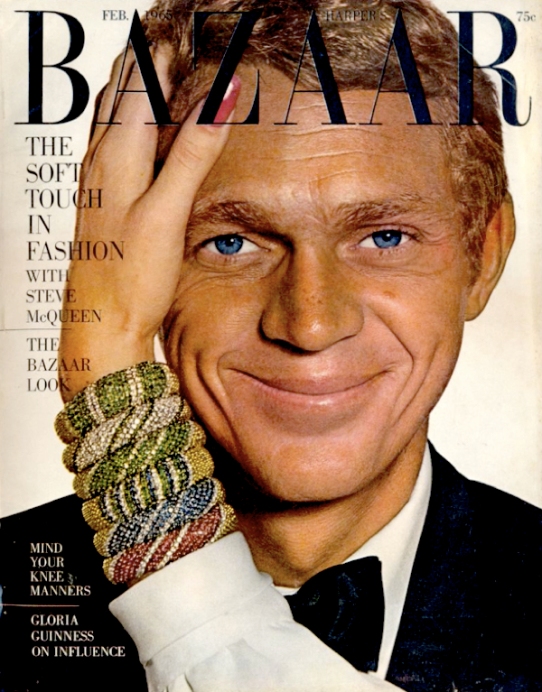 When Ruth Ansel put Steve McQueen, photographed by Richard Avedon (also the guest editor), on the cover of Harper’s Bazaar in 1965, it was the first time a male appeared on the cover of a women’s fashion magazine.

At first look there are obvious reasons to love this February, 1965 cover of Harper’s Bazaar magazine: Steve McQueen of course, and the amazing photography of the legendary Richard Avedon. But there is another visionary manifested here, not often spoken of, especially back when this was on the newsstand: Ruth Ansel, a female pioneer in the world of graphic design.

An interesting footnote: 22 year old Ali MacGraw (pre-McQueen days) worked under Diana Vreeland at Harper’s Bazaar until she was finally convinced by a bevy of photographers to get out from behind the camera and strike a pose. And the rest is history, as they say…

“Point to an iconic magazine cover of the last 40 years, and chances are it was designed by Ruth Ansel. Since 1961, when she talked her way into the art department at Harper’s Bazaar, Ansel has defined the look of some of America’s visually influential publications. In the 1960s, her work for Bazaar captured a transitional moment in fashion and society. In the 1970s, she became the first female art director of The New York Times Magazine and in the 1980s she created the look of Vanity Fair.” 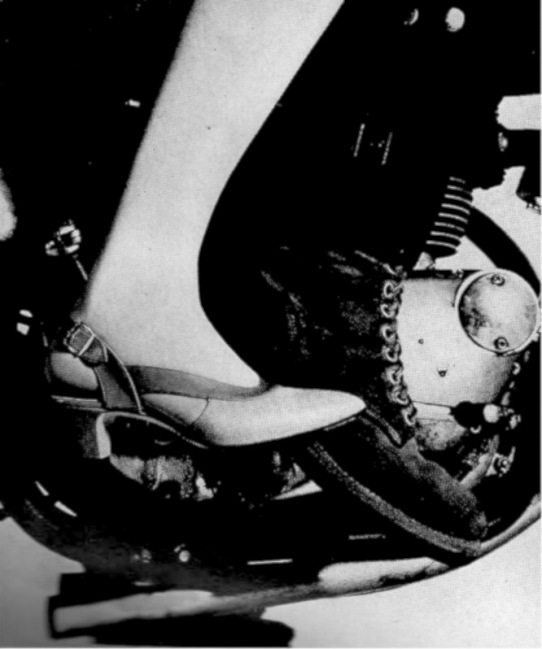 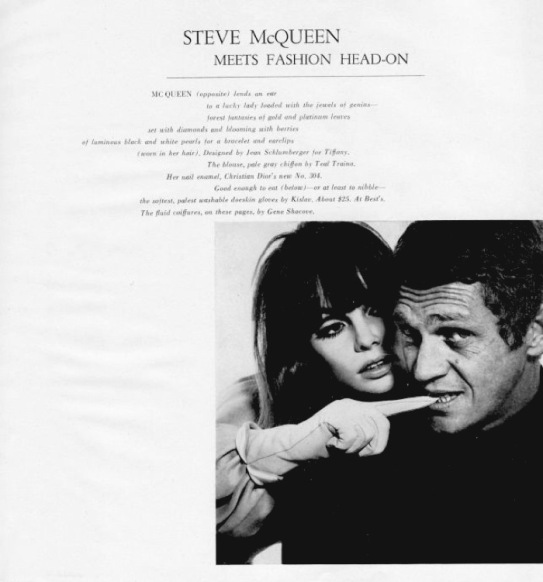 “…Not only did Lady Gaga reproduce works by the artist, but she also drew inspiration from her concepts. Orlan’s entire universe of hybridizations was copied in the Born This Way album, such as giving birth to oneself, which is seen in Orlan’s photography series Orlan accouche d’elle-m’aime (ou d’elle-m’aime)”, 1964-66. The inspiration went too far.”

(Orlan Gives Birth to Herself) or (to Her Beloved Self)

Orlan (born Mireille Suzanne Francette Porte) is a French artist, born May 30, 1947 in Saint-Étienne, Loire. She adopted the name Orlan in 1971, which she always writes in capital letters : “ORLAN”.

ORLAN, well-known for using her body as a tool for her art, sued Gaga for plagiarism, saying the singer has counterfeited three of her works through her Born This Way era, and especially in her Born This Way music video.

The works that are being talked about here are Bumpload, a sculpture representing ORLAN as a sort of bionic hybrid, that is, according to the artist, what inspired the Born This Way album cover.

The second work is the 1996 installation Woman with head, that has apparently been “copied” by Gaga through one of the BTW video sequences.

Finally, ORLAN pretends Gaga simply stole her life, her universe, and especially the face implants that the artist has infamously got through a surgery-performance in the 90s. 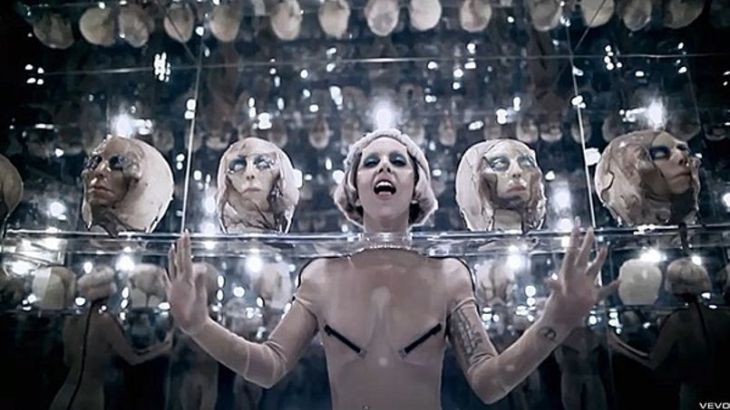 “The vision is of me in an endless journey. I am a vehicle. I am a vehicle for all of the ideas. And I’m not riding away or towards anything, I’m just in endless state of creativity.”

On April 17. 2011, the cover art for the album was released, and featured Gaga fused into a motorcycle. Gaga’s name does not appear on the standard edition album cover, the only text is the chrome writing across the top reading the album’s name in Akzidenz-Grotesk. The expanded edition feature a closeup of Gaga’s head with her name and the album name written on the top right corner in Impact. The picture used for the cover was taken on December 14, 2010 during the same photoshoot as the Born This Way single cover.

In Gagavision 42 during a Haus meeting, Gaga is shown explaning that she hates the word “deluxe” and doesn’t want it to be on the cover.

“When we do right, nobody remembers. When we do wrong, nobody forgets”

The Hells Angels’ official website attributes the official “death’s head” insignia design to Frank Sadilek, past president of the San Francisco Chapter. The colors and shape of the early-style jacket emblem (prior to 1953) were copied from the insignias of the 85th Fighter Squadron and the 552nd Medium Bomber Squadron

An image of the “HAMC Death Head design” mark registered for various goods, including jewelry, by the Hells Angels Motorcycle Club 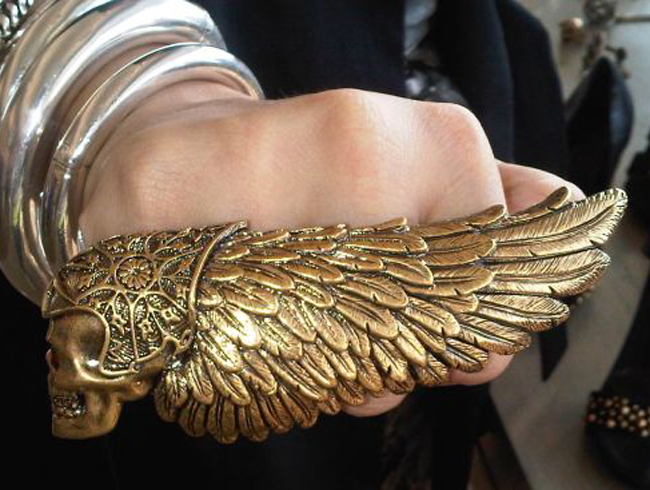 In October 2010, the Hells Angels filed a lawsuit against  Alexander McQueen for “misusing its trademark winged death heads symbol”, after the fashion house featured motifs similar to its famous winged death head. Lawyers for the motorcycle gang cited four products from the late designer’s final collection, created shortly before his suicide in February 2011.

They named the  ‘Hells Angels’ jacquard box dress, and a knuckle-duster ring in the complaint, as well as a scarf and a handbag.

The complaint argued that the symbol has been used by the Hells Angels since at least 1948, and that it is protected by the U.S. Patent and Trademark Office. The lawyer representing Hells Angels claimed “This isn’t just about money, it’s about membership. If you’ve got one of these rings on, a member might get really upset that you’re an impostor.”

Twice in the weeks leading up to his death, Mr. McQueen messaged on Twitter, “Hells angels [sic] and prolific demons.” What seemed a non sequitur then appeared to be a reference to the collection he was working on, imprinted with the angels of Sandro Botticelli and the demons of Hieronymus Bosch.

In March 2007, the Hells Angels filed suit against the Walt Disney Motion Pictures Group alleging that the film entitled Wild Hogs (Walt Becker, 2007) used both the name and distinctive logo of the Hells Angels Motorcycle Corporation without permission.The suit was eventually voluntarily dismissed, after it received assurances from Disney that its references would not appear in the film.

“But with the throttle screwed on there is only the barest margin and no room for mistakes. It has to be done right . . and that’s when the strange music starts, when you stretch your luck so far that the fear becomes exhilaration and vibrates along your arms. You can barely see a hundred; the tears blow back so fast that they vaporize before they get to your ears… ” 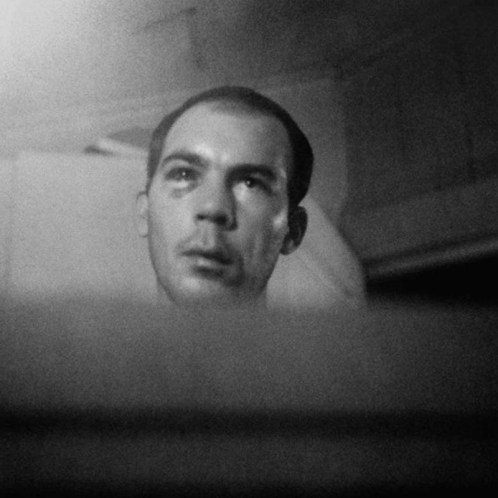 Hell’s Angels began as the article The Motorcycle Gangs: Losers and Outsiders, written by Thompson for the May 17, 1965 issue of The Nation. In March 1965, The Nation editor Carey McWilliams wrote to Thompson and offered to pay the journalist for an article on the subject of motorcycle gangs, and the Hells Angels in particular. Thompson took the job and the article, published about a month later, prompted book offers from several publishers interested in the topic.

Thompson spent the next year preparing for the new book in close quarters with the Hells Angels, in particular the San Francisco and Oakland chapters of the club and their president Ralph “Sonny” Barger. Thompson was upfront with the Angels about his role as a journalist, a dangerous move given their marked distrust of reporters from what the club considered to be bad press. Thompson was introduced to the gang by Birney Jarvis, a former club member and then police-beat reporter for the San Francisco Chronicle. This introduction, coming from an Angel and reporter, allowed Thompson to get close to the gang in a way others had not been able.

Thompson remained close with the Angels for a year, but ultimately the relationship waned. It ended for good after several members of the gang gave him a savage beating or “stomping” over a remark made by Thompson to an Angel named Junkie George, who was beating his wife. 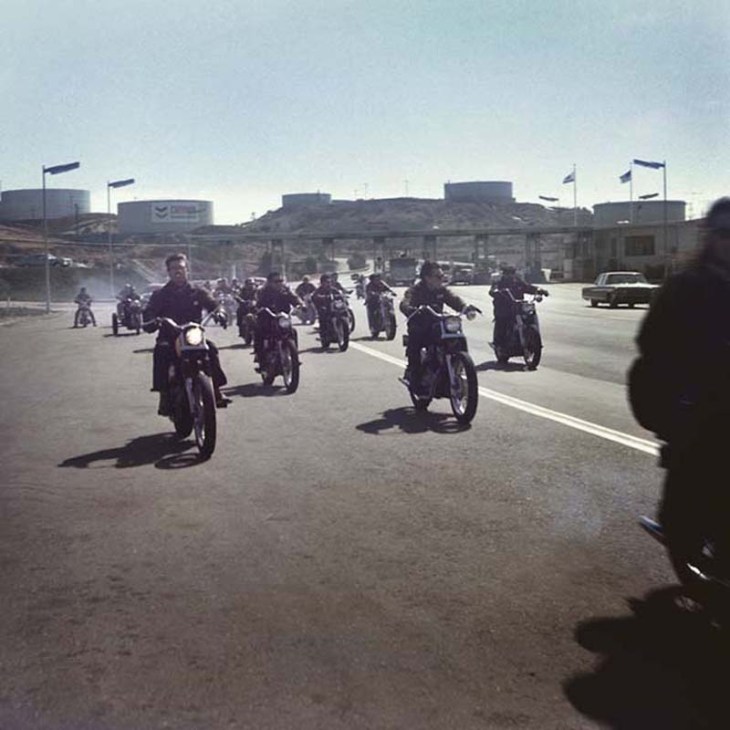 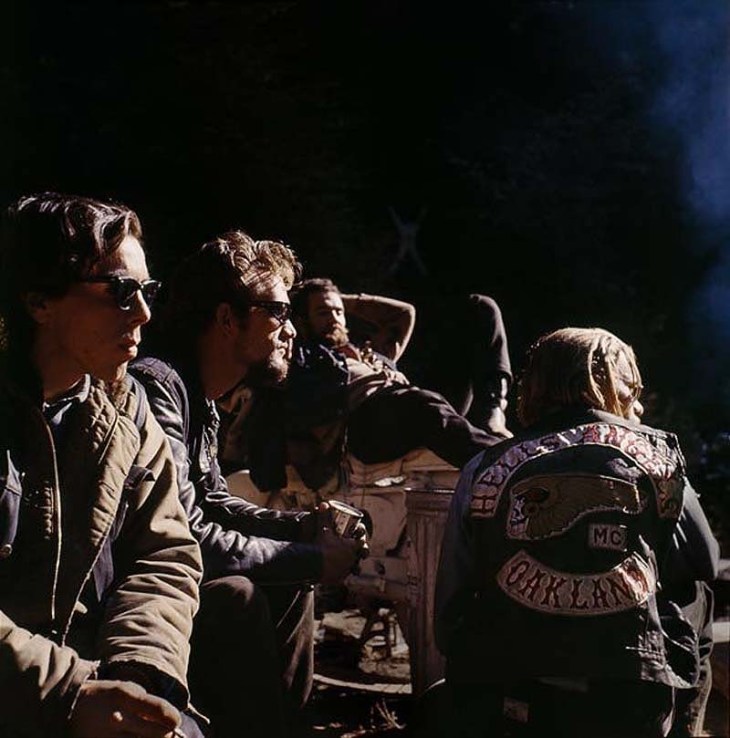 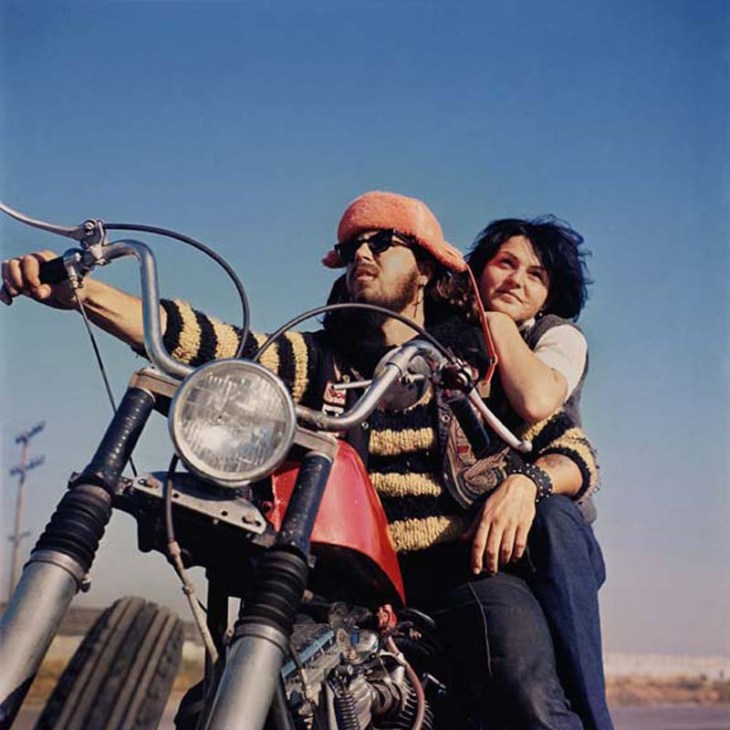 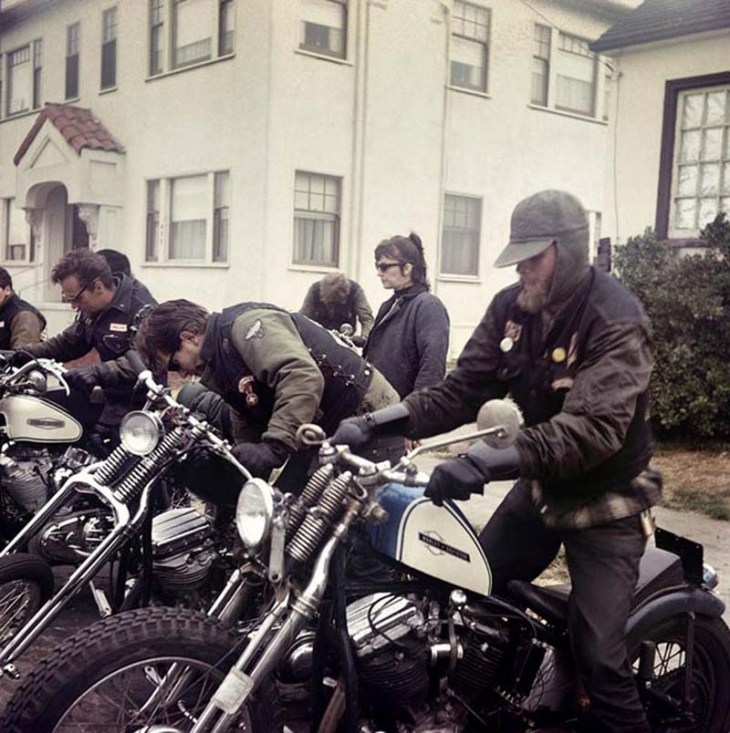 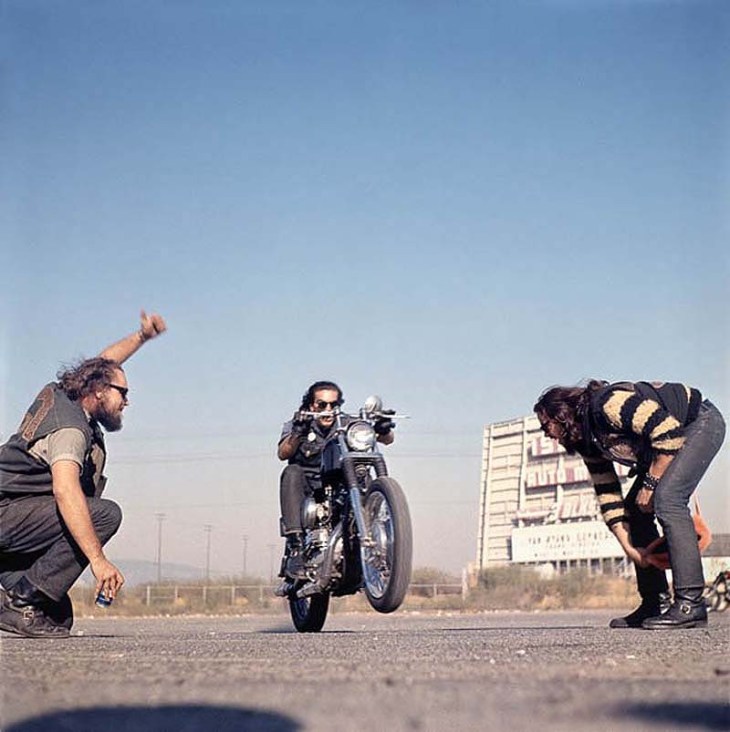 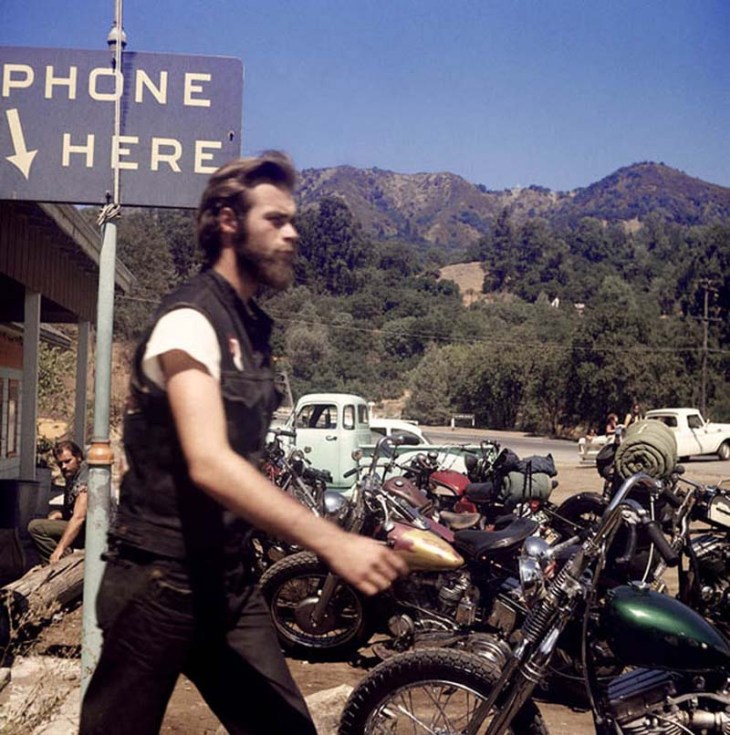 The only sounds are the wind and the dull roar floating back from the mufflers. You watch the white line and try to lean with it . . . howling through a turn to the right, then to the left and down the long hill to Pacifica . . . letting off now, watching for cops, but only until the next dark stretch and another few seconds on the edge . . . The Edge . . . ”

Hell’s Angels: The Strange and Terrible Saga of the Outlaw Motorcycle Gangs 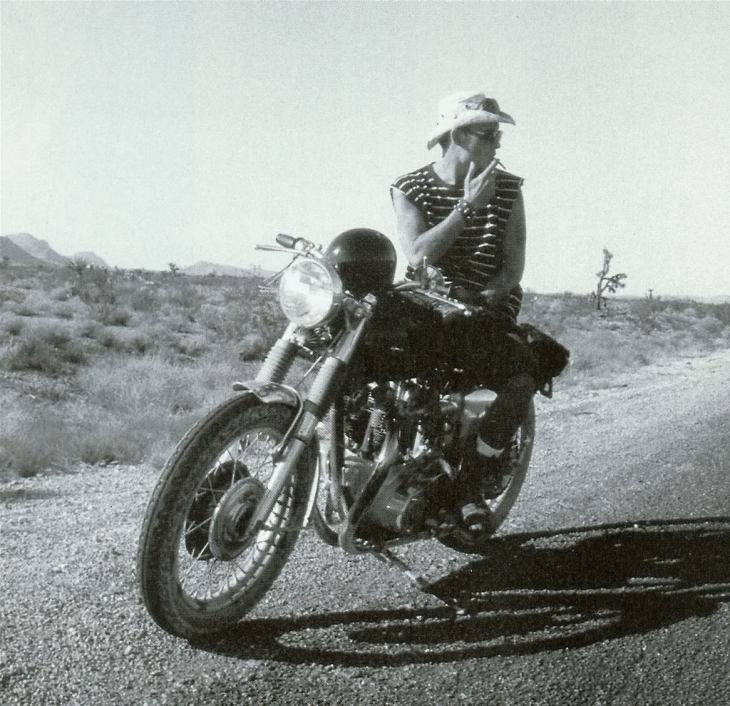 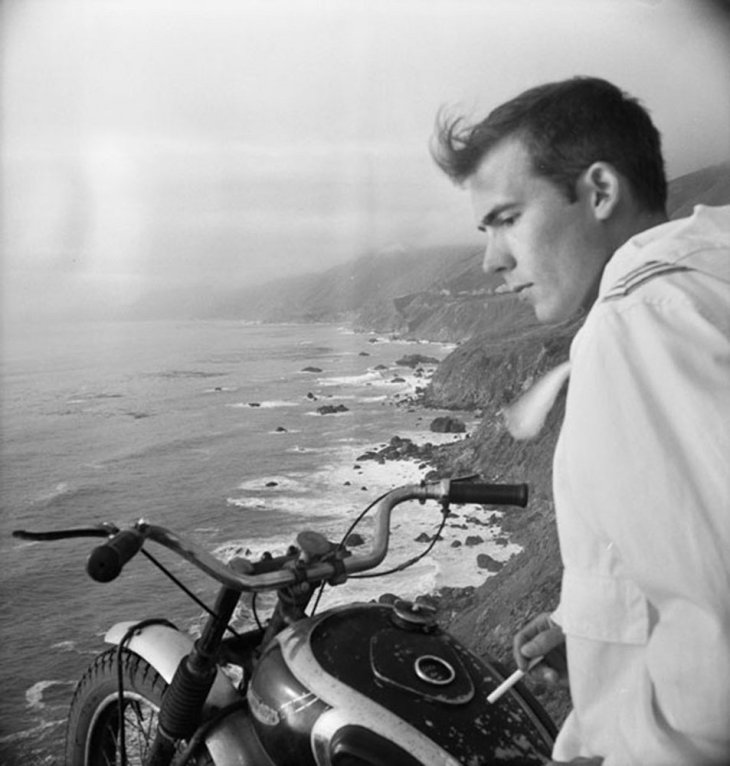 “In my own country I am in a far-off land
I am strong but have no force or power
I win all yet remain a loser
At break of day I say goodnight
When I lie down I have a great fear
Of falling.”

Epigraph of Hell’s Angels: The Strange and Terrible Saga of the Outlaw Motorcycle Gangs, by Hunter S. Thompson (1966)

When Irving Penn photographed a bunch of Hells Angels for Look Magazine in 1968 all the classic Penn elements were there – there was the stark backdrop; the steely monochrome and the naturalism of the sitter’s attitude and expression. Whether or not Penn’s subjects were the rich and the famous or a bunch of hairy bikers he always managed to capture something lasting and resonant about the individuals involved.

The Hells Angels were originally started by American war immigrants, the Bishop family in Fontana, California followed by an amalgamation of former members from different motorcycle clubs. The name “Hell’s Angels” was inspired by the typical naming of American squadrons, or other fighting groups, with a fierce, death-defying title in both World War I and World War II, e.g., the Flying Tigers (American Volunteer Group) in Burma and China fielded three squadrons of P-40s and the third Squadron was called “Hell’s Angels”. In 1930, the Howard Hughes film Hell’s Angels displayed extraordinary and dangerous feats of aviation, and it is believed that the World War II groups who used that name based it on the film.

The name of the Hells Angels motorcycle club has no apostrophe, but in the title and in the text of Thompson’s book a possessive apostrophe was added to the name, rendering it as Hell’s Angels.