(“Man is…a thinking erratum, that’s what he is. Every season of life is an edition that corrects the one before and which will also be corrected itself until the definitive edition, which the publisher gives to the worms gratis.”)

(“Word drags word, one idea brings another, and so on, a book, a government, or a revolution is made. Some people say, in fact, that’s the way nature put together their species”)

The Sea Inside, digital artwork by Christian Schloe

‘We can complain because rose bushes have thorns, or rejoice because thorn bushes have roses.’
Abraham Lincoln

The rose personally chosen by the late Alexander McQueen for his friend Isabella Blow before he passed away was launched at Hampton Court Palace Flower show. The flower, named Alexander’s Issie, was presented to Blow’s sister Julia Delves Broughton

Alexei Brodovitch‘s signature use of white space, his innovation of Bazaar‘s iconic Didot logo, and the cinematic quality that his obsessive cropping brought to layouts (not even the work of Man Ray and Henri Cartier-Bresson was safe from his busy scissors) compelled Truman Capote to write, “What Dom Pérignon was to champagne … so [Brodovitch] has been to … photographic design and editorial layout.” 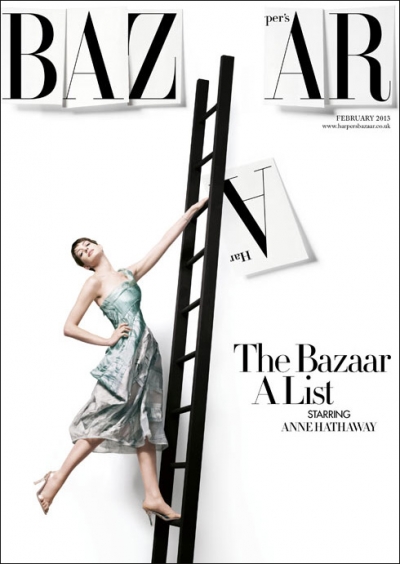 Franca Sozzani told: “We put Fan Bingbing on the cover of L’Uomo Vogue and we dedicated an entire issue to China. In the past, we’ve done many shoots with Asian girls, with photographers like Peter Lindbergh or Steven Meisel or Craig McDean.” She called this cover by Meisel “extravagant, eccentric, and elegant … showing a new chic mood in fashion and how the Asian girls have a classy and special beauty.” 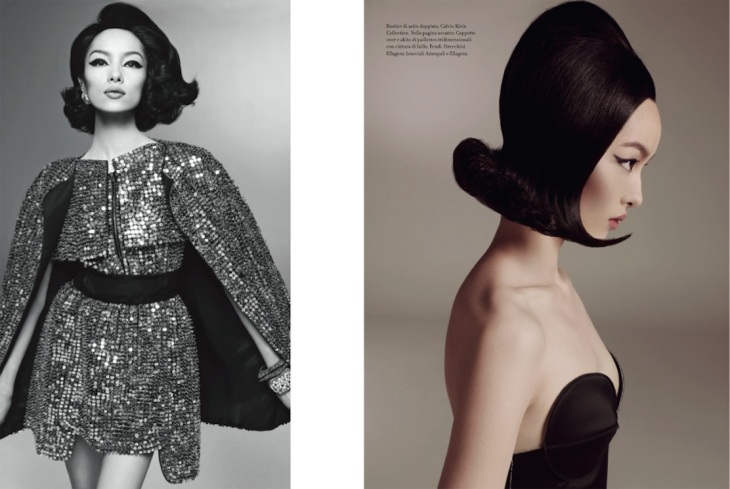 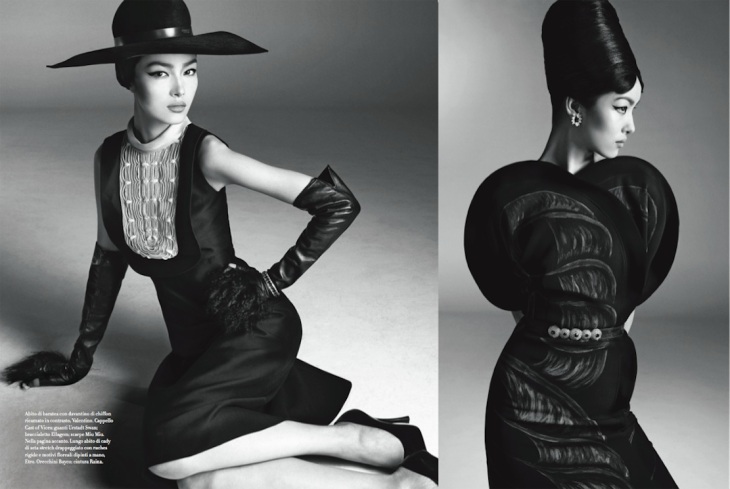 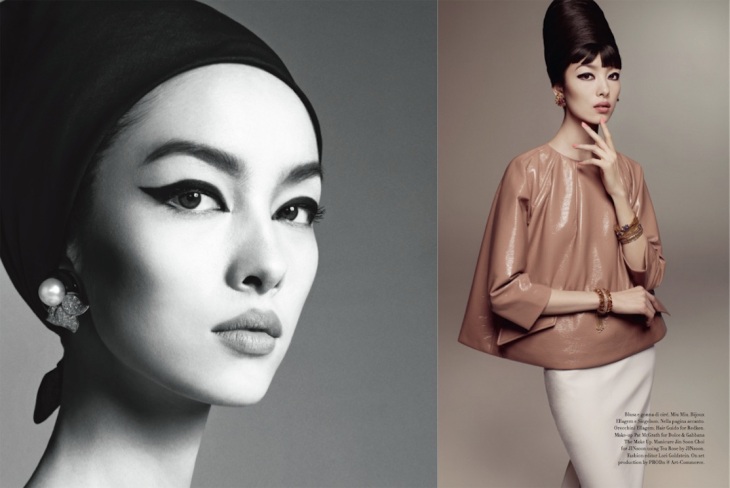 The earliest surviving examples of Pre-Columbian tie-dye in Peru date from 500 to 810 AD. Their designs include small circles and lines, with bright colors including red, yellow, blue, and green.

Tie-dye is a modern term coined in the mid-1960s in the United States for a set of ancient resist-dyeing techniques, and for the products of these processes. The process of tie-dye typically consists of folding, twisting, pleating, or crumpling fabric or a garment and binding with string or rubber bands, followed by application of dye(s). The manipulations of the fabric prior to application of dye are called resists, as they partially or completely prevent the applied dye from coloring the fabric. More sophisticated tie-dyes involve additional steps, including an initial application of dye prior to the resist, multiple sequential dye and resist steps, and the use of other types of resists (stitching, stencils) and discharge.

Tie-dyeing was known in the US by 1909, when Professor Charles E. Pellow of Columbia University acquired some samples of tie-dyed muslin and subsequently gave a lecture and live demonstration of the technique.

Although shibori and batik techniques were used occasionally in Western fashion before the 1960s, modern psychedelic tie-dying did not become a fad until the late 1960s following the example set by rock stars such as Janis Joplin and John Sebastian (who did his own dyeing).

Tie-dying, particularly after the introduction of affordable Rit dyes, became popular as a cheap and accessible way to customize inexpensive T-shirts, singlets, dresses, jeans, army surplus clothing, and other garments into psychedelic creations. Some of the leading names in tie-dye at this time were Water Baby Dye Works (run by Ann Thomas and Maureen Mubeem), Bert Bliss, and Up Tied, the latter winning a Coty Award for “major creativity in fabrics” in 1970. Up Tied created tie-dyed velvets and silk chiffons which were used for exclusive one-of-a-kind garments by Halston, Donald Brooks, and Gayle Kirkpatrick, whilst another tie-dyer, Smooth Tooth Inc. dyed garments for Dior and Jonathan Logan.

“I was born to be a model. I don’t mean that physically because, as Dick (Richard Avedon) once told me, “You’ll never make a lot of money in this industry because you’re too special”. But like models now, from an early age I was accustomed to moving a lot. I was born in Shanghai in 1929 and lived there till I was 16. We were forced out (during the Japanese occupation) and then I lived between Argentina and Peru before I came to Europe.

I fell in love with a bullfighter, Luis Miguel Dominguín, which was a very big scandal. My family didn’t speak to me for 15 years. But I don’t regret it. He was 27 and gorgeous, like Mick Jagger. In Paris I sang in a nightclub, and I met Hubert de Givenchy and started to work in his atelier. There were two types of models in the early ‘50s: photographic models and runway models, which is what I was. It was different then. I would work with a designer for three months, as they would create dresses specifically for me. It was couture. I made $100 a month, and I was the highest-paid model in Europe at the time. I had a very distinctive walk.

In September 1958, I arrived in New York. Diana Vreeland cast me in a group of fashion show, which I opened wearing a fabulous Balenciaga dress. Dick saw me, and the next thing I knew I was in his studio. I worked exclusively with Dick and Bazaar for the next three years. I stopped in 1962 because, frankly, I couldn’t give a damn. A model had so much to worry about: we had to get our own hair done and do our own makeup. I was happy to become a fashion editor at Bazaar (from 1962 to 1972).

I eat all the time. My favorite food is rice, and I eat it at least once a day. I’m always active. Perhaps that’s what keeps me in shape- I’m always moving. In 1972 I was on the cover of Bazaar, and I said the same thing: I don’t exercise, I don’t diet, and I dye my own hair. People thought I was lying. But it was true then and it’s true now.” 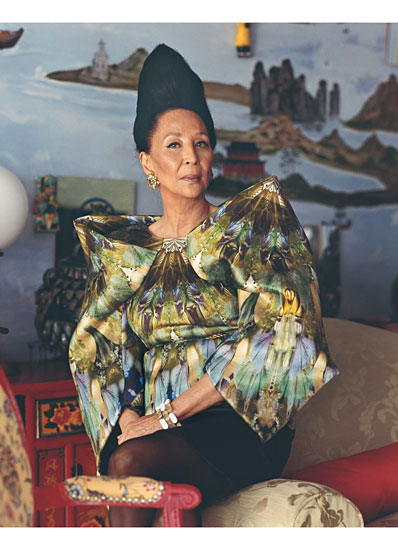 To smoke is a brilliant, sensual pleasure…
Smoking I wait for the man I love,
behind the glass of happy large windows.
And while I smoke my life I don’t consume
because floating the smoke I usually fall to sleep.

Laying in my sofa, smoking and making love,
seeing my loved one happy and enamored,
feeling his lips to kiss with wise kisses.
And feeling the affair with more desire,
when I feel his eyes thirsty with passion.

For when my darling is in
my smoking is an Eden.
Give me the smoke from your mouth
Give me that in me,
provokes passion
Run that I want
to go crazy with pleasure,
feeling that heat
of the intoxicating smoke
that ends up lighting up
the ardent flame of the love.

The hour of restlessness with him is not cruel
his spirals are celestial dreams,
and they form clouds that towards the glory raise
and surrounded in it, his spark is a star,
that shines clear and beautiful with limpid splendor.

Sara Montiel sang with her deep voice the famous version of Fumando espero (Smoking I Wait) in  El Último Cuplé (The Last Torch Song), a 1957 Spanish movie directed by Juan de Orduña. Set in the late 19th century, the story concerns a famous music-hall singer who achieves fame with the help of a handsome impresario (Armando Calvo). At the height of her success, our heroine falls for a much-younger bullfighter (Enrique Vera).