In The Norman Rockwell Album of 1961, the artist recalled his encounters with Kennedy.

It was a cold, misty morning in Hyannis Port. Mr. Kennedy leaned out of an upstairs window in his pajamas and said to go right on into the house, he would be down in a minute.  While Mr. Kennedy ate his breakfast, I selected a room in which to take photographs.  As I posed him, I remarked that I thought a rather dignified, serious pose would be best; his youthful appearance should not be emphasized.  He agreed.  Afterward we walked onto to the breakwater near the house to see his sailboat.  As we were returning to the house, Mr. Kennedy suggested that we try the pose again.  He felt that he had been a little stiff the first time.  We did, and his expression was just what I had wanted—serious, with a certain dignity, but relaxed and pleasant, not hard. 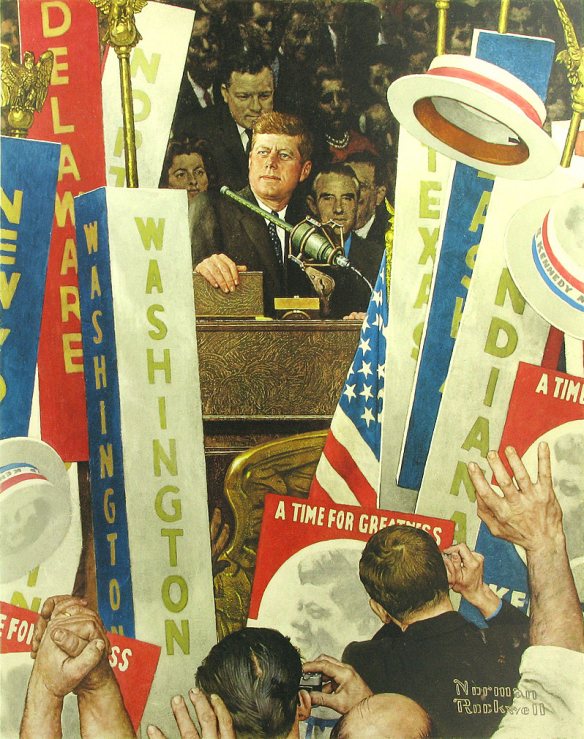 Rockwell repeated the simple and powerful style used in Freedom of Worship to lend impact to this painting. Knowing his strength lay in communicating ideas and feelings through facial expressions, Rockwell chose to portray faces rather than situations to commemorate the fifth anniversary of the Corps. During his 1960 presidential campaign, John F. Kennedy proposed the idea of a volunteer organization of trained people who would be sent to developing nations in Africa and Asia to assist villagers in educational and agricultural projects. In 1961, the program which Kennedy hoped would promote understanding between nations was officially instated.

Rockwell’s portrait of Kennedy is based on a Jacques Lowe photograph from his book, The Kennedy Years. Former Peace Corps workers posed for most of the figures. “In this sordid world of power struggles, politics and national rivalries the Peace Corps seems to stand almost alone,” wrote Rockwell to art director Allen Hurlburt, when he sent the picture to Look magazine.

Thanks to The Perfumed Dandy for inciting my curiosity about this theme:

Zelda Sayre Fitzgerald, who was considered the female embodiment of the Jazz Age.

“The only horrible thing in the world is ennui, Dorian. That is the one sin for which there is no forgiveness”, advised Lord Henry Wotton, Oscar Wilde’s alter ego from The Portrait of Dorian Gray. “Intelligent people never get bored,” said a character from Ifigenia, the novel by the French-Venezuelan writer Teresa de la Parra. Diana Vreeland suggested “Never fear being vulgar, just boring.” For Sir Cecil Beaton boredom was the world’s second worst crime (the first is being a bore). On the other hand, Leo Tolstoy affirmed that boredom was the desire for desires. And everyone would agree the cure for boredom is curiosity. There is no cure for curiosity. But we all are constantly escaping from ennui and feelings like that.

Being Boring is a song composed by Neil Tennant and Chris Lowe; the Pet Shop Boys. It is the opening track and second single from Behaviour (1990), an album influenced by Depeche Mode’s Violator, which was released the same year.

It’s been said that the title apparently materialized after someone in Japan accused the duo of being boring. The title is also derived from a Zelda Fitzgerald quotation, “she refused to be bored, chiefly because she wasn’t boring”. The song is concerned with the idea of growing up and how people’s perceptions and values change as they grow older.

Due to various factors (for example, it being hard to sing), it wasn’t initially performed on 1991’s Performance Tour, leading many fans, Axl Rose among them, to complain about its omission. It is considered among the greatest, most beautiful Pet Shop Boys’ songs, despite the track’s moderate commercial success.

The Pet Shop Boys first asked photographer and film maker Bruce Weber if he would make a video with them when Domino Dancing was corning out. They met him in New York whilst recording demos with Liza Minnelli. At the time he was keen, but too busy; he was working on his second documentary film, Let’s Get Lost, (a Film about the late jazz trumpeter Chet Baker. His first film was about boxing, Broken Noses).

Weber hadn’t done a video before because of “time and circumstance, and I also fell that I really wanted to fall in love with a song. Because I knew I was going to have to listen to it about a million times (laughs). I got the tape and I loved it; I had an immediate reaction to it. I thought it had a lot of musicality and a lot to say, I loved the lyrics and really felt that it was something I wanted to be part of.” he said to Neil and Lowe.

The video is shot in black and white. In what is either a coincidence or conscious decision, two previous videos, 1989’s It’s Alright and 1990’s So Hard also lacked color. Apart from these, only 2000’s You Only Tell Me You Love Me When You’re Drunk and partially 1987’s Rent were also recorded in black and white.

The video was filmed entirely in one day at the beginning of October 1990 in a house of Long Island. Bruce Weber chose that particular setting, outside New York City, because of its association with Zelda and Francis Scott Fitzgerald. Bruce Weber explained his idea of a wonderful party. He wanted to keep away from the streets after looking at MTV a lot of video clips filmed on roads. He thought it was a corny trend.

Weber cast people he was friends with or knew the girlfriends or boyfriends of or had photographed before, including Neneh Cherry’s half-brother, musician Eagle Eye and Drena, Robert de Niro‘s daughter.

Weber incorporated a dog because “in certain French films of Renoir there was always a country animal brought as a pet. Like the Bertolucci film where Dominique Sandra comes into the house on a horse.”

Originally, the video begun with everyone on the stairs, eyes closed and Neil speaking the Zelda Fitzgerald quote to the camera. This concept turned out to be a bit too complicated so the video eventually began with a handwritten message (written by one of Bruce Weber’s friends) based on Neil’s instructions.

In a way, the video is a literal projection of the first video of the song. The video begins with with a nude swimmer and a message: “I came from Newcastle in the North of England. We used to have lots of parties where everyone got dressed up and on one party invitation was the quote ‘she was never bored because she was never boring’. The song is about growing up – the ideals that you have when you’re young and how they turn out”.

“Before I loved you, Love, nothing was my own:

I wavered through the streets, among objects:

nothing mattered or had a name:

the world was made of air, which waited.”

“This must be the wood,’ she said thoughtfully to herself, ‘where
things have no names. I wonder what’ll become of MY name when I go in?
I shouldn’t like to lose it at all–because they’d have to give me
another, and it would be almost certain to be an ugly one. But then
the fun would be trying to find the creature that had got my old
name! That’s just like the advertisements, you know, when people lose
dogs…” 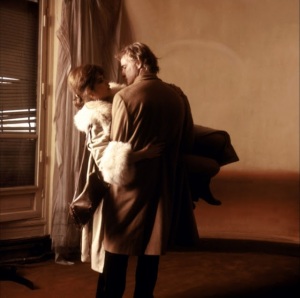 – Do you want to know mine?

– Nothing. You and I are gonna meet here without knowing anything that goes on outside here. OK?

-Because… Because we don’t need names here. Don’t you see? We’re gonna forget… everything that we knew. Every… All the people,… all that we do,… wherever we live.

“When Jose Arcadio Buendia realized that the plague had invaded the town, he gathered together the heads of families to explain to them what he knew about the sickness of insomnia, and they agreed on methods to prevent the scourge from spreading to other towns in the swamp. That was why they took the bells off the goats, bells that the Arabs had swapped them for macaws, and put them at the entrance to town at the disposal of those who would not listen to the advice and entreaties of the sentinels and insisted on visiting the town. All strangers who passed, through the streets of Macondo at that time had to ring their bells so that the sick people would know that they were healthy. They were not allowed to eat or drink anything during their stay, for there was no doubt but that the illness was transmitted by mouth, and all food and drink had been contaminated by insomnia. In that way they kept the plague restricted to the perimeter of the town. So effective was the quarantine that the day came when the emergency situation was accepted as a natural thing and life was organized in such a way that work picked up its rhythm again and no one worried any more about the useless habit of sleeping. 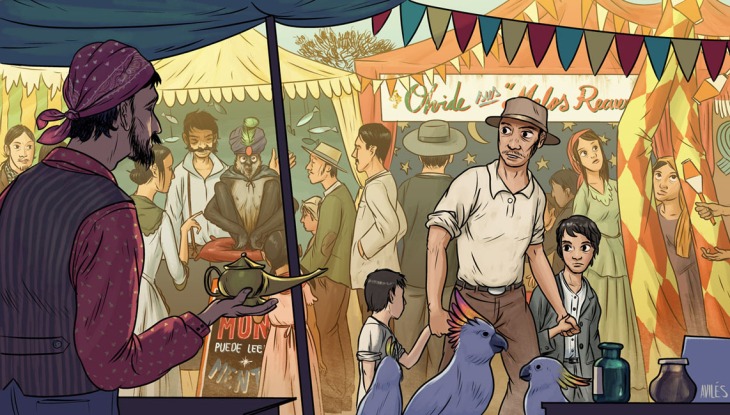 It was Aureliano who conceived the formula that was to protect them against loss of memory for several months. He discovered it by chance. An expert insomniac, having been one of the first, he had learned the art of silver work to perfection. One day he was looking for the small anvil that he used for laminating metals and he could not remember its name. His father told him: “Stake.” Aureliano wrote the name on a piece of paper that he pasted to the base of the small anvil: stake. In that way he was sure of not forgetting it in the future. It did not occur to him that this was the first manifestation of a loss of memory, because the object had a difficult name to remember. But a few days later he discovered that he had trouble remembering almost every object in the laboratory. Then he marked them with their respective names so that all he had to do was read the inscription in order to identify them. When his father told him about his alarm at having forgotten even the most impressive happenings of his childhood, Aureliano explained his method to him, and Jose Arcadio Buendia put it into practice all through the house and later on imposed it on the whole village. With an inked brush he marked everything with its name: table, chair; clock, door; wall, bed, pan. He went to the corral and marked the animals and plants: cow, goat, pig, hen, cassava, caladium, banana. Little by little, studying the infinite possibilities of a loss of memory, he realized that the day might come when things would be recognized by their inscriptions but that no one would remember their use. Then he was more explicit. The sign that he hung on the neck of the cow was an exemplary proof of the way in which the inhabitants of Macondo were prepared to fight against loss of memory: This is the cow. She must be milked every morning so that she will produce milk, and the milk must be boiled in order to be mixed with coffee to make coffee and milk. Thus they went on living in a reality that was slipping away, momentarily captured by words, but which would escape irremediably when they forgot the values of the written letters.”