Jacques Bridaine
From The Belfry Of Bruges (Songs) 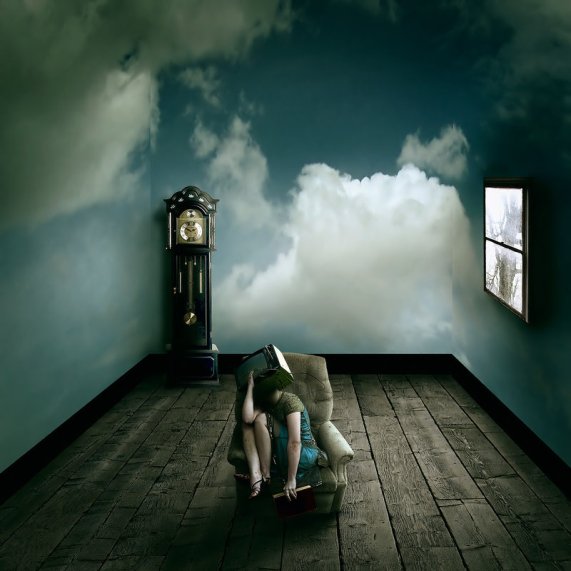 Tales from the Hidden Attic, photo by Michael Vincent Manalo

Somewhat back from the village street
Stands the old-fashioned country-seat.
Across its antique portico
Tall poplar-trees their shadows throw;
And from its station in the hall
An ancient timepiece says to all,–
“Forever–never!
Never–forever!”

Half-way up the stairs it stands,
And points and beckons with its hands
From its case of massive oak,
Like a monk, who, under his cloak,
Crosses himself, and sighs, alas!
With sorrowful voice to all who pass,–
“Forever–never!
Never–forever!”

By day its voice is low and light;
But in the silent dead of night,
Distinct as a passing footstep’s fall,
It echoes along the vacant hall,
Along the ceiling, along the floor,
And seems to say, at each chamber-door,–
“Forever–never!
Never–forever!”

Through days of sorrow and of mirth,
Through days of death and days of birth,
Through every swift vicissitude
Of changeful time, unchanged it has stood,
And as if, like God, it all things saw,
It calmly repeats those words of awe,–
“Forever–never!
Never–forever!”

In that mansion used to be
Free-hearted Hospitality;
His great fires up the chimney roared;
The stranger feasted at his board;
But, like the skeleton at the feast,
That warning timepiece never ceased,–
“Forever–never!
Never–forever!”

There groups of merry children played,
There youths and maidens dreaming strayed;
O precious hours! O golden prime,
And affluence of love and time!
Even as a Miser counts his gold,
Those hours the ancient timepiece told,–
“Forever–never!
Never–forever!”

From that chamber, clothed in white,
The bride came forth on her wedding night;
There, in that silent room below,
The dead lay in his shroud of snow;
And in the hush that followed the prayer,
Was heard the old clock on the stair,–
“Forever–never!
Never–forever!”

All are scattered now and fled,
Some are married, some are dead;
And when I ask, with throbs of pain.
“Ah! when shall they all meet again?”
As in the days long since gone by,
The ancient timepiece makes reply,–
“Forever–never!
Never–forever!

Never here, forever there,
Where all parting, pain, and care,
And death, and time shall disappear,–
Forever there, but never here!
The horologe of Eternity
Sayeth this incessantly,–
“Forever–never!
Never–forever!”

“And the great elms o’erhead
Dark shadows wove on their aërial looms,
Shot through with golden thread.”

“In crystal vapour everywhere
Blue isles of heaven laughed between
And far, in forest-deeps unseen,
The topmost elm-tree gather’d green
From draughts of balmy air”

Let’s analyze again from where Alexander McQueen drew inspiration for his 2008-2009 Autumn/Winter Collection.

“I’ve got a 600-year-old elm tree in my garden and I made up this story of a girl who lives in it and comes out of the darkness to meet a prince and become a queen”, he claimed, was the seed of the narrative his collection would branch out from.

McQueen was an egghead, I mean, a true intellectual, especially when he was searching out information about a concept for any of his fashion collections and I’m certain, because of this, he was aware of the mythological and religious connections behind The Girl Who Lived in The Tree.

Ἁμαδρυάδες (Hamadryads) according to Greek mythology are mostly female beings that live in a tree, in fact they are bonded to a particular tree. Some believe that hamadryads are the actual tree, while normal dryads are simply the entities, or spirits, of the trees. If the tree died, the hamadryad associated with it died as well. For that reason, dryads and the gods punished any mortals who harmed trees.

The first reference in literature to elms occurs in the epic poem attributed to Homer, Iliad. When Eetion, father of Andromache, is killed by Achilles during the Trojan War, the Mountain Nymphs plant elms on his tomb. Also in the Iliad, when the River Scamander, indignant at the sight of so many corpses in his water, overflows and threatens to drown Achilles, the latter grasps a branch of a great elm in an attempt to save himself.

But specifically, Deipnosophistae of Athenaeus (The Banquet of the Learned or Philosophers at Dinner) an ancient Greek text written in the early 3rd century AD, lists eight Hamadryads, the daughters of Oxylus and Hamadryas. And Ptelea is the name given to the hamadryad bonded to the Elm, a hermaphroditic tree comprising the genus Ulmus in the plant family Ulmaceae.

Arthur Hughes. Back from Sea, 1862. The characters of this painting are resting under a Ulmus procera