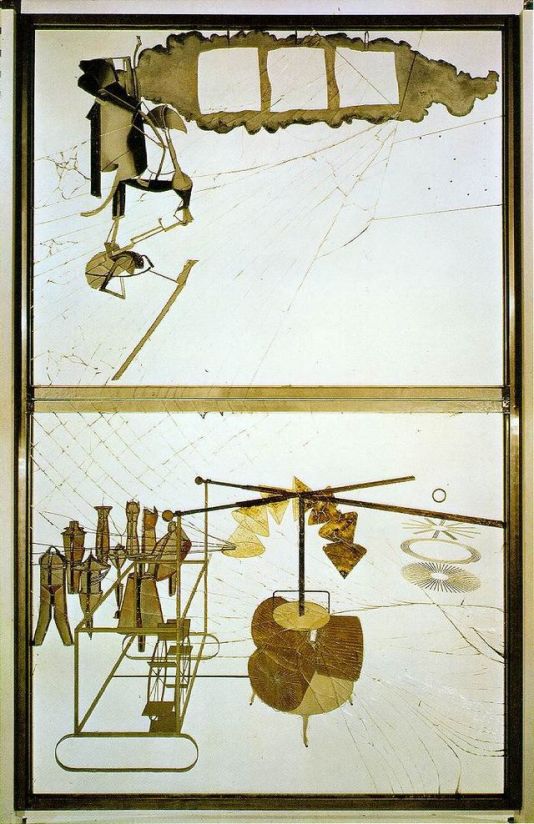 The Bride Stripped Bare by Her Bachelors, Even (La mariée mise à nu par ses célibataires, même), most often called The Large Glass (Le Grand Verre), is an artwork by Marcel Duchamp over nine feet (2.75 metres) tall, and freestanding. Duchamp worked on the piece from 1915 to 1923, creating two panes of glass with materials such as lead foil, fuse wire, and dust. It combines chance procedures, plotted perspective studies, and laborious craftsmanship. Duchamp’s ideas for the Glass began in 1913, and he made numerous notes and studies, as well as preliminary works for the piece. The notes reflect the creation of unique rules of physics, and myth which describes the work.

It is at first sight baffling in iconograhy and unclassifiable style. Yet this glass construction is not a discrete whole. The Bride Stripped Bare by Her Bachelors, Even is also the title given to The Green Box notes (1934) as Duchamp intended the Large Glass to be accompanied by a book, in order to prevent purely visual responses to it. The notes describe that his “hilarious picture” is intended to depict the erotic encounter between the “Bride,” in the upper panel, and her nine “Bachelors” gathered timidly below in an abundance of mysterious mechanical apparatus in the lower panel. The Large Glass was exhibited in 1926 at the Brooklyn Museum before it was broken during transport and carefully repaired by Duchamp. It is now part of the permanent collection at the Philadelphia Museum of Art. Duchamp sanctioned replicas of The Large Glass, the first in 1961 for an exhibition at Moderna Museet in Stockholm and another in 1966 for the Tate Gallery in London. The third replica is in Komaba Museum, University of Tokyo.

Duchamp’s art does not lend itself to simple interpretations, and The Large Glass is no exception. Most critics, however, read the piece as an exploration of male and female desire as they complicate each other. One critic, for example, describes the basic layout as follows: “The Large Glass has been called a love machine, but it is actually a machine of suffering. Its upper and lower realms are separated from each other forever by a horizon designated as the ‘bride’s clothes.’ The bride is hanging, perhaps from a rope, in an isolated cage, or crucified. The bachelors remain below, left only with the possibility of churning, agonized masturbation.”

However, modern critics see the painting as an expression of the artist to ridicule criticism. Marjorie Perloff interprets the painting as “enigmatic” in her book The Poetics of Indeterminacy: Rimbaud to Cage (Princeton UP: 1999). She concludes that Duchamp’s “Large Glass is also a critique of the very criticism it inspires, mocking the solemnity of the explicator who is determined to find the key”. Hence, she follows the school of deconstruction established by the French philosopher Jacques Derrida and helps to break down the hegemony of interpretation held by the Enlightenment bourgeoisie. To quote the artist: “I believe that the artist doesn’t know what he does. I attach even more importance to the spectator than to the artist.” 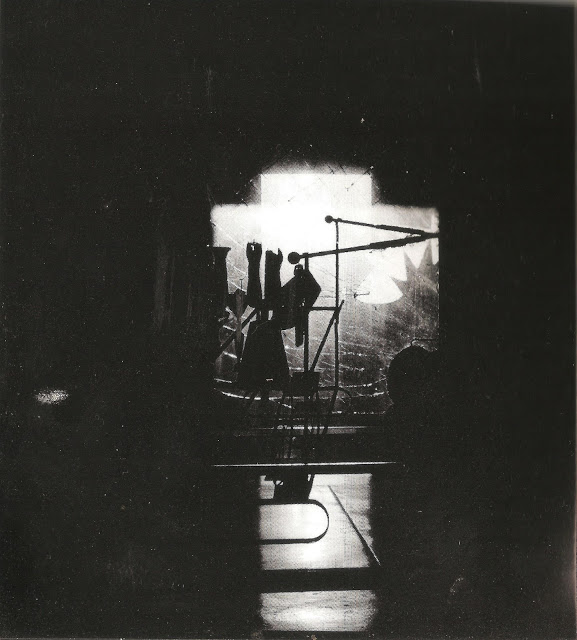 “Before the law sits a gatekeeper. To this gatekeeper comes a man from the country who asks to gain entry into the law. But the gatekeeper says that he cannot grant him entry at the moment. The man thinks about it and then asks if he will be allowed to come in later on. “It is possible,” says the gatekeeper, “but not now.” At the moment the gate to the law stands open, as always, and the gatekeeper walks to the side, so the man bends over in order to see through the gate into the inside. When the gatekeeper notices that, he laughs and says: “If it tempts you so much, try it in spite of my prohibition. But take note: I am powerful. And I am only the most lowly gatekeeper. But from room to room stand gatekeepers, each more powerful than the other. I can’t endure even one glimpse of the third.” The man from the country has not expected such difficulties: the law should always be accessible for everyone, he thinks, but as he now looks more closely at the gatekeeper in his fur coat, at his large pointed nose and his long, thin, black Tartar’s beard, he decides that it would be better to wait until he gets permission to go inside. The gatekeeper gives him a stool and allows him to sit down at the side in front of the gate. There he sits for days and years. He makes many attempts to be let in, and he wears the gatekeeper out with his requests. The gatekeeper often interrogates him briefly, questioning him about his homeland and many other things, but they are indifferent questions, the kind great men put, and at the end he always tells him once more that he cannot let him inside yet. The man, who has equipped himself with many things for his journey, spends everything, no matter how valuable, to win over the gatekeeper. The latter takes it all but, as he does so, says, “I am taking this only so that you do not think you have failed to do anything.” During the many years the man observes the gatekeeper almost continuously. He forgets the other gatekeepers, and this one seems to him the only obstacle for entry into the law. He curses the unlucky circumstance, in the first years thoughtlessly and out loud, later, as he grows old, he still mumbles to himself. He becomes childish and, since in the long years studying the gatekeeper he has come to know the fleas in his fur collar, he even asks the fleas to help him persuade the gatekeeper. Finally his eyesight grows weak, and he does not know whether things are really darker around him or whether his eyes are merely deceiving him. But he recognizes now in the darkness an illumination which breaks inextinguishably out of the gateway to the law. Now he no longer has much time to live. Before his death he gathers in his head all his experiences of the entire time up into one question which he has not yet put to the gatekeeper. He waves to him, since he can no longer lift up his stiffening body. The gatekeeper has to bend way down to him, for the great difference has changed things to the disadvantage of the man. “What do you still want to know, then?” asks the gatekeeper. “You are insatiable.” “Everyone strives after the law,” says the man, “so how is that in these many years no one except me has requested entry?” The gatekeeper sees that the man is already dying and, in order to reach his diminishing sense of hearing, he shouts at him, “Here no one else can gain entry, since this entrance was assigned only to you. I’m going now to close it.” 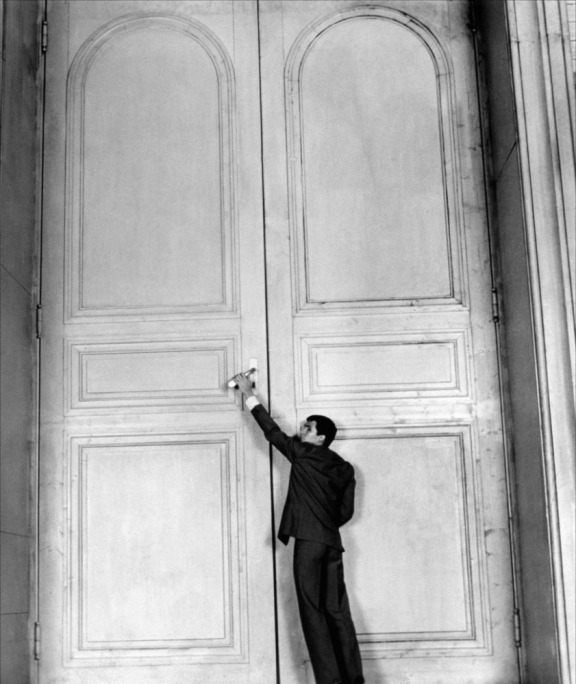 The fable is referenced and reworked in the penultimate chapter of J.M. Coetzee‘s novel Elizabeth Costello. Jacques Derrida‘s essay of the same name examines the meta-fictional aspects within the structure and content of Kafka’s fable (for instance the situation of the title before the body of the text and also within the first line of the text itself). Derrida’s essay incorporates Immanuel Kant‘s notion of the categorical imperative as well as Freudian psychoanalysis in its reading of Kafka’s fable. The section clearly demonstrates the concept of existentialism, as the man from the country can only enter the gate using his own, individual path.