The Four Freedoms theme was derived from the 1941 State of the Union Address by United States President Franklin Delano Roosevelt delivered to the 77th United States Congress on January 6, 1941. During the speech he identified four essential human rights (Freedom of Speech, Freedom of Worship, Freedom From Want and Freedom From Fear) that should be universally protected. Roosevelt’s message was as follows: “In the future days which we seek to make secure, we look forward to a world founded upon four essential human freedoms.”

This series is a cornerstone of a retrospective of the career of Rockwell,who was the most widely known contemporary commercial artist of the mid 20th century, but who failed to achieve critical acclaim commensurate with his popularity. These are perhaps Rockwell’s most well-known works of art, and they were the most widely distributed paintings ever produced by some accounts. At one time they were commonly displayed in post offices, schools, clubs, railroad stations, and a variety of public and semi-public buildings. Critical review of these images, like most of Rockwell’s work, has not been entirely positive. Rockwell’s idyllic and nostalgic approach to regionalism made him a popular illustrator but a lightly regarded fine artist during his lifetime. These paintings generally are viewed with this sentiment. However, he has created a niche in the enduring social fabric with the Freedom from Want image which is emblematic of what is now known as the “Norman Rockwell Thanksgiving.”

Freedom From Want, Normal Rockwell.  Published in the March 6, 1943, issue of The Saturday Evening Post with a matching essay by Carlos Bulosan as part of the Four Freedoms series.

The painting was included as the cover image of the 1946 book Norman Rockwell, Illustrator, written when Rockwell was “at the height of his fame as America’s most popular illustrator.” Although the image was popular in the United States it caused resentment in Europe where the masses were enduring hardship at the time.

Rockwell had sketched the Four Freedoms in charcoal and sought a commission from the Office of War Information, but was denied, “The last war you illustrators did the posters. This war we’re going to use fine artists men, real artists.” However, Saturday Evening Post editor, Ben Hibbs, recognized the potential of the set and encouraged him to produce them right away. Rockwell claimed to have painted the turkey on Thanksgiving Day, and said that unlike Freedom of Speech and Freedom of Worship, this painting was not difficult to execute. He depicted the setting of his own living room with the painting and relied on neighbors for advice as well as critical commentary and their service as his models. 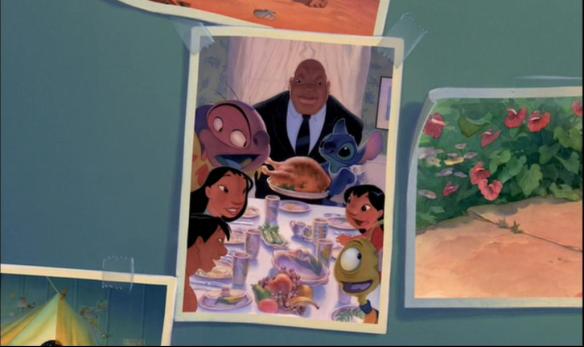 In The Walt Disney Company film Lilo & Stitch (Chris Sanders and Dean DeBlois, 2002) , a montage of images prior to the end credits includes an homage of Freedom from Want featuring the characters of the film