In “Rocky Horror; From Concept to Cult“, designer Sue Blane discusses the Rocky Horror costumes’ influence on punk music style. “[It was a] big part of the build up [to punk].” She states that ripped fishnet stockings, glitter and coloured hair were directly attributable to Rocky Horror.

Some of the costumes from the film had been originally used in the stage production. Props and set pieces were reused from old Hammer productions and others. The tank and dummy used for Rocky’s birth originally appeared in The Revenge of Frankenstein. These references to older productions, in addition to cutting costs, enhanced the status of the film.
Costume designer Sue Blane wasn’t keen on designing for the film until she realized Tim Curry, an old friend, was doing the show. Tim and Blane had worked together in Glasgow’s Citizen Theatre in a production of The Maids, where Curry had worn a woman’s corset in the production. Blane arranged it with the theatre to loan her the corset from the other production for Rocky Horror. Blane admits that she did not conduct research for her designing and had never seen a science fiction film, and is acutely aware that her costumes for Brad and Janet may have been generalizations. 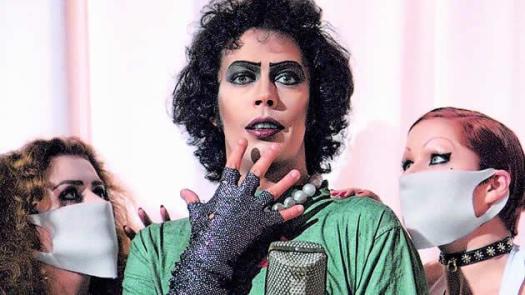 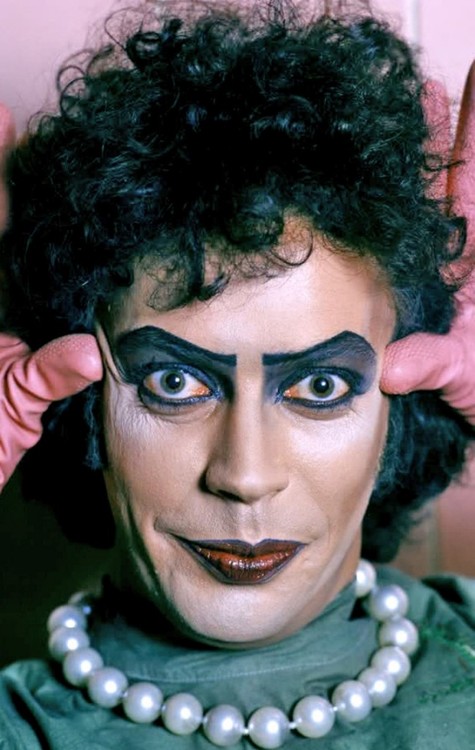 Tim Curry’s character Dr. Frankenfurter is dressed in a style similar to Jacqueline Kennedy Onassis’ when the main characters first come up to his lab.

Tim Curry and Peter Robb-King (assistant makeup artist to Pierre La Roche on The Rocky Horror Picture Show). In the stage productions, actors generally did their own makeup. However, for the film, the producers chose Pierre La Roche, who had previously been a makeup artist for Mick Jagger, to redesign the makeup for each character. Production stills were taken by rock photographer Mick Rock, who has published a number of books from his work.

The astral sphere make-up on Bowie’s forehead was designed by Laroche for the Ziggy Stardust persona. Ziggy’s make up on stage also had a lot of Kabuki influences.

Pin Ups (1973), the seventh album by David Bowie, containing cover versions of songs. The woman on the cover with Bowie is 1960s supermodel Twiggy in a photograph taken by her then-manager Justin de Villeneuve. It was taken in Paris for Vogue magazine, but at Bowie’s request, used for the album instead

Mick Jagger put himself on the hands of Laroche during the Rolling Stones Tour of the Americas, 1975. Photo: Christopher Simon Sykes

Mick Jagger leans on his stylist Pierre Laroche during the Rolling Stones Tour of the Americas, 1975. Laroche wears a t-shirt with the slogan ‘Who the Fuck is Mick Jagger?’ Photo by Christopher Simon Sykes

Following a lonely childhood in exotic Algiers, Pierre Laroche moved to France and then England, where he became the star make-up artist at Elizabeth Arden in London. Quitting after five years when the company insisted he become more conservative, Laroche went freelance and was soon contracted by rock stars David Bowie and Mick Jagger, who drew upon Laroche’s talent while he continued to do make-up for British fashion magazines, celebrities, and movie stars. During the sixties, inspired by the Arab women of his homeland who painted their eyes black with khool, Laroche popularized black eye-shadow and originated the glitter look. Later, he moved to America, where he reorganized his professional approach to include make-up for all kinds of women—and men. Though he recently did Bianca Jagger’s make-up for the cover of People magazine, Elsa Peretti’s make-up for Helmut Newton’s photograph of her in the April 4 issues of Newsweek, and has worked with Nona Hendryx on major make-up projects, Laroche is equally interested in designing make-up for the “average woman”. Intent on contributing to the American chic, Laroche asserts, “I have lived through the sixties in England. Now I’m getting ready to face the eighties in America.”

The Rocky Horror Picture Show is a 1975 musical comedy horror film directed by Jim Sharman. The screenplay was written by Sharman and Richard O’Brien based on the 1973 eponymous musical stage production, also written by O’Brien. The production is a humorous tribute to the science fiction and horror B movies of the late 1930s through early 1970s. It stars Tim Curry, Susan Sarandon and Barry Bostwick along with cast members from the original Royal Court Theatre, Roxy Theatre and Belasco Theatre productions. The film production retains many aspects from the stage version such as production design and music, but features new scenes added not in the stage play. The originally proposed opening sequence was to contain clips of various films mentioned in the lyrics, as well as the first few sequences shot in black and white, but this was deemed too expensive, and scrapped.

Although largely ignored upon release, it soon gained notoriety as a midnight movie when audiences began participating with the film at the Waverly Theater in New York City in 1976. Audience members returned to the cinemas frequently and talked back to the screen and began dressing as the characters, spawning similar performance groups across the United States. Still in limited release nearly four decades after its premiere, it has the longest-running theatrical release in film history. Today, the film has a large international cult following and is one of the most well-known and financially successful midnight movies of all time.

Richard O’Brien, a Briton raised in New Zealand, was living in London as an unemployed actor in the early 1970s. He wrote most of The Rocky Horror Show during one winter just to occupy himself. Since his youth, O’Brien had loved science fiction and B horror movies. He wanted to combine elements of the unintentional humour of B horror movies, portentous dialogue of schlock-horror, Steve Reeves muscle flicks and fifties rock and roll into his musical.

O’Brien showed a portion of the unfinished script to Australian director Jim Sharman, who decided to direct it at the small experimental space Upstairs at the Royal Court Theatre, Sloane Square, Chelsea, which was used as a project space for new work. O’Brien had appeared briefly in Andrew Lloyd Webber‘s Jesus Christ Superstar, directed by Sharman and the two also worked together in Sam Shepard‘s The Unseen Hand. Sharman would bring in production designer Brian Thomson. The original creative team was then rounded out by costume designer Sue Blane and musical director Richard Hartley, and stage producer Michael White was also brought in to produce. As the musical went into rehearsal, the working title, They Came from Denton High, was changed just before previews at the suggestion of Sharman to The Rocky Horror Show.