“He made the shoes larger than life and gave them a personality,” said Donna De Salvo, chief curator at the Whitney Museum of American Art in New York City. “He makes them into portraits without a face and turns them into objects of desire. He understood how images drive the world.”
Donna De Salvo
(about Andy Warhol’s obsession for shoes)

Heels, flats, boots. Whatever. And like his later obsessions with soup cans, Brillo boxes and Marilyn Monroe, his footwear fetish became the stuff of art.

During the 1950s, Warhol gained fame for his whimsical ink drawings of shoe advertisements. These were done in a loose, blotted-ink style, and figured in some of his earliest showings at the Bodley Gallery in New York. With the concurrent rapid expansion of the record industry and the introduction of the vinyl record, Hi-Fi, and stereophonic recordings, RCA Records hired Warhol, along with another freelance artist, Sid Maurer, to design album covers and promotional materials.

Warhol was an early adopter of the silk screen printmaking process as a technique for making paintings. His earliest silk screening in painting involved hand-drawn images though this soon progressed to the use of photographically derived silk screening in paintings. Prior to entering the field of fine art, Warhol’s commercial art background also involved innovative techniques for image making that were somewhat related to printmaking techniques. When rendering commercial objects for advertising Warhol devised a technique that resulted in a characteristic image. His imagery used in advertising was often executed by means of applying ink to paper and then blotting the ink while still wet. This was akin to a printmaking process on the most rudimentary scale. 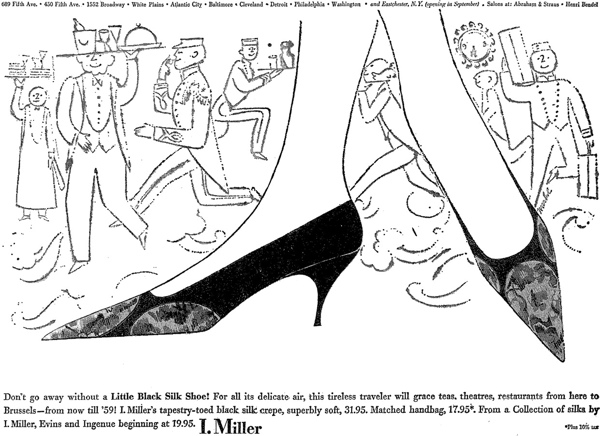 By the beginning of the 1960s, Warhol had become a very successful commercial illustrator. His detailed and elegant drawings for I. Miller shoes were particularly popular. They consisted mainly of “blotted ink” drawings (or monoprints), a technique which he applied in much of his early art. Although many artists of this period worked in commercial art, most did so discreetly. Warhol was so successful, however, that his profile as an illustrator seemed to undermine his efforts to be taken seriously as an artist.

Since he considered him a great inspiration for his works, David Bowie introduced a B-side on his album Honky Dory (1971) called Andy Warhol.

In his 2003 interview with Performing Songwriter magazine, Bowie explained that he had not met Warhol when he wrote this song and he got an interesting reaction when he played it for him. Said Bowie: “I took the song to The Factory when I first came to America and played it to him, and he hated it. Loathed it. He went [imitates Warhol’s blasé manner] ‘Oh, uh-huh, okay…’ then just walked away (laughs). I was left there. Somebody came over and said, ‘Gee, Andy hated it.’ I said, ‘Sorry, it was meant to be a compliment.’ ‘Yeah, but you said things about him looking weird. Don’t you know that Andy has such a thing about how he looks? He’s got a skin disease and he really thinks that people kind of see that.’ I was like, ‘Oh, no.’ It didn’t go down very well, but I got to know him after that. It was my shoes that got him. That’s where we found something to talk about. They were these little yellow things with a strap across them, like girls’ shoes. He absolutely adored them. Then I found out that he used to do a lot of shoe designing when he was younger. He had a bit of a shoe fetishism. That kind of broke the ice. He was an odd guy.

A renegade who created alter egos to complement his music, Bowie never stopped experimenting with avant-garde clothes and footwear. Where others were measured or manufactured, he was a fearless original who shot from his slim androgynous hip, using a special shoe or statement ensemble as an extension of his indelible art. His early ’70s incarnation, Ziggy Stardust, had a love of star-spangled and glittery boots. Bowie had said he took cues from sci-fi novels and Japanese theater. Everyone from Tommy Hilfiger to Marc Jacobs and Jean Paul Gaultier has shown their version of Ziggy. On the red carpet and off, Cara Delevingne and Chiara Ferragni have worn looks in this vein.

In 1976, Bowie unveiled The Thin White Duke, which inspired a whole generation to embrace a more sleekly suited and booted sensibility with a futuristic twist. Runways from Celine to Chanel and Balmain have shown collections that riffed on this theme. And Carine Roitfeld often dresses in a style not unlike this. The footwear was often all-white, block-heeled or platformed. Laurence Dacade did a pair of boots in an apparent homage for spring ’16.

Warhol ought to have solarized Bowie using one of his patent silk screening techniques, but Bowie was already a solarized image, a diffraction of light infusing every pore of artistic life of his time. Bowie was a shoe aficionado and when he met Warhol they found a common ground. A ground made of stardust on which to walk and leave the foot-marks of their art.

“I started as a writer for magazines, and soon they asked me to illustrate my stories. I started from the bottom of the bottom. And I climbed the stairs, one by one.” 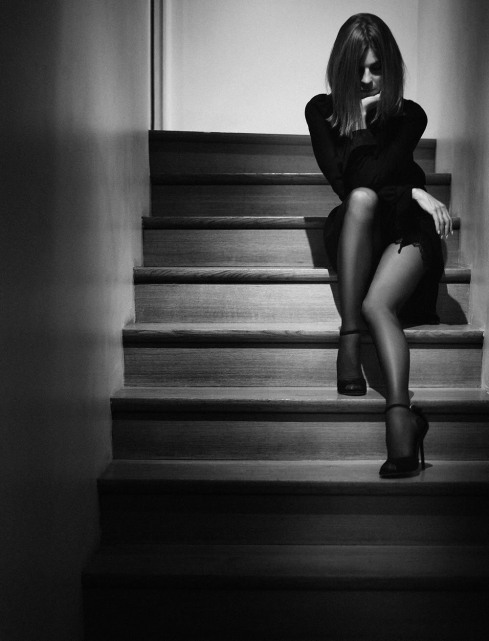 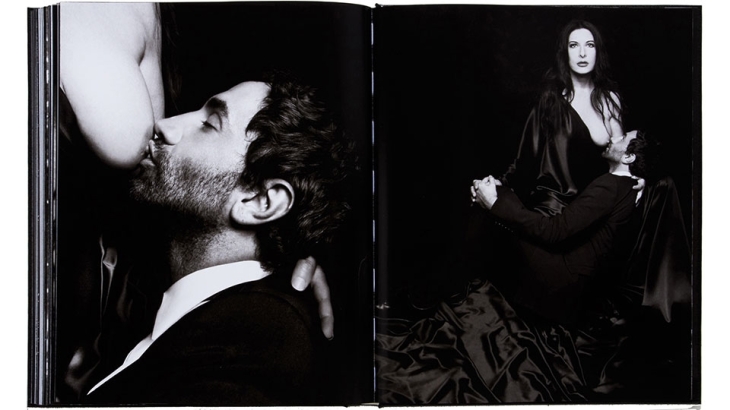 No designer draws on religious themes to quite such glorious effect as Givenchy’s Riccardo Tisci. Thus, it made perfect sense that Tisci came on board to guest-edit Visionaire’s 60th issue, RELIGION. Housed inside a distressed wood case lined in black Plexiglas, a book of images revealed Tisci’s world and the inspiration behind his work. Naturally, the works were loaded with symbolism, like a photo of Tisci suckling at the teat of Marina Abramovic — an image the performance artist says echoed the relationship between art and fashion. “When Riccardo was asked who I wanted to collaborate with,” Abramovic recalls, “I said the only thing I want is to collaborate with you. That was my ultimatum. I said to him, This is the situation: do you admit that fashion is inspired by art? Well I am the art, you are the fashion, now suck my tits! He’s very shy, so it took him a while to come around. But he did. During the shoot, I wanted to be in a state of mind as if I were delivering the emotions of the artist whose work is being used as inspiration—luminous yet strong. Art is giving. Art is nourishing. Art is oxygen to society. I was thinking what the title would be, and I thought of The Contract.” For Tisci, it was an opportunity to meditate on his past and present. “Visionaire was a truly important moment of reflection for me,” he says. “This collection of work celebrates inner truths, inner dialogues, and moments which words cannot quantify.”

Riccardo Tisci explores “religion as liberating force, complete with its share of saints, sinners, and supermodels.” However vaguely Tisci sees his own faith, his Visionaire is Catholic with a capital C, featuring eye-popping imagery that turns a millennium of European art on its head. Housed in an unfolding wooden case that nods to the great tradition of the altarpiece, the issue doesn’t scrimp on saints, including Carine Roitfeld, appropriately venerated in a series of haunting portraits by Karl Lagerfeld. (“Religion is anything you believe in,” the Chanel designer offers.)

The rest of the issue is an exuberant visual tribute to religious tropes. The Madonna and Child are revisited by Mario Sorrenti, and while she’s not exactly Rubenesque, there’s a certain minimalist serenity about her that beguiles. Paolo Canevari and Francesco Carrozzini canonize Franca Sozzani, complete with a Giotto-like halo, while Tisci’s house model, Lea T, is reimagined by Giovanna Battaglia and Pierpaolo Ferrari as a beautiful veiled martyr in Renaissance-style couture. The Son then comes into his own as Danko and Ana Steiner and Jared Buckheister rework the crucifixion, mounting Jesus on—or is it at—a lectern. Some of the pictures are slightly less tranquil. The shoot by Mert Alas & Marcus Piggott of Lara Stone bound in ropes beside a burning cross conjures both Saint Joan and Mississippi Burning. But perhaps the most indelible image is that of Tisci suckling at the breast of Marina Abramovic, a woman who knows a thing or two about suffering for belief. 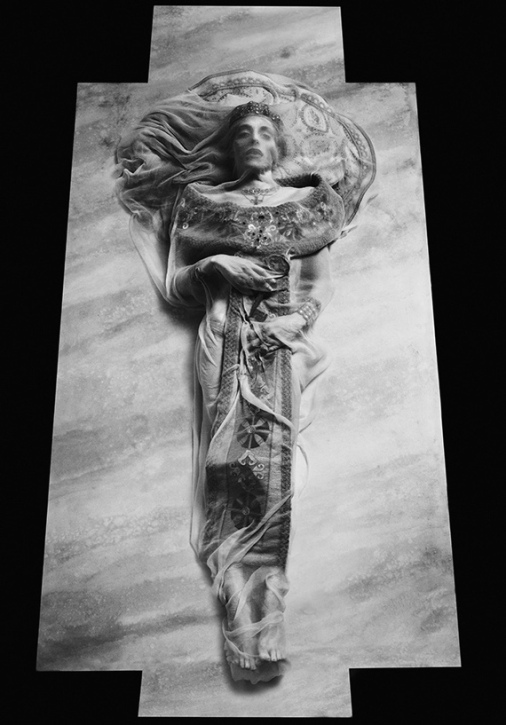 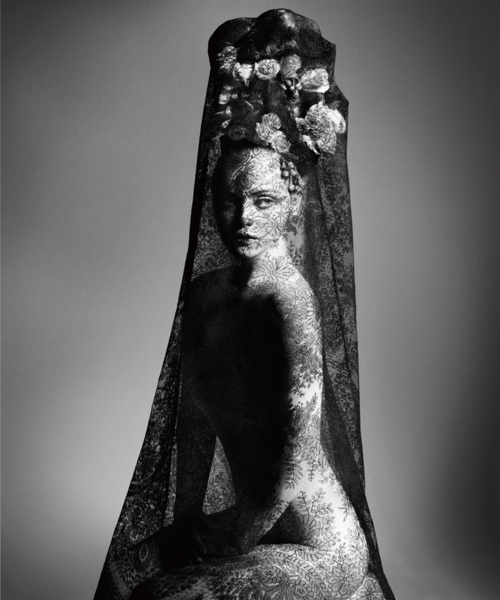