Monument to Balzac is a sculpture by Auguste Rodin in memory of the French novelist Honoré de Balzac. According to Rodin, the sculpture aims to portray the writer’s persona rather than a physical likeness. The work was commissioned in 1891 by the Société des Gens de Lettres, a full-size plaster model was displayed in 1898 at a Salon in Champ de Mars. After coming under criticism the model was rejected by the société and Rodin moved it to his home in Meudon. On July 2, 1939 (22 years after the sculptor’s death) the model was cast in bronze for the first time and placed on the Boulevard du Montparnasse at the intersection with Boulevard Raspail.

The Société des Gens de Lettres (Paris, France) considered four different artists for the sculptural work before it was given to Rodin. The first was French neoclassical artist Henri Chapu, however, Chapu died in 1891 before the work could be finalized. Marquet de Vasselot was the next artist considered for the sculpture and provided a bust of the writer for the Societé. At the same time artists Millet and Coutan also applied for the commission.

Rodin was not initially considered for the work because at that point in time, around 1885, his career had not become as prominent. After the death of Chapu, the recently elected president of the Societé, Émile Zola strongly supported Rodin for the job and, so, the artist submitted a proposal to have a completed three-meter statue of the French novelist within an eighteen-month period which was approved.

The commission was in response to the elevated importance of Honoré de Balzac after his death. Balzac was one of the founders of the Societé as well as the second president of the organization. Upon his death in 1850 interest in creating a statue to commemorate the writer quickly developed under the leadership of Alexandre Dumas, père.

In 1894, the Societé threatened to step in legally with the commission, turn the job over to artist Alexandre Falguière and take away Rodin’s payment. Yet Rodin continued to ask for extensions on time making over fifty studies and continuously distanced himself from a true physical portrayal, tending towards a more psychological representation. The artist became infatuated with capturing the essence of the author’s strength. In a message to writer Charles Chincholle in May, 1898, Rodin explained his artistic pursuit:

“The only thing I realize today is that the neck is too strong. I thought I had to enlarge it because according to me, modern sculpture must exaggerate the forms form the moral point of view. Through the exaggerated neck I wanted to represent strength I realize that the execution exceeded the idea.”

Finally in 1898, Rodin presented a plaster study of the Balzac statue in the Salon de la Société Nationale des Beaux-Arts. The sculpture was not received well by the critics; Rodin took the negativity as a personal attack. Many disliked the grotesque stature of the figure while others criticized the work to be very similar to that of the Italian impressionist Medardo Rosso. As well, reports surfaced before the unveiling of the sculpture regarding anticipated dismay over the final outcome of the artwork. The Société des Gens de Lettres decided to disregard the commission to Rodin and not accept the sculpture.

Regardless of rejection from his commissionaires, contemporaries such as Paul Cézanne, Henri de Toulouse-Lautrec and Claude Monet supported Rodin in his point of view. A backlash against the rejection along with a petition signed by supporters in the artistic community proceeded, yet in the end, Rodin decidedly declined any bids for the work and placed the plaster artwork in his home at Meudon.

“Is it happiness that makes us so light?” 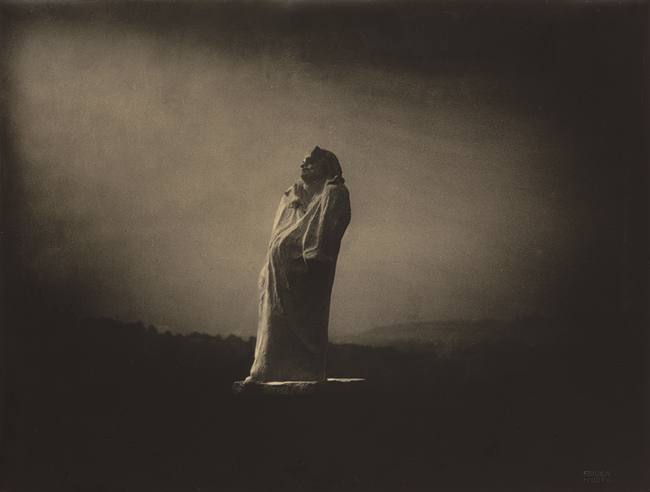 Balzac Toward the Light Midnight, Photograph by Edward Steichen, 1908

“I don’t care about making photography an art. I want to make good photographs. I’d like to know who first got it into his head that dreaminess and mist is an art. Take things as they are; take good photographs and the art will take care of itself.” 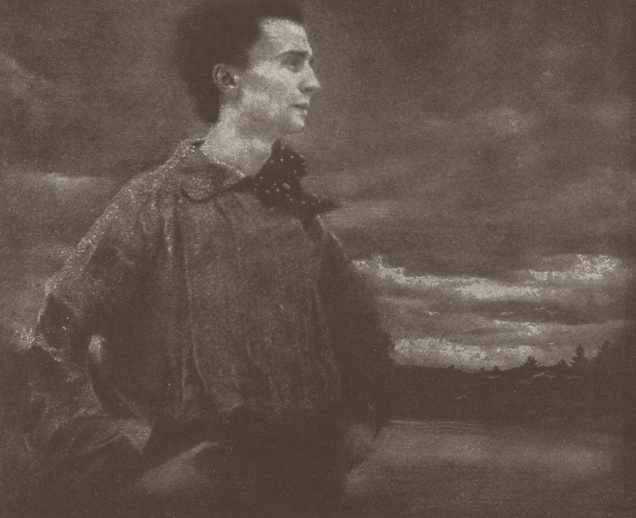 “When I first became interested in photography… my idea was to have it recognized as one of the fine arts. Today I don’t give a hoot in hell about that. The mission of photography is to explain man to man and each man to himself. And that is the most complicated thing on earth and also as naïve as a tender plant.”

Serendipity can sometimes play a major role in artistic creation. Such was the case in this photograph of The Age of Bronze , taken by Eugène Druet in 1898.

One day, the photographer came across an effect now known as “solarization”. If a chlorobromide paper is exposed to the light while it is being developed in the darkroom (which may happen when the door is inadvertently opened), parts of the image will come out negative. As a result of this effect, The Age of Bronze seems to be weightless here. Druet, encouraged by Rodin, adopted and attempted to master the process by producing a dozen or so variations, each one with a different degree of solarization.

In the 20th century, solarization would be used as a technique and a means of photographic expression by artists such as Man Ray,Edward Steichen and Maurice Tabard.

Steichen recorded the aging sculptor clothed in timeless drapery and sitting at the feet of the plaster model of his Eve, a soft-focus image that appears almost as the sculptor’s dream.

“Look how she stands, high on the steep facade
of the cathedral, near the window-rose,
simply, holding in her hand the apple,
judged for all time as the guiltless-guilty

for the growing fruit her body held
which she gave birth to after parting from
the circle of eternities. She left
to face the strange New Earth, so young in years.

Oh, how she would have loved to stay a little
longer in that enchanted garden, where
the peaceful gentle beasts grazed side by side.

But Adam was resolved to leave, to go
out into this New Earth, and facing death
she followed him. God she had hardly known.”

“It is impossible to contemplate the Salon walls without condoling with Mr. Steichen on the conflict between art and popular prudery. The camera can represent flesh so superbly that, if I dared, I would never photograph a figure without asking that figure to take it clothes off. I delight in mankind as nature makes it, and take such a moderate interest in mere garments that my tailor…has..had to change his name to avoid the public discredit of my callous abuse of his masterpieces….”

“Photography records the gamut of feelings written on the human face, the beauty of the earth and skies that man has inherited, and the wealth and confusion man has created. It is a major force in explaining man to man.”

“Every other artist begins with a blank canvas, a piece of paper… the photographer begins with the finished product.”

When Edward Steichen arrived in Paris in 1900, Auguste Rodin (1840-1917) was regarded not only as the finest living sculptor but also perhaps as the greatest artist of his time. Steichen visited him in his studio in Meudon in 1901 and Rodin, upon seeing the young photographer’s work, agreed to sit for his portrait. Steichen spent a year studying the sculptor among his works.

In his autobiography, Edward Steichen describes the studio as being so crowded with marble blocks and works in clay, plaster, and bronze that he could not fit them together with the sculptor into a single negative. He therefore made two exposures, one of Auguste Rodin and the Monument to Victor Hugo, and another of The Thinker. Steichen first printed each image separately and, having mastered the difficulties of combining the two negatives, joined them later into a single picture, printing the negative showing Rodin in reverse.

Rodin–The Thinker is a remarkable demonstration of Steichen’s control of the gum bichromate process and the painterly effects it encouraged. It is also the most ambitious effort of any Pictorialist to emulate art in the grand tradition. The photograph portrays the sculptor in symbiotic relation to his work. Suppressing the texture of the marble and bronze and thus emphasizing the presence of the sculptures as living entities, Steichen was able to assimilate the artist into the heroic world of his creations. Posed in relief against his work, Rodin seems to contemplate in The Thinker his own alter ego, while the luminous figure of Victor Hugo suggests poetic inspiration as the source of his creativity. Recalling his response to a reproduction of Rodin’s Balzac in a Milwaukee newspaper, Steichen noted: “It was not just a statue of a man; it was the very embodiment of a tribute to genius.” Filled with enthusiasm and youthful self-confidence, Steichen wanted in this photograph to pay similar tribute to Rodin’s genius. 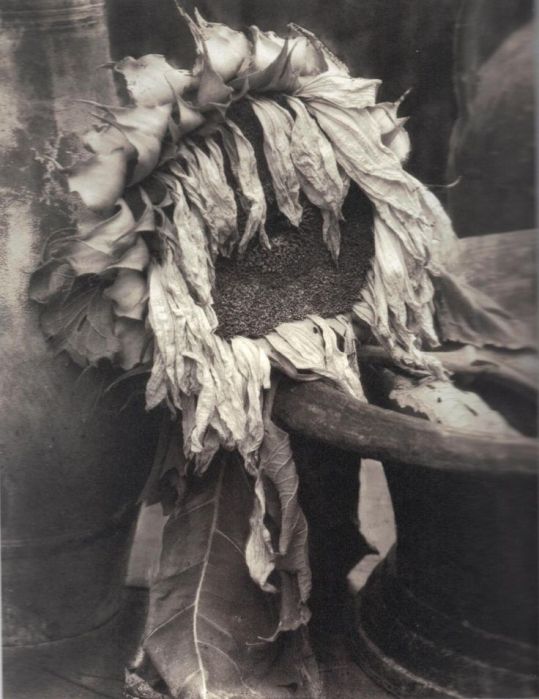 “When sunflowers fail
They do not fail
In the manner of wheat and corn;
For fields of grain wither to brown
And sunflower fields blacken instead.
The great green leaves fall away;
Each plant becomes a stick.
The yellow eyes that once
So proudly followed the sun
Are humbled;
They bow their heads in ebony.
Row upon row the sunflowers stand
Like candy canes awaiting Halloween”