This painting depicts  an odalisque, or concubine. Jean Auguste Dominique Ingres‘ contemporaries considered the work to signify his break from Neoclassicism, indicating a shift toward exotic Romanticism. 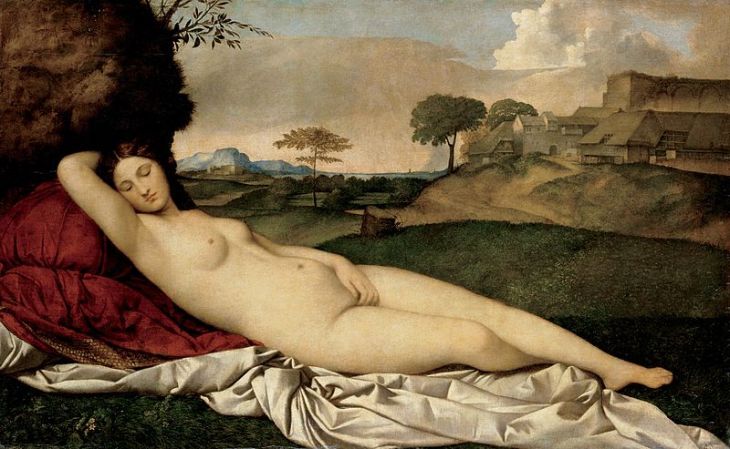 The painting was commissioned by Napoleon’s sister, Queen Caroline Murat of Naples, and finished in 1814. Ingres drew upon works such as Dresden Venus by Giorgione, and Titian’s Venus of Urbino as inspiration for his reclining nude figure, though the actual pose of a reclining figure looking back over her shoulder is directly drawn from the 1809 Portrait of Madame Récamier by Jacques-Louis David.

Ingres portrays a concubine in languid pose as seen from behind with distorted proportions. The small head, elongated limbs, and cool color scheme all reveal influences from Mannerists such as Parmigianino, whose Madonna with the Long Neck was also famous for anatomical distortion.

This eclectic mix of styles, combining classical form with Romantic themes, prompted harsh criticism when it was first shown in 1814. Critics viewed Ingres as a rebel against the contemporary style of form and content. When the painting was first shown in the Salon of 1819, one critic remarked that the work had “neither bones nor muscle, neither blood, nor life, nor relief, indeed nothing that constitutes imitation”. This echoed the general view that Ingres had disregarded anatomical realism. Ingres instead favored long lines to convey curvature and sensuality, as well as abundant, even light to tone down the volume. Ingres continued to be criticized for his work until the mid-1820s. 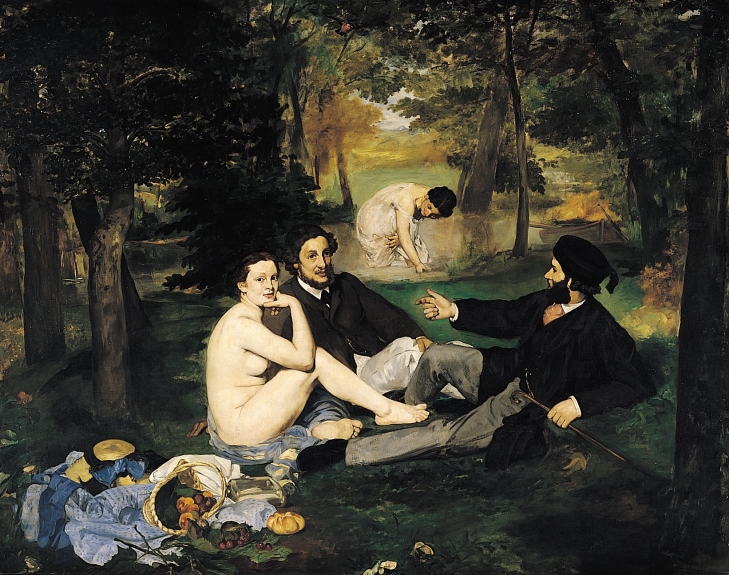 Le déjeuner sur l’herbe (The Luncheon on the Grass) – originally titled Le Bain (The Bath) – is a large oil on canvas painting by Édouard Manet created in 1862 and 1863. Rejected by the Salon jury of 1863, Manet seized the opportunity to exhibit this and two other paintings in the 1863 Salon des Refusés where the painting sparked public notoriety and controversy.

Odilon Redon, for example, did not like it. There is a discussion of it, from this point of view, in Marcel Proust‘s Remembrance of Things Past. One interpretation of the work is that it depicts the rampant prostitution that occurred in the Bois de Boulogne, a large park at the western outskirts of Paris, at the time. This prostitution was common knowledge in Paris, but was considered a taboo subject unsuitable for a painting.

It is not a realist painting in the social or political sense of Honoré Daumier, but it is a statement in favor of the artist’s individual freedom. The shock value of a nude woman casually lunching with two fully dressed men, which was an affront to the propriety of the time, was accentuated by the familiarity of the figures. Manet’s wife, Suzanne Leenhoff, and his favorite model, Victorine Meurent, both posed for the nude woman, who has Meurent’s face, but Leenhoff’s plumper body. Her body is starkly lit and she stares directly at the viewer. The two men are Manet’s brother Gustave Manet and his future brother-in-law, Ferdinand Leenhoff. They are dressed like young dandies. The men seem to be engaged in conversation, ignoring the woman. In front of them, the woman’s clothes, a basket of fruit, and a round loaf of bread are displayed, as in a still life. In the background a lightly clad woman bathes in a stream. Too large in comparison with the figures in the foreground, she seems to float above them. The roughly painted background lacks depth – giving the viewer the impression that the scene is not taking place outdoors, but in a studio. This impression is reinforced by the use of broad “photographic” light, which casts almost no shadows; the lighting of the scene, in fact, is inconsistent and unnatural. The man on the right wears a flat hat with a tassel, of a kind normally worn indoors. 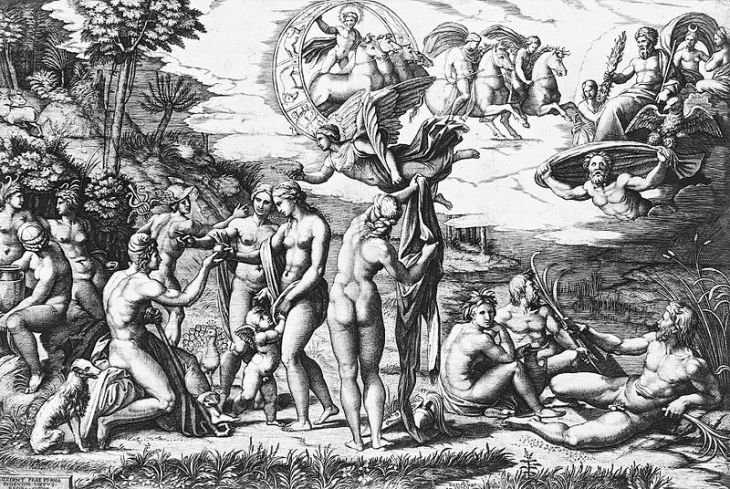 Judgement of Paris (circa 1515). Engraving by Marcantonio Raimondi to a design by Raphael

As with the later Olympia (1865), and other works, Manet’s composition reveals his study of the old masters, as the disposition of the main figures is derived from Marcantonio Raimondi‘s engraving The Judgement of Paris (c. 1515) after a drawing by Raphael.

Scholars also cite two works as important precedents for Manet’s painting Le déjeuner sur l’herbe, The Pastoral Concert, 1508, attributed to either one of the Italian Renaissance masters, Titian or Giorgione, and Giorgione’s The Tempest, both of which are famous Renaissance paintings.

The Pastoral Concert (c. 1509), attributed to either one of the Italian Renaissance masters, Titian or Giorgione

The subject was perhaps the allegory of poetry and music: the two women would be an imaginary apparition representing the ideal beauty, stemming from the two men’s fantasy and inspiration. The woman with the glass vase would be the muse of tragic poetry, while the other one would be that of the pastoral poetry. Of the two playing men, the one with the lute would represent the exalted lyric poetry, the other being an ordinary lyricist, according to the distinction made by Aristotle in his Poetics. Another interpretation suggests that the painting is an evocation of the four elements of the natural world (water, fire, earth and air) and their harmonic relationship. 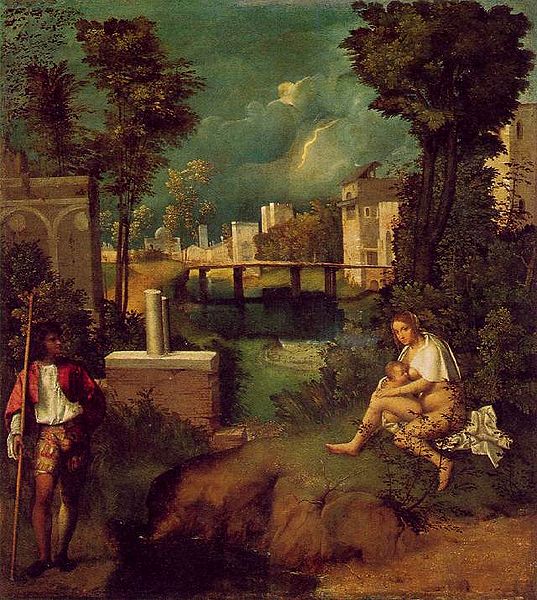 There is no contemporary textual explanation for The Tempest, and ultimately, no definitive reading or interpretation. To some it represents the flight into Egypt; to others, a scene from classical mythology (Paris and Oenone) or from an ancient Greek pastoral novel. According to the Italian scholar Salvatore Settis, the desert city would represent the Paradise, the two characters being Adam and Eve with their son Cain: the lightning, as in ancient Greek and Hebrew times, would represent God who has just ousted them from Eden. Others have proposed a moral allegorical reading, or concluded that Giorgione had no particular subject in mind.