“I was born in a pool, they made my mother stand
And I spat on that surgeon and his trembling hand
When I felt the light I was worse than bored
I stole the doctor’s scalpel and I slit the cord

They starved me for weeks, they thought they’d teach me fear
I fed on cellmates’ dreams, it gave me fine ideas
When they cut me loose, the time had served me well
I made allies in heaven, I made comrades in Hell

I watched the sweetest psalm stolen by the choir
I dreamed of martyrs’ bones hanging from a wire
I make a contribution, I get absolution
I make a resolution to purify my soul

They can’t touch me now
I got every sacrament behind me:
I got baptism,
I got communion,
I got penance,
I got extreme unction
I’ve got confirmation
‘Cause I’m a Catholic child
The blood ran red
The blood ran wild!

Now I’m a Catholic man
I put my tongue to the rail whenever I can.”

Carroll was born to a working-class family of Irish descent, and grew up on New York City’s Lower East Side. When he was about 11 (in the sixth grade) his family moved north to Inwood in Upper Manhattan where he attended Good Shepherd School. He was taught by the LaSalle Christian Brothers, and his brother in the sixth grade noted that he could write and encouraged him to do so. In fall 1963, he entered public school, but was soon awarded a scholarship to the elite Trinity School. He attended Trinity from 1964–1968. 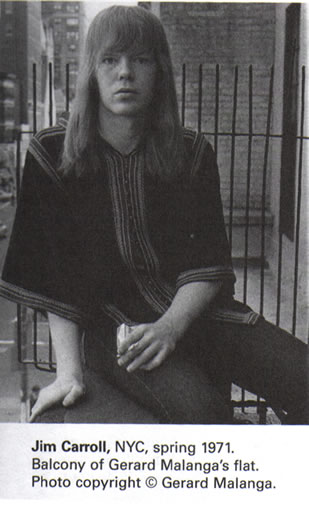 While still in high school, Carroll published his first collection of poems, Organic Trains. Already attracting the attention of the local literati, his work began appearing in the Poetry Project’s magazine The World in 1967. Soon his work was being published in elite literary magazines like Paris Review in 1968, and Poetry the following year. In 1970, his second collection of poems, 4 Ups and 1 Down was published, and he started working for Andy Warhol. At first, he was writing film dialogue and inventing character names; later on, Carroll worked as the co-manager of Warhol’s Theater. Carroll’s first publication by a mainstream publisher (Grossman Publishers), the poetry collection Living at the Movies, was published in 1973.

In 1978, after he moved to California to get a fresh start since overcoming his heroin addiction, Carroll formed The Jim Carroll Band, a new wave/punk rock group, with encouragement from Patti Smith, with whom he once shared an apartment in New York City, along with Robert Mapplethorpe. He performed a spoken word piece with the Patti Smith Group in San Diego when the support band dropped out at the last moment. 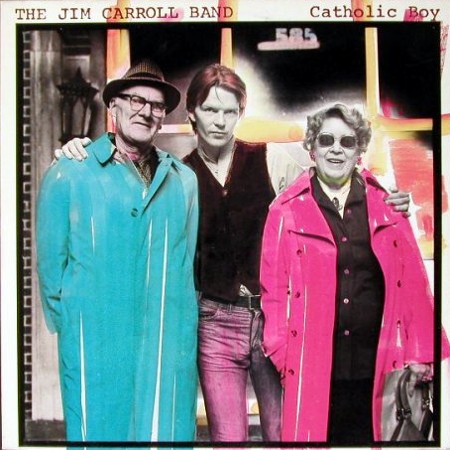 The front cover photograph was taken by Annie Leibovitz

The band was originally called Amsterdam, where they originally formed and were based in Bolinas, California. The musicians were Steve Linsley (bass), Wayne Woods (drums), Brian Linsley and Terrell Winn (guitars). They released a single People Who Died, from their 1980 debut album, Catholic Boy. The album featured contributions from Allen Lanier and Bobby Keys.

In 1982 the song appeared in E.T. the Extra-Terrestrial (Steven Spielberg, 1982), from which Carroll received royalties until his death in 2009. The song also appeared in the 1985 Kim Richards vehicle Tuff Turf starring James Spader and Robert Downey Jr., which also featured a cameo appearance by the band, as well as 2004’s Dawn of the Dead. It was featured in the 1995 film The Basketball Diaries (based on Jim Carroll’s autobiography), and was covered by John Cale on his Antártida soundtrack. A condensed, 2-minute, version of the song was made into an animated music video by Daniel D. Cooper, an independent filmmaker/animator, in 2010. The song’s title was based on a poem by Ted Berrigan.

To watch a clip related to this post, please take a gander at The Genealogy of Style’s Facebook page: https://www.facebook.com/pages/The-Genealogy-of-Style/597542157001228

We are constantly looking at still and video images through compressed formats, on smaller screens, on shrinking devices. I invert the approach to current media, by enlarging the minuscule detail of compressed imagery to a point of beautiful abstract distortion.

By breaking the image elements into enlarged color tiles, I strive to create two levels of viewing. I experiment pulling the eye of the viewer back and forth between the sterile smoothness of tiles and the composed depth of a lit portrait. It is a mediation of human emotion and experience contained from the perspective of the digital age. My subjects, who are poets – parse the human experience into measures of words, sounds, images.

The portraits are large in scale, evoking sacred items to be viewed with a sense of awe and wonder. One thinks of stained glass windows in cathedrals; upon close examination, the exquisite tiles break the image into astounding squares of colored glass. The abstract color tiles invite the viewer to explore the surface texture of the image. When you take a step back, the image becomes whole, the work illuminated, shining light on the subjects – poetry itself.

I make a statement on the nature of a poet – we can see these faces at a distance, but tiles prevent us from recognizing the subjects at a closer range. the sum of their work and voices touches us, but they are, as all people are, ultimately unknowable. 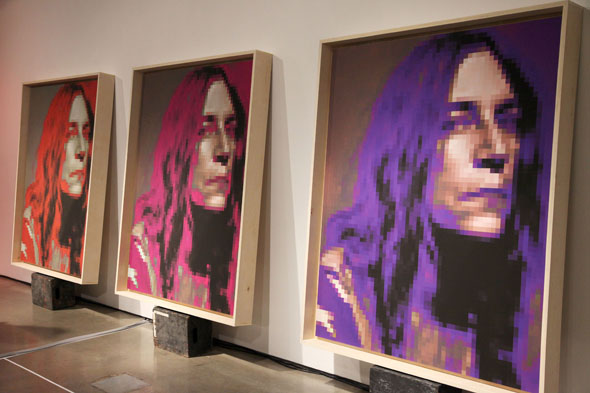 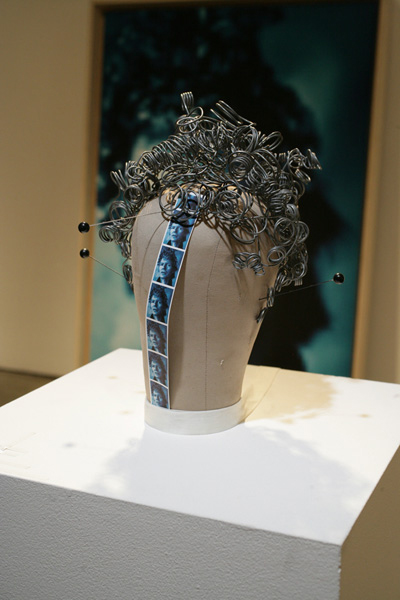 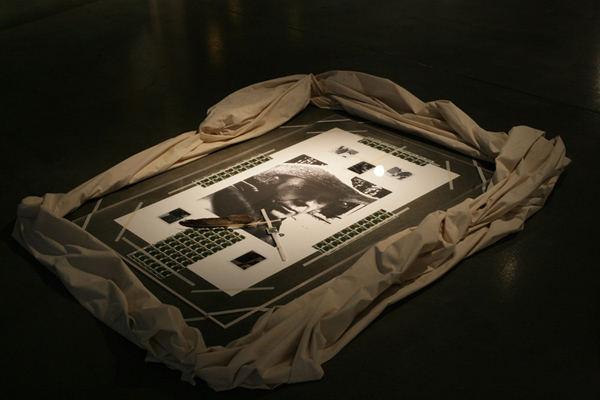 It was in 1995 when the photographer Steven Sebring met Patti Smith while on a shoot for Spin Magazine. Many years later they collaborated on a film Patti Smith: Dream of Life, a book, and an exhibition. And they collaborated again. to celebrate the opening of Sebring’s exhibition Illumination: Who Are Poets at the Milk Gallery in Chelsea (2011).

The exhibit featured a series of portraits Sebring did of Patti, Jim Carroll, Joey Ramone, Michael Stipe, Neil Young, Philip Glass and Richard Hell. To honor the subjects, Patti and Stipe sang and played. Patti shared with the public few lectures stories and songs about all of them. Her passion and devotion to poetry made her the perfect voice for a special New York night. She shared the stage with her long time guitarist Lenny Kaye and her daughter Jesse (magic on piano). 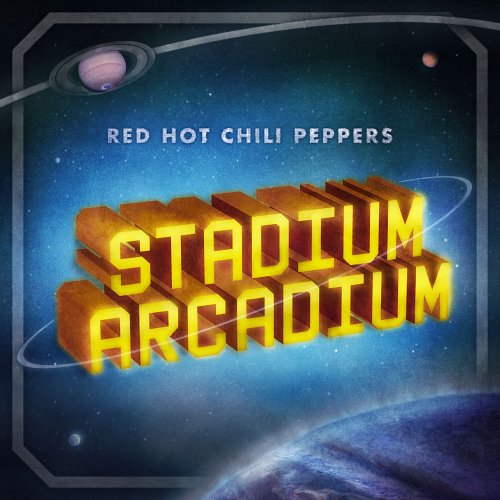 Storm Thorgerson was asked to design Red Hot Chili Pepper’s Stadium Arcadium cover. Thorgerson provided at least three possible covers for the album, however, his ideas were ultimately rejected and a simple cover featuring yellow “Superman” lettering and a blue background with planets was utilized instead. Thorgerson publicly denounced the chosen artwork, stating:

What lay behind the cover behaviour of Red Hot Chilli Peppers was beyond mathematics, certainly beyond our understanding. For the Stadium Arcadium cover they elected to feature the title in ‘superman’ lettering which was already old fashioned in itself, plus some “planetary embroidery” and that was it! It was trite, dull and derivative completely unlike the music, which was colourful, eclectic, imaginative, positive, and endlessly inventive. I am not often inclined to publicly criticise the work of others for I see little purchase in it, but there is, in this instance a vested interest, for the Peppers turned down our offerings in favour of this piece of unadventurous graphics. How could they? And here are three of our suggestions for your curiosity, and for my petulance.

To watch the music video for Dani California, please take a gander at The Genealogy of Style‘s Facebook page: https://www.facebook.com/pages/The-Genealogy-of-Style/597542157001228?ref=hl