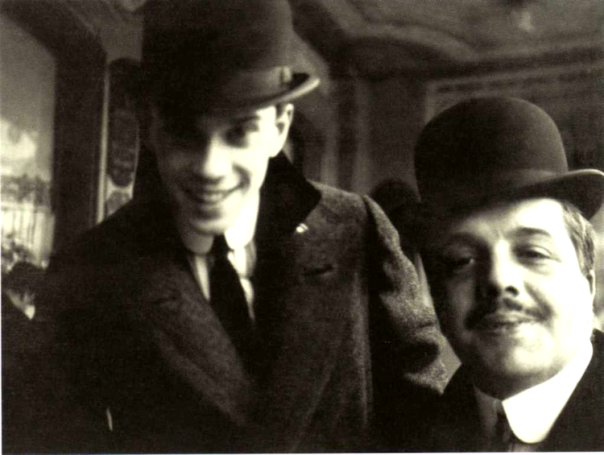 “…The windiest militant trash
Important Persons shout
Is not so crude as our wish:
What mad Nijinsky wrote
About Diaghilev
Is true of the normal heart;
For the error bred in the bone
Of each woman and each man
Craves what it cannot have, Not universal love
But to be loved alone.”

The poem was written in 1939, just as German troops invaded Poland and began the Second World War. It was published in The New Republic that year and included in the collection Another Time the following year.

Auden came to dislike this work, finding it “dishonest” and a “forgery.” He had his publisher include a note that the work was “trash he was ashamed to have written”; he also tried to keep it out of later collections of his poems. It is unclear why he felt so embarrassed by the poem.

In January, 1919, Vaslav Nijinsky began scribbling in a notebook. Seven weeks later, Swiss doctors studied four notebooks full of his writings and promptly interned him in a sanitarium for the mentally ill. He was only 29 at the time; he was schizophrenic; and while his fame as the greatest dancer of his time never faded, he lived the last 31 years of his life in seclusion and incoherence. For the next 30 years, Nijinsky was in and out of psychiatric hospitals and asylums. During 1945 after the end of the war, after Romola had moved with him to Vienna, he encountered a group of Russian soldiers in an encampment, playing traditional folk tunes on a balalaika and other instruments. Inspired by the music and hearing his first language, he started dancing, astounding the men with his skills. Drinking and laughing with them helped him start to speak again. He had maintained long periods of almost absolute silence during his years of illness.

His 1919 notebooks contained his final words addressed to the world. These notebooks were his diary. They were published in 1936; however, more than half of the diary was omitted. In 1999, The Diary of Vaslav Nijinsky: Unexpurgated Edition, by Vaslav Nijinsky, Joan R. Acocella (Ed.), Kyril FitzLyon (Trans.) was published in English by Farrar, Straus and Giroux.

Below are a few quotes from the diary relating to Serge Diaghilev, the Russian impresario who took the 19-year-old Nijinsky as a lover and made him the star of his Ballets Russes. Five years later, when Nijinsky left to marry Romola de Pulszki, Diaghilev threw him out of his dance company and tried to destroy his career.

“I loved him sincerely and, when he told me that the love of women was a terrible thing, I believed him.”

“Diaghilev dyes his hair so as not to be old. Diaghilev’s hair is gray. Diaghilev buys black hair creams and rubs them in. I noticed this cream on Diaghilev’s pillows, which have black pillowcases. I do not like dirty pillowcases and therefore felt disgusted when I saw them.”

“Diaghilev has two false front teeth. I noticed this because when he is nervous he touches them with his tongue. They move, and I can see them. Diaghilev reminds me of a wicked old woman when he moves his two front teeth…”

“Diaghilev liked to be talked about and therefore wore a monocle in one eye. I asked him why he wore a monocle, for I noticed that he saw well without a monocle. Then Diaghilev told me that one of his eyes saw badly. I realized then that Diaghilev had told me a lie. I felt deeply hurt…”

“I began to hate him [Diaghilev] quite openly, and once I pushed him on a street in Paris. I pushed him because I wanted to show him that I was not afraid of him. Diaghilev hit me with his cane because I wanted to leave him. He felt that I wanted to go away, and therefore he ran after me. I half ran, half walked. I was afraid of being noticed. I noticed that people were looking. I felt a pain in my leg and pushed Diaghilev. I pushed him only slightly because I felt not anger against Diaghilev but tears. I wept. Diaghilev scolded me. Diaghilev was gnashing his teeth, and I felt sad and dejected. I could no longer control myself and began to walk slowly. Diaghilev too began to walk slowly. We both walked slowly. I do not remember where we were going. I was walking. He was walking. We went, and we arrived. We lived together for a long time…”

“Open your closed eyelid
Which is gently brushed by a virginal dream!
I am the ghost of the rose
That you wore last night at the ball.
You took me when I was still sprinkled with pearls
Of silvery tears from the watering-can,
And, among the sparkling festivities,
You carried me the entire night.

O you, who caused my death:
Without the power to chase it away,
You will be visited every night by my ghost,
Which will dance at your bedside.
But fear nothing; I demand
Neither Mass nor De Profundis;
This mild perfume is my soul,
And I’ve come from Paradise.

My destiny is worthy of envy;
And to have a fate so fine,
More than one would give his life
For on your breast I have my tomb,
And on the alabaster where I rest,
A poet with a kiss
Wrote: “Here lies a rose,
Of which all kings may be jealous.” 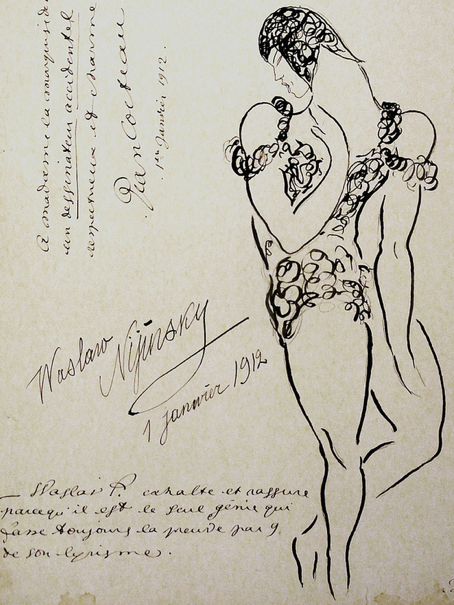 Illustrations by Jean Cocteau, 1912.Le Spectre de la rose is a short ballet about a young girl who dreams of dancing with the spirit of a souvenir rose from her first ball.

In 1911, Ballet Russes producer Sergei Diaghilev hoped to present Vaslav Nijinsky‘s ballet L’Après-midi d’un faune. It was not ready for the stage, so he needed another ballet to take its place. That ballet was the idea of writer Jean-Louis Vaudoyer. In 1910, he had sent an idea for a ballet to Ballets Russes set and costume designer Léon Bakst. His idea was based on Le Spectre de la rose, a verse by Théophile Gautier, and Afforderung zum Tanz (Invitation to the Dance), a work for piano by Carl Maria von Weber. Diaghilev liked Vaudoyer’s idea. He thought it could easily take the place of Faune. He put Vaudoyer’s idea into development at once. Diaghilev liked the idea of a ballet based on Gautier’s Spectre because it could be tied to the centennial of Gautier’s birth. Michel Fokine choreographed the ballet to the music of Carl Maria von Weber’s piano piece as orchestrated by Hector Berlioz in 1841. The little ballet became one of the most loved productions of the Ballets Russes. 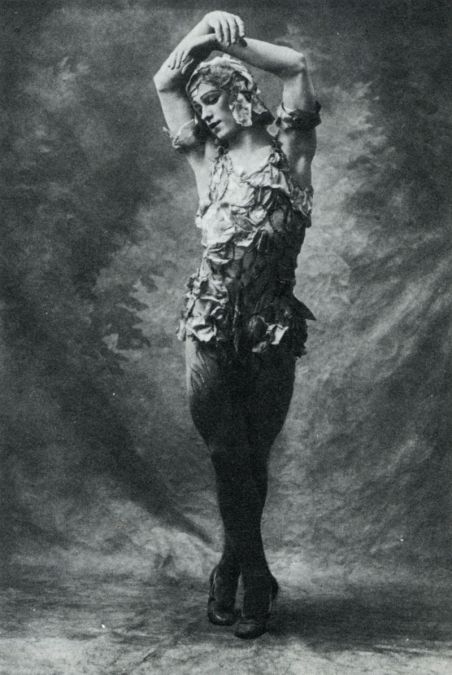 Nijinsky’s silk elastic costume was covered with silk rose petals. Nijinsky was stitched into the costume for every show. After every show, the wardrobe mistress would touch up the petals with her curling iron.

Nijinsky’s make-up was an important part of the costume design. Romula de Pulszky, later to be his wife, wrote that he looked like “a celestial insect, his eyebrows suggesting some beautiful beetle”. Peter Ostwald writes that Nijinsky’s costume was like a ballerina’s.

Sometimes, petals would become loose and fall to the stage floor. Nijinsky’s servant Vasili would collect the petals and sell them as souvenirs. It was said that he built a large house called Le Château du Spectre de la Rose with the profits from the sale of the petals.

The ballet was first presented in Monte Carlo on 19 April 1911. Nijinsky danced The Rose and Tamara Karsavina danced The Young Girl. It was a great success. Spectre became internationally famous for the spectacular leap Nijinsky made through a window at the ballet’s end.

Many dancers have attempted to match Nijinsky as The Rose, but have failed. After all, the ballet had been designed for Nijinsky’s very special talents.

It was one of the first ballets Rudolph Nureyev danced in the West after leaving Russia. This was for German television in 1961. He first danced The Rose on stage (24 times) in New York City for the Joffrey Ballet’s Diaghilev program in 1979. Spectre de la Rose was the last ballet Nureyev and Margot Fonteyn danced together. That was in June 1979, when the ballerina was 60. He danced The Rose in Paris in 1981 and 1982, and last danced the part in August 1987 at the London Coliseum with the Nancy Ballet.