Take a Bow is a midtempo pop ballad with a “Sukiyaki”-like Japanese touch, performed by American singer-songwriter Madonna. It was released as the Bedtime Stories‘ second single on October 28, 1994. The song also appears on her compilation albums Something to Remember (1995), GHV2 (2001) and Celebration (2009).

Following the release Madonna’s first book publication, Sex, the erotic thriller, Body of Evidence, and the album, Erotica, in the early 1990s, the media and public’s backlash against Madonna’s overtly sexual image was at a peak. Released in early March, 1994, her first musical release after Erotica was the tender ballad I’ll Remember from the soundtrack of the film With Honors. When Madonna appeared on the Late Show with David Letterman on March 31, 1994 to promote the single, her coarse language and behavior—which was provocative, seemingly random at times, full of double entendres (at one point asking Letterman to sniff her panties), profanities, and ended with a refusal to leave the set—caused yet another large public controversy. Following this, Madonna decided to tone down her image and move her career into a new direction. Musically, she explored new-jack R&B styles with a generally mainstream, radio-friendly sound. This new R&B sound was reflected in Bedtime Stories. For Take a Bow, Madonna wanted a more “romantic vein” so she worked with Babyface on the track because he had proved himself to be very successful in his previous works with smooth R&B, working with other artists such as Whitney Houston, Boyz II Men, and Toni Braxton.

The chorus expresses the theme of saying goodbye to a lover who had taken her for granted. The title plays upon the verse in the song “all the world is a stage and everyone has their part,” a reference to the line by William Shakespeare in his play As You Like It, “All the world’s a stage, and all the men and women mere players”. In his book Madonna: An Intimate Biography, J. Randy Taraborrelli describes the song as a “somber, sarcastic, all-the-world’s-a-stage song about unrequited love… [about a subject] whose phoniness might have fooled everyone else, but not her.” He goes on to say that in the song Madonna tells the subject of her unrequited love to take a bow for “rendering a great, transparent performance in life and love.”

The music video for Take a Bow was directed by Michael Haussman, and is a lavish period-style piece filmed from November 3–8, 1994 in Ronda and in the bullring of Antequera, Spain. It was outfitted by famed stylist Lori Goldstein who received the VH1 Fashion and Media award for best styling. The plot, set in the 1940s, depicts Madonna as a neglected lover of a bullfighter, played by real-life Spanish bullfighter Emilio Muñoz. Madonna’s character yearns for the bullfighter’s presence, with erotic heartbreak. A total of three different bulls were used during the production of the music video. It generated controversy with animal rights activists who accused the singer of glorifying bullfighting. 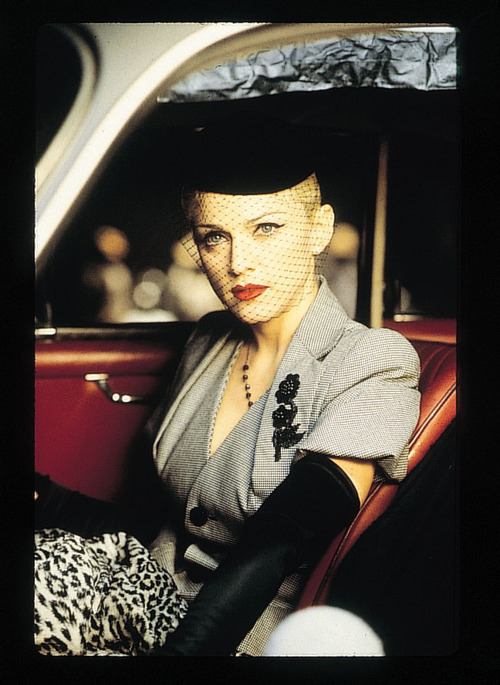 In the video Madonna wears fitted, classic suits by British fashion designer John Galliano. In an interview with MTV’s Kurt Loder on the set of the music video, Madonna said that when she was initially writing Take a Bow the inspiration for the song was an actor, but she wanted the male character in the video to be to be a matador instead because she wanted the video to be about an “obsessive, tragic love story that doesn’t work out in the end” and a matador would be more visually effective in expressing the emotion of the song. The style of the music video has been compared to Spanish director Pedro Almodóvar‘s 1986 film Matador, starring Antonio Banderas.  The music video for Madonna’s 1995 single You’ll See is considered a follow up to the Take a Bow music video, as Madonna and Emilio Muñoz reprise their roles. In that video Madonna’s character walks out on Munoz’s (bullfighter) character, leaving him behind in despair. Madonna’s character is then seen on the train and later on a plane, while Munoz’s character tries to catch up with her in vain.

Madonna requested that Haussman give the video a Spanish theme because, at the time, she was lobbying for the role of Eva Perón in the film version of Evita. She subsequently sent a copy of the video to director Alan Parker as a way of “auditioning” for the role. Madonna eventually won the role of Perón.

The music video for Take a Bow inspired Justin Timberlake‘s video for SexyBack (Michael Haussman, 2006) and was later tributed by Britney Spears‘ video for “Radar” (Dave Meyers, 2009). Madonna won Best Female Video honors at the 1995 MTV Video Music Awards for the Take a Bow music video. It was also nominated for Best Art Direction in a Video, but lost to Michael Jackson and Janet Jackson‘s Scream.

To watch Take a Bow music video, please take a gander at The Genealogy of Style’s Facebook page: https://www.facebook.com/pages/The-Genealogy-of-Style/597542157001228?ref=hlt 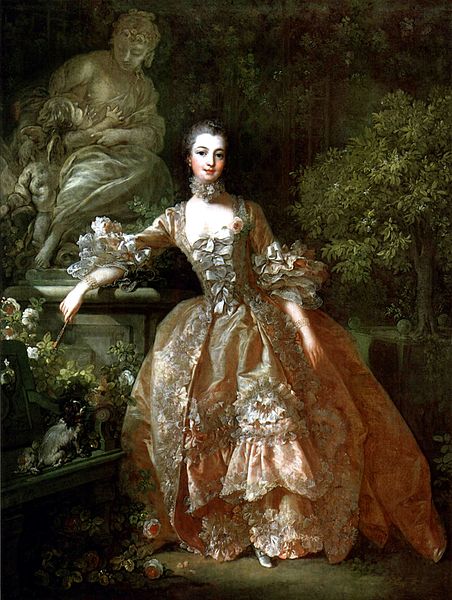 Pompadour refers to a hairstyle which is named for Madame de Pompadour (1721-1764), mistress of King Louis XV. Although there are numerous variations of the style for both women and men, the basic concept is hair swept upwards from the face and worn high over the forehead, and sometimes upswept around the sides and back as well.

After its initial popularity among fashionable women in the 18th century, the style was revived as part of the Gibson Girl look in the 1890s and continued to be in vogue until World War I. The style was in vogue for women once again in the 1940s. Variations of the pompadour style continue to be worn by men and women in the 21st century.

“The Weaker Sex: The young man imagines himself the latest victim of some fair entomologist“, Charles Dana Gibson, 1903

Among women, the hairstyle has become marginally popular again in the first few years of this century. It can be created by ratting at the roots of the hair on the sides of the pompadour towards the top of the head. Then the hair is combed up and over the ratted hair, off the forehead, the front up in a curl straight back, and the sides pulled back towards the center.

Pompadour style quickly became a stereotypical feature of rebels and nonconformists, and gained popularity especially after the rise of rock ‘n roll legend Elvis Presley, who sported the same look. In recent years the pompadour hair style has been adopted by those enamoured with vintage culture of the late 1950s and early 1960s that includes antique cars, hot rods, American folk music, rockabilly bands, Little Richard, and Elvis , as well as actors such as James Dean and Desi Arnaz.

Nowadays, the pompadour hairstyle is worn on celebrities which include Justin Bieber, Bruno Mars, Macklemore, David Beckham, Zac Efron, Zayn Malik of One Direction, Alex Turner of Arctic Monkeys, Justin Timberlake and many others.