Livin’ on the Edge, written by Steven Tyler, Joe Perry and Mark Hudson, was released in 1993 as the first single from the band’s commercially successful Aerosmith‘s album Get a Grip. According to the band’s autobiography Walk This Way,this single was inspired by the Los Angeles riots of 1992.

The song is one of Aerosmith’s most successful attempts at tackling social issues. It reflects on the sorry state of the world (“There’s something wrong with the world today”), religion (“We’re seeing things in a different way and God knows it ain’t his”), racism (“If you can judge a wise man by the color of his skin”), among other things. However, the lyrics in the song also suggest that the world is still worth living in (“We could tell ’em no, or we could let it go, but I would rather be a-hangin’ on”). The lyrics also contain a reference to the Yardbirds song, Mister You’re a Better Man Than I (Aerosmith had previously recorded a version of a song popularized by the Yardbirds, “Train Kept A-Rollin’“).

The music video for Livin’ on the Edge is notable for a number of things, including depicting vandalism, theft (notably grand theft auto), joyriding, airbag crashing, unprotected sex, and violence among school-aged youth, cross-dressing teachers, a naked Steven Tyler holding a zipper by his crotch with half his body painted black (to give the effect he pulled down a zipper, unzipping his body) and lead guitarist Joe Perry playing a lead guitar solo in front of an oncoming train. Directed by Marty Callner, the video was praised for its groundbreaking theatrical scenes and special effects. The video featured acting by Edward Furlong.

After seeing her in The Crush (Alan Shapiro, 1993), Marty Callner decided Alicia Silverstone would be perfect for a role in a music video he was directing for the band Aerosmith, called Cryin’; she was subsequently cast in two more videos, Amazing and Crazy. These were hugely successful for both the band and Silverstone, making her a household name (and also gaining her the nickname, “the Aerosmith chick”). After seeing Silverstone in the three videos, filmmaker Amy Heckerling decided to cast her inClueless

This music video features the first appearance of Alicia Silverstone in the band’s videos, as well as the band performing in the Central Congregational Church in Fall River, Massachusetts. The song flashes back and forth between the band and Alicia Silverstone, who plays a teen who has a falling out with her boyfriend (played by Stephen Dorff) after catching him cheating. She feigns an attempt to kiss him, but instead leans away annoying him. She then punches him and shoves him out of the car leaving him in the dust. She begins a phase of rebellion and individuality and gets a navel piercing, which has largely been credited as introducing navel piercing to mainstream culture. After having her purse stolen by another young man (played by then-unknown Josh Holloway of Lost), she chases him down and knocks him to the ground. The video then cuts to her standing on the edge of an overpass bridge, contemplating jumping…

This was the second appearance of Alicia Silverstone in the band’s videos. Paired with her was Jason London, star of Dazed and Confused(Richard Linklater, 1993), a film which was released in the same year as Get a Grip and which memorably made numerous references to Aerosmith. The characters are featured in the music video as two cyberspace kids who escape to a world of virtual reality together, both not realizing the other is also doing virtual reality. The head-mounted display in the video worn by Jason London was manufactured by Liquid Image Corporation. The founders of Liquid Image Corporation, David Collette and Tony Havelka, were contacted by the video production crew and asked to provide a head-mounted display system for the VR sequence. 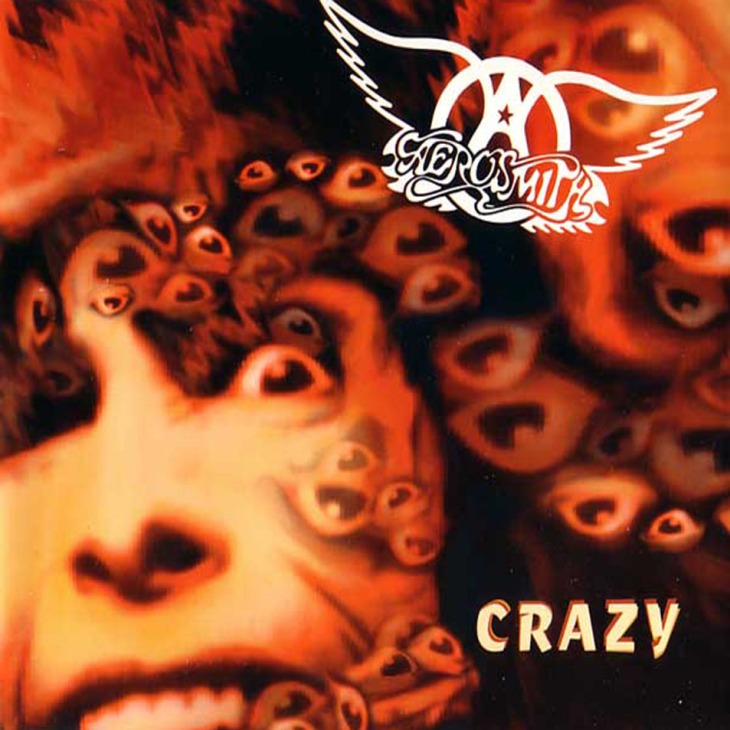 It featured the third appearance of Alicia Silverstone in the band’s videos, as well as the career debut of Steven’s then-teenaged daughter Liv Tyler. The decision to cast Liv in the video for Crazy was based on the video’s creators having seen her in a Pantene commercial, with absolutely no knowledge her father was in the band. The video was very film-like and depicted the two as schoolgirls who skip class and run away, driving off in a blue Ford Mustang convertible. The two use their good looks to take advantage of a service station clerk, and needing money, enter an amateur pole-dancing competition. The video is noteworthy for its very risque and suggestive sexual scenes, some of which seem to suggest lesbianism in the characters.