“The outside influences are always pouring in upon us, and we are always obeying their orders and accepting their verdicts. The Smiths like the new play; the Joneses go to see it, and they copy the Smith verdict.”

I was down at the New Amsterdam

Staring at this yellow-haired girl

Mr Jones strikes up a conversation

With a black-haired flamenco dancer

You know, she dances while his father plays guitar

We all want something beautiful

Man, I wish I was beautiful

So come dance the silence down through the morning

Show me some of that Spanish dancin’

Pass me a bottle, Mr Jones

Help me believe in anything

‘Cause I want to be someone who believes

Tell each other fairy tales

And we stare at the beautiful women

She’s looking at you

Smilin’ in the bright lights

Coming through in stereo

When everybody loves you

You can never be lonely

Paint myself in blue and red and black and gray

All of the beautiful colors are very, very meaningful

Yeah, well, you know gray is my favorite color

I felt so symbolic yesterday

If I knew Picasso

I would buy myself a gray guitar and play

Look into the future

Yeah, we stare at the beautiful women

She’s looking at you

I don’t think so

She’s looking at me

Standing in the spotlight

I bought myself a gray guitar

When everybody loves me

I will never be lonely

I will never be lonely

I wanna be a lion

Yeah, everybody wants to pass as cats

We all wanna be big, big stars

Yeah, but we got different reasons for that

‘Cause I don’t believe in anything

Stumbling through the Barrio

Yeah, we stare at the beautiful women

She’s perfect for you

Man, there’s got to be somebody for me

I wanna be Bob Dylan

Mr Jones wishes he was someone just a little more funky

When everybody love you

Oh! Son, that’s just about as funky as you can be

Starin’ at the video

When I look at the television, I wanna see me

Staring right back at me

We all wanna be big stars

But when everybody loves me

Mr. Jones is a song by American alternative rock band Counting Crows. It was released in December 1993 as the lead single and third track from their debut album, August and Everything After (1993). It was the band’s first radio hit and one of their most popular singles.

The album cover depicts handwritten lyrics to a song called August and Everything After, but the band decided against featuring the song on the album of the same name; it was not until over a decade later that it was played as part of one of their live concerts.

The band’s debut album August and Everything After was produced by American musician, songwriter, and soundtrack and record producer T-Bone Burnett. Joseph Henry “T Bone” Burnett was a touring guitarist in Bob Dylan‘s band on the Rolling Thunder Revue. And he also produced the second album by The Wallflowers, Bringing Down the Horse, released in 1996. August and Everything After became the fastest-selling album since Nirvana‘s Nevermind.

According to Adam Duritz, the song title had a hand in the naming by Jonathan Pontell of Generation Jones, the group of people born between 1954 and 1965. “I feel honored that my song Mr. Jones was part of the inspiration for the name Generation Jones. The name Generation Jones has several connotations, including a large anonymous generation, a “keeping up with the Joneses” competitiveness and the slang word “jones” or “jonesing”, meaning a yearning or craving

Some believe the song is a veiled reference to the protagonist of Bob Dylan’s Ballad of a Thin Man, based on the lyric “I wanna be Bob Dylan, Mr. Jones wishes he was someone just a little more funky.” According to Adam Duritz on VH1 Story Tellers “It’s really a song about my friend Marty and I. We went out one night to watch his dad play, his dad was a Flamenco guitar player who lived in Spain (David Serva), and he was in San Francisco in the mission playing with his old Flamenco troupe. And after the gig we all went to this bar called the New Amsterdam in San Francisco on Columbus.”

In a 2013 interview, Duritz explained that the song is named for his friend Marty Jones, but that is about Duritz himself. “I wrote a song about me, I just happened to be out with him that night,” Duritz said. The inspiration for the song came as Duritz and Jones were d runk at a bar after watching Jones’ father perform, when they saw Kenney Dale Johnson, longtime drummer for the musician Chris Isaak, sitting with three women. “It just seemed like, you know, we couldn’t even manage to talk to girls, … we were just thinking if we were rock stars, it’d be easier. I went home and wrote the song,” Duritz said. He sang the song in fun, enjoying the fantasy of making it big. However, he did not realize that just months later, in December 1993, MTV would begin playing the video for the song. It was an unexpected hit song, drawing massive radio play and launching the band into stardom.

To listen to this song and watch the music video, please take a gander at The Genealogy of Style‘s Facebook page: https://www.facebook.com/pages/The-Genealogy-of-Style/597542157001228

Buster Brown (left), his dog Tige and Mary Jane. Tige is thought to be the first talking pet to appear in American comics, and like that of many of his successors, his speech goes unnoticed by adults.

Buster Brown was created by Richard Felton Outcault in 1902. Two years later, Outcault traveled to the St. Louis World’s Fair in 1904, and canvassed up to 200 companies to use the Buster Brown character to advertise their products in William Randolph Hearst‘s New York Journal Sunday comic strips. So began the product placement for Brown Shoe Company. 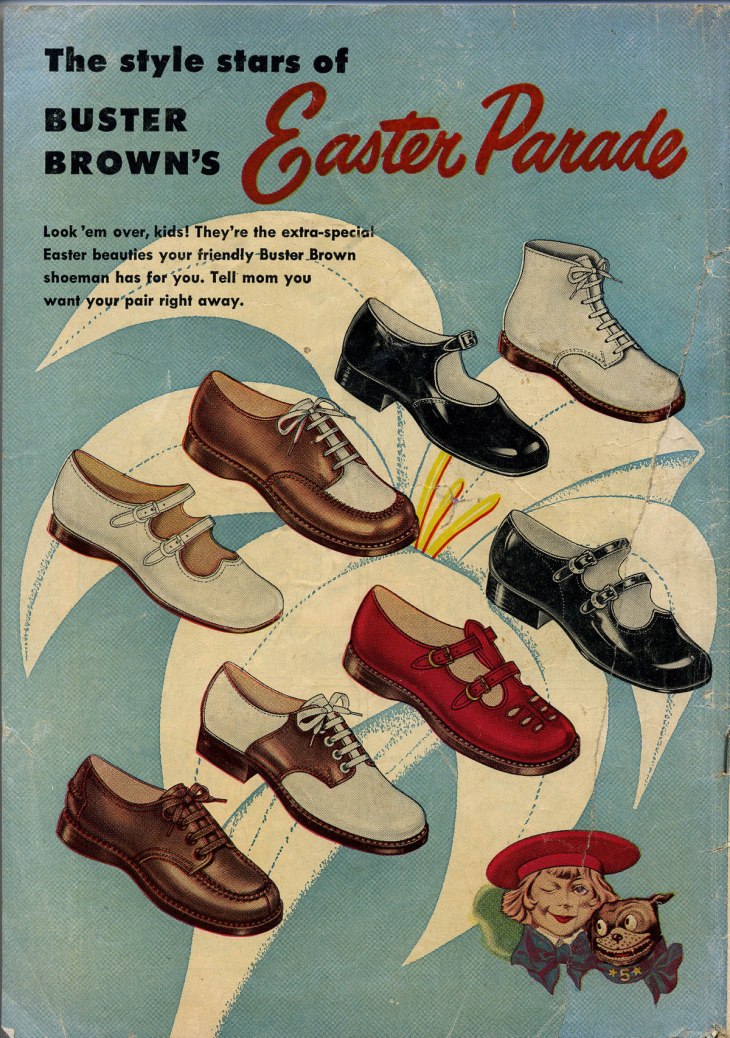 Brown Shoes vintage advertisement featuring some Mary Jane models with one or more straps across the instep.

Although generally associated with young girls, nowadays, and to a lesser extent teenage girls and women, Mary Janes have also been worn by males throughout history. Portrait of Henry VIII with Charles Quint and Pope Leon X, circa 1520 (Anonymous painter)

Some boys still in the first half of the 20th century wore Mary Jane for children, mainly in elite or high-profile families. President John Fitzgerald Kennedy and his son, October 1963

Buster Brown (named directly or indirectly after Buster Keaton, then a child actor in vaudeville) is a mischievous, rich, city-dwelling boy, who dressed in the style of Little Lord Fauntleroy. He is disturbingly pretty, but his actions belie his looks. He is a practical joker who might dress in a girl’s outfit and have her wear his clothes, break a window with his slingshot, or play a prank on a neighbor. The trick or transgression is discovered and he is punished, usually by being spanked by his mother, but it is unclear if he ever repents. Many strips end with Buster delivering a self-justifying moral which has little or nothing to do with his crime.

This mischievous young boy was loosely based on a boy near Outcault’s home in Flushing, New York. His physical appearance, including the pageboy haircut, was utilized by Outcault and later adopted by Buster Brown. The actual boy’s name was Granville Hamilton Fisher, son of Charles and Anna Fisher of Flushing. 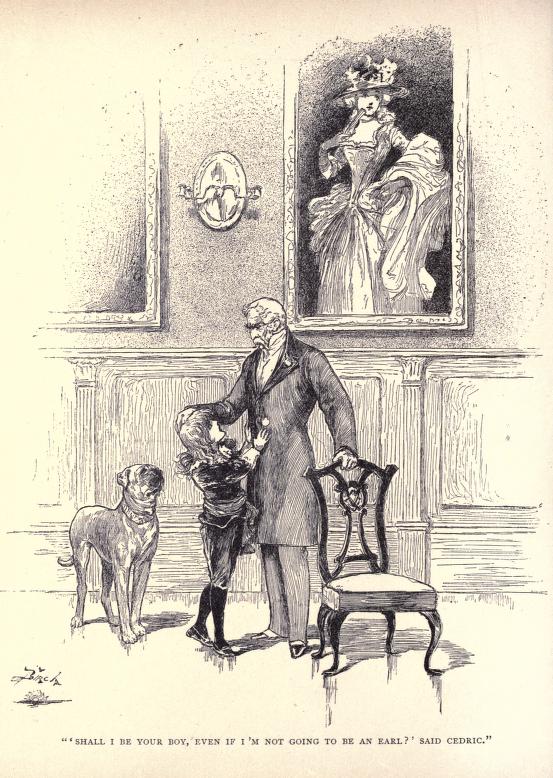 Illustrations of  a 1886 Lord Fauntleroy‘s edition by Reginald Birch

Little Lord Fauntleroy is the first children’s novel written by English playwright and author Frances Hodgson Burnett. It was originally published as a serial in the St. Nicholas Magazine between November 1885 and October 1886, then as a book by Scribner’s in 1886. The accompanying illustrations by Reginald Birch set fashion trends and Little Lord Fauntleroy.

Birch’s artistic talent first emerged in San Francisco, where he helped his father prepare wood-block theatrical posters. He soon attracted a patron in painter Toby Edward Rosenthal, who allowed him to use his studio and helped further his artistic education. From 1873 to 1881 Birch studied and worked in Europe, attending the Royal Academy in Munich and illustrating various publications in Vienna, Paris, and Rome. On his return to the United States he took up residence in New York City, where he became a magazine illustrator.