21 And the LORD God caused a deep sleep to fall upon Adam, and he slept: and he took one of his ribs, and closed up the flesh instead thereof.

22 And the rib, which the LORD God had taken from a man, made he a woman, and brought her unto the man.

23 And Adam said, This is now bone of my bones, and flesh of my flesh: she shall be called Woman, because she was taken out of Man.

24 Therefore shall a man leave his father and his mother, and shall cleave unto his wife: and they shall be one flesh.

25 And they were both naked, the man and his wife, and were not ashamed.

“Saying whatever you want it to say. It is just us expressing ourselves like a child does, you know, however he feels like then. What we’re saying is make your own music. This is Unfinished Music.”
John Lennon 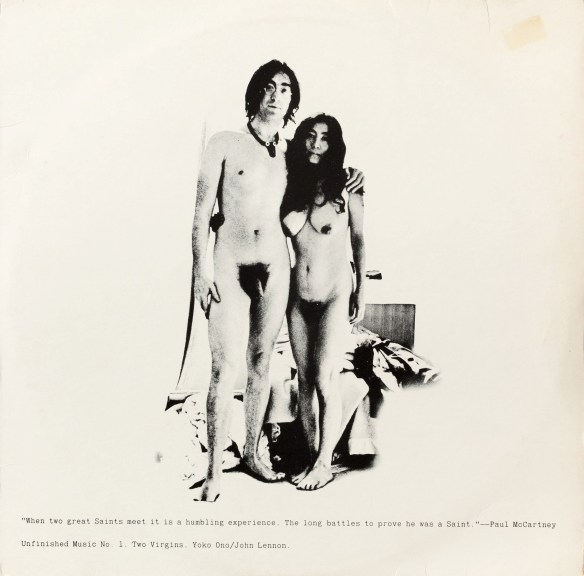 The bottom of the front cover has a quote from Paul McCartney – When two great Saints meet it is a humbling experience. The long battles to prove he was a Saint. On the bottom of the back cover it reads “May 1968. Made in Merrie England.”

Unfinished Music No. 1: Two Virgins is an album released by John Lennon and Yoko Ono in November 1968, on Apple. Following Lennon’s wife, Cynthia Lennon, going on holiday, it was the result of an all-night session of musical experimentation in Lennon’s home studio at Kenwood. Lennon and Ono’s debut album is known not only for its avant garde content, but also for its cover. The album cover features Lennon and Ono naked, which made the album become controversial – to both the public and the record company, EMI, who refused to distribute it. To calm down the controversy, the album was sold in a brown paper bag, and distributed by Track and Tetragrammaton, in the UK and US, respectively. The album, while failing to the chart in the UK, reached number 124 in the US. The album was followed by Unfinished Music No.2: Life with the Lions.

Lennon and Ono used a time-delay camera, which was set up by Tony Bramwell, to take nude photographs of themselves for the album’s cover, which were taken at 34 Montagu Square, in Marylebone (London), the location of a flat leased out by Ringo Starr. in early October 1968. Lennon explained that they “were both a bit embarrassed when we peeled off for the picture, so I took it myself with a delayed action shutter.” The front cover showed them frontally nude including Lennon’s penis and Ono’s breasts and pudendal cleft, and both Lennon’s and Ono’s natural pubic hair, while the rear cover showed them nude from behind including their buttocks. Lennon’s idea was to have the nude shot for the front album cover. Neil Aspinall said that Lennon gave the roll of film to an Apple employee, known as Jeremy, with instructions that the pictures were to be developed. Jeremy said that the pictures were “mind-blowing”, Aspinall, however, said that “Everything was always “mind-blowing” to Jeremy” then going on to say: “but – just that one time – he was actually right. He couldn’t believe it.” 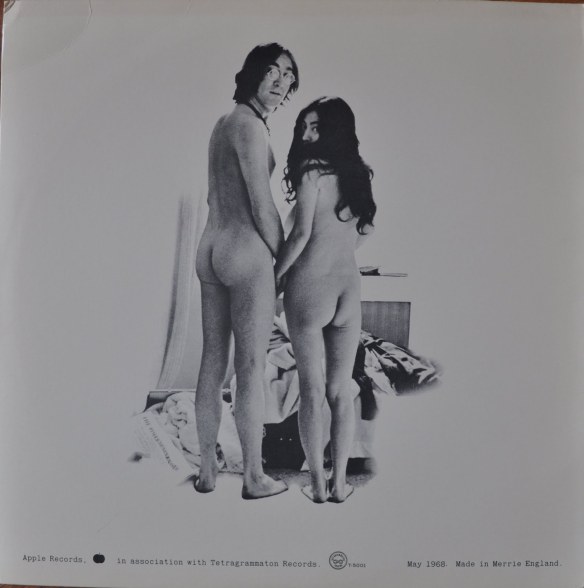 The cover provoked an outrage, prompting distributors to sell the album in a plain brown wrapper, covering the nude front cover. Quotes from Genesis Chapter 2 were placed on the back of the brown bag, which were chosen by Derek Taylor. The album’s title came from the couple’s feeling that they were “two innocents, lost in a world gone mad”, and because after making the recording, the two consummated their relationship. Lennon had said that the album cover “just seemed natural for us. We’re all naked really.” Ono saw the cover as a significant declaration: “I was in the artistic community, where a painter did a thing about rolling a naked woman with blue paint on her body on a canvas; […] that was going on at the time. The only difference was that we were going to stand together, which I thought was very interesting […] it was just standing straight. I liked that concept.” Copies of the album were impounded as obscene in several jurisdictions (including 30,000 copies in New Jersey in January 1969). Lennon commented that the uproar seemed to have less to do with the explicit nudity, and more to do with the fact that the pair were rather unattractive (and the photo unflattering; Lennon described it later as a picture of “two slightly overweight ex-junkies”).