Leave Me Alone, a song featured on Michael Jackson‘s seventh studio album, Bad in 1987, was a response to negative and false stories about Jackson that frequently appeared in the media and tabloids post-1986 after the monumental success of Thriller. Beginning in 1986, the tabloids began to publish false stories about Jackson, one of the first being a story claiming that Jackson slept in a hyperbaric oxygen chamber to slow the aging process. A picture leaked out to the media of him lying down in a hyberbaric chamber at a hospital he visited. An unknown person took the picture of Jackson while he was testing out the chamber out of curiosity.

When Jackson bought a pet chimpanzee named Bubbles, the media viewed it as evidence of Jackson’s increasing detachment from reality. It was also reported that Jackson had offered to buy the bones of Joseph “The Elephant Man” Merrick; Jackson stated that the story was “a complete lie”. These stories inspired the nickname “Wacko Jacko”, which Jackson acquired the following year, and would come to despise. Another frequent response from the media was about Jackson’s plastic surgery. Jackson’s manager said of the media’s criticism towards the topic, “So many terrible things have been written. Okay, so he had his nose fixed, and the cleft — big deal. I got news for you, my nose has broke five times. It’s been fixed twice. Who gives a shit? Who cares? Elvis Presley had his nose done. Marilyn Monroe had her nose done, had her breasts done? Everybody’s had it done.”

The song has been viewed as having a “paranoia theme”, a theme that Jackson had frequently used on previous studio albums. The Atlantic felt that Jackson showed “obvious expressions of distrust” in the song and that the song was one of multiple songs where Jackson’s “persistent loneliness in his music” was “prominent”.In 2009, J. Edward Keyes, of Rolling Stone, described Leave Me Alone as sounding like “vintage Michael” and the song works because of its music, “a batch of thick chords for Jackson to vamp over”. Keyes noted that the song was a “kind of darker inversion” of The Way You Make Me Feel, and that Leave Me Alone was “worked-up and angry, and Jackson’s aggressive scraping of the high notes makes plain his frustration.” 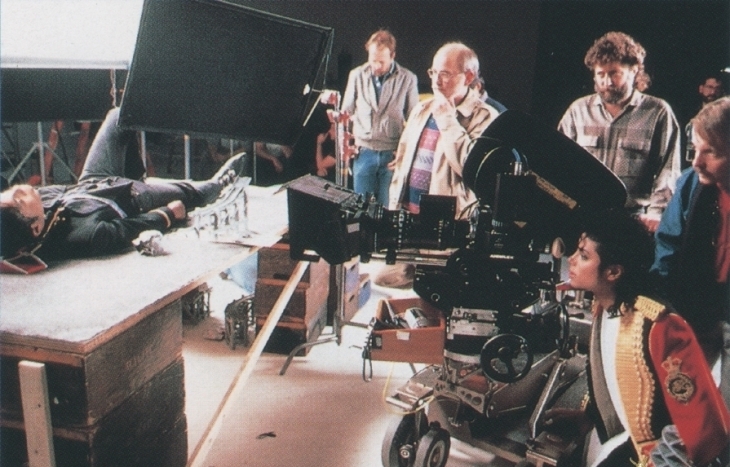 The music video for Leave Me Alone, was directed by Jim Blashfield, produced by Jim Blashfield and Paul Diener and released on January 2, 1989. The video was also featured in the 1988 film Moonwalker. In essence, the video is an amusement park consisting of stylistically crude images based around Jackson’s successful career since 1982’s Thriller. There is an emphasis on the tabloid view of Jackson’s personal life and public image, referring to the nickname “Wacko Jacko” given to him by the press, and the various headlines associated with him in the 1980s. Lampooning rumours that he tried to purchase Joseph Merrick’s bones, Jackson dances with stop motion “Elephant Man” bones in the video. This particular segment (without the image of the bones) was used for the single’s cover art, and the boneless video segment was featured in Moonwalker trailer.

In the video, there are images of shrines to actress Elizabeth Taylor, a real life close friend of Jackson. Throughout the video newspaper headlines, published by “National Intruder”, with bizarre titles are shown, such as “Michael’s Space-Age Diet” and “Michael Proposes to Liz”. Another notable scene in the music video was a nose being chased by a surgical scalpel, which was reference to Jackson’s plastic surgery being criticized by the media. At the end of the video, it is revealed that a gigantic Jackson himself is the amusement park. He breaks free, tearing the park to pieces. That scene is a somewhat reminiscent of Gulliver’s Travels, where Gulliver eventually breaks free from the Lilliputians’ grasp from Lilliput.