Hypnerotomachia Poliphili (from Greek hýpnos, ‘sleep’, éros, ‘love’, and máchē, ‘fight’), called in English Poliphilo’s Strife of Love in a Dream or The Dream of Poliphilus. The book has long been sought after as one of the most beautiful incunabula ever printed. It is actually anonymous, but an acrostic formed by the first, elaborately decorated letter in each chapter in the original Italian reads POLIAM FRATER FRANCISCVS COLVMNA PERAMAVIT, “Brother Francesco Colonna has dearly loved Polia.”, that’s why this romance is said to be by Francesco Colonna.

First published in Venice in 1499 by Aldo Manutius, in an elegant page layout, with refined woodcut illustrations in an Early Renaissance style, Hypnerotomachia Poliphili presents a mysterious arcane allegory in which Poliphilo pursues his love Polia through a dreamlike landscape, and is, seemingly, at last reconciled with her by the Fountain of Venus. 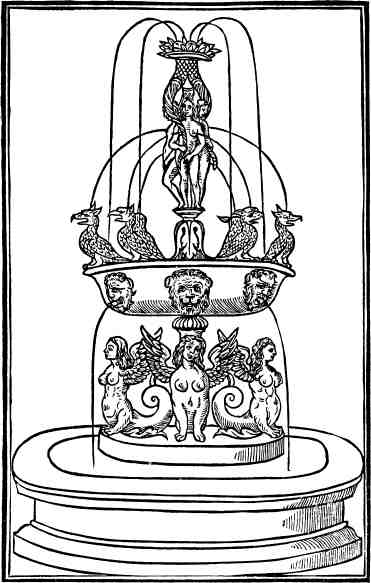 The book is illustrated with 168 exquisite woodcuts showing the scenery, architectural settings, and some of the characters Poliphilo encounters in his dreams. They depict scenes from Poliphilo’s adventures, or the architectural features over which the text rhapsodizes, in a simultaneously stark and ornate line art style which perfectly integrates with the type. These images are also interesting because they shed light on what people in the Renaissance fancied about the alleged æsthetic qualities of Greek and Roman antiquities.

The typography is famous for its quality and clarity, in a roman typeface cut by Francesco Griffo, a revised version of a type which Aldus had first used in 1496 for the De Aetna of Pietro Bembo. The type was revived by the Monotype Corporation in 1923 as Poliphilus. Another revival, of the earlier version of Griffo’s type, was completed under the direction of Stanley Morison in 1929 as Bembo. The type is thought to be one of the first examples of the italic typeface, and unique to the Aldine Press in incunabula.

The psychologist Carl Jung admired the book, believing the dream images presaged his theory of archetypes. The style of the woodcut illustrations had a great influence on late-nineteenth-century English illustrators, such as Aubrey Beardsley, Walter Crane, and Robert Anning Bell.

The story begins with Poliphilo, who has spent a restless night because his beloved, Polia (literally “Many Things”), shunned him. Poliphilo is transported into a wild forest, where he gets lost, encounters dragons, wolves and maidens and a large variety of architecture, escapes, and falls asleep once more.

He then awakens in a second dream, dreamed within the first. In the dream, he is taken by some nymphs to meet their queen, and there he is asked to declare his love for Polia, which he does. He is then directed by two nymphs to three gates. He chooses the third, and there he discovers his beloved. They are taken by some more nymphs to a temple to be engaged. Along the way they come across five triumphal processions celebrating the union of the lovers. Then they are taken to the island of Cythera by barge, with Cupid as the boatswain; there they see another triumphal procession celebrating their union. The narrative is interrupted, and a second voice takes over, as Polia describes his erotomachia from her own point of view.

Poliphilo resumes his narrative after one-fifth of the book. Polia rejects Poliphilo, but Cupid appears to her in a vision and compels her to return and kiss Poliphilo, who has fallen into a deathlike swoon at her feet, back to life. Venus blesses their love, and the lovers are united at last. As Poliphilo is about to take Polia into his arms, Polia vanishes into thin air and Poliphilo wakes up.

The book is briefly mentioned in The Histories of Gargantua and Pantagruel (1532–34) by François Rabelais: “Far otherwise did heretofore the sages of Egypt, when they wrote by letters, which they called hieroglyphics, which none understood who were not skilled in the virtue, property, and nature of the things represented by them. Of which Orus Apollon hath in Greek composed two books, and Polyphilus, in his Dream of Love, set down more…” (Book 1, Ch. 9.)

The 1993 novel The Club Dumas by Arturo Pérez-Reverte mentions the 1545 edition of the Hypnerotomachia (Ch. 3). The book is again mentioned in Roman Polanski‘s 1999 film, The Ninth Gate, based loosely on Pérez-Reverte’s novel (this time, by its Italian title, “La Hypnerotomachia di Poliphilo“).

Opera by Jules Massenet to a French libretto by Édouard Blau, Paul Milliet and Georges Hartmann, based on the German epistolary novel The Sorrows of Young Werther by Johann Wolfgang von Goethe.

In this “hand-painted dream photograph” — as Salvador Dalí generally called his paintings — we find a seascape of distant horizons and calm waters, perhaps Port Lligat, amidst which Gala is the subject of the scene. Next to the naked body of the sleeping woman, which levitates above a flat rock that floats above the sea, Dalí depicts two suspended droplets of water and a pomegranate, a Christian symbol of fertility and resurrection. Above the pomegranate flies a bee, an insect that traditionally symbolizes the Virgin.

In the upper left of the painting a fish bursts out of the pomegranate, and in turn spews out a tiger who then spews out another tiger and a rifle with a bayonet that will sting Gala in the arm. Above them an elephant with long flamingo legs, found in other compositions of the period such as Dalí’s The Temptations of St. Anthony, carries on its back an obelisk.

The elephant is a distorted version of the “Pulcino della Minerva” sculpture by Gian Lorenzo Bernini facing the church of Santa Maria sopra Minerva in Rome. The smaller pomegranate floating between two droplets of water may symbolize Venus, especially because of the heart-shaped shadow it casts. It may also be used as a Christian symbol of fertility and resurrection. This female symbolism may contrast with the phallic symbolism of the threatening creatures.

The Pulcino della Minerva, the famous elephant sculpture by Gian Lorenzo Bernini and Ercole Ferrata, making the base of one of Rome’s eleven Egyptian obelisks

The inspiration for the unusual composition came from Hypnerotomachia Poliphili (“Poliphilo’s Dream of the Strife of Love“), an unusual 15th century novel probably by Italian Dominic priest and monk Francesco Colonna. Scholars have also attributed the book to Leon Battista Alberti, and earlier, to Lorenzo de Medici. The novel’s main character meets an elephant made of stone carrying an obelisk, and the accompanying woodcut illustration in the book is quite similar to Bernini’s design for the base for the obelisk. The curious placement of the obelisk through the body of the elephant is identical.

The bayonet, as a symbol of the stinging bee, may thus represent the woman’s abrupt awakening from her otherwise peaceful dream. This is an example of Sigmund Freud’s influence on surrealist art and Dalí’s attempts to explore the world of dreams in a dreamscape.

The bee around the smaller pomegranate is repeated symbolically. The two tigers represent the body of the bee (yellow with black stripes) and the bayonet its stinger. The fish may represent the bee’s eyes, because of similarity of the fish’s scaly skin with the scaly complex eyes of bees.

In 1962, Dalí said his painting was intended “to express for the first time in images Freud’s discovery of the typical dream with a lengthy narrative, the consequence of the instantaneousness of a chance event which causes the sleeper to wake up. Thus, as a bar might fall on the neck of a sleeping person, causing them to wake up and for a long dream to end with the guillotine blade falling on them, the noise of the bee here provokes the sensation of the sting which will awaken Gala.” The guillotine anecdote refers to a dream reported by Alfred Maury in Le sommeil et les rêves and related by Sigmund Freud in The Interpretation of Dreams.

It has also been suggested that the painting is “a surrealist interpretation of the Theory of Evolution”.