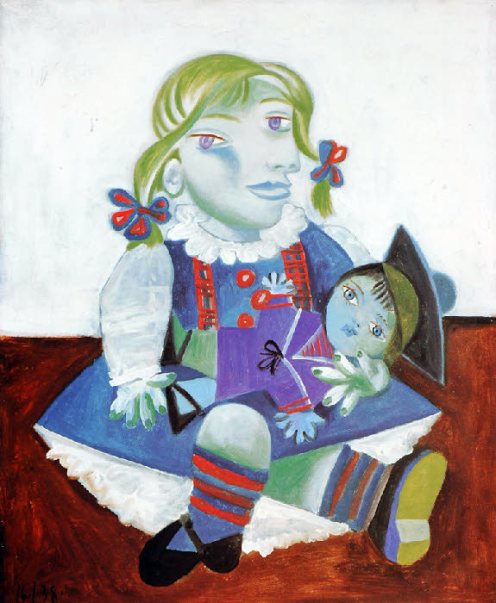 Maya with Doll is an oil painting by Pablo Picasso. The New York Times described it as “a colorful Cubist portrait of Picasso’s daughter as a child clutching a doll.” Some of Picasso’s portraits of small children from the late 1930s are reminiscent of Rousseau’s paintings. 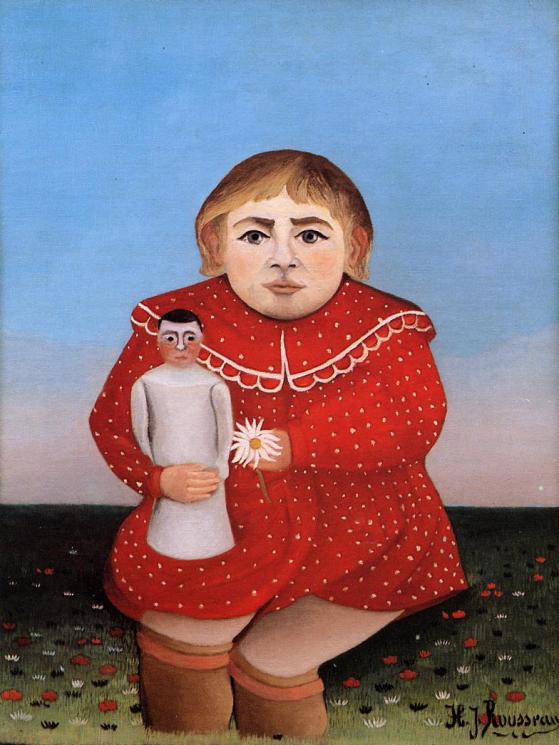 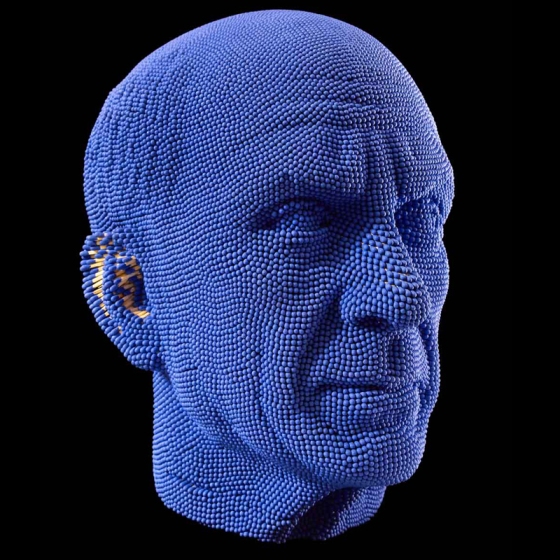 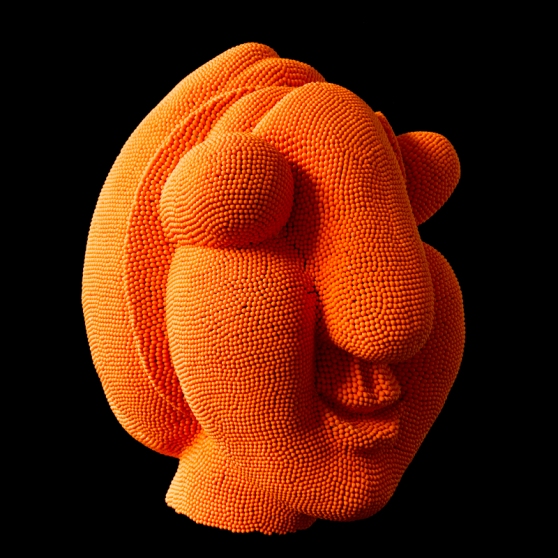 “Three matches one by one struck in the night
The first to see your face in its entirety
The second to see your eyes
The last to see your mouth
And the darkness all around to remind me of all these
As I hold you in my arms.)” 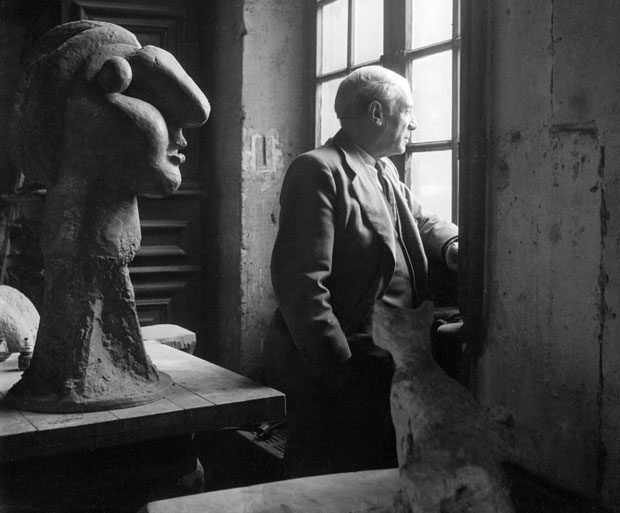 Pablo Picasso in his studio with a sculptural portrait of Marie-Thérèse Walter. Photo possibly by Brassaï

“This love
So violent
So fragile
So tender
So hopeless
This love
Beautiful as the day
And bad as the weather
When the weather is bad
This love so true
This love so beautiful
So happy
So joyous
And so pathetic
Trembling with fear like a child in the dark
And so sure of itself
Like a tranquil man in the middle of the night
This love that made others afraid
That made them speak
That made them go pale
This love intently watched
Because we intently watch it
Run down hurt trampled finished denied forgotten
Because we ran it down hurt it trampled
it finished it denied it forgot it
This whole entire love
Still so lively
And so sunny
It’s yours
It’s mine
That which has been
This always new thing
And which hasn’t changed
As true as a plant
As trembling as a bird
As warm as live as summer
We can both of us
Come and go
We can forget
And then go back to sleep
Wake up suffer grow old
Go back to sleep again
Awake smile and laugh
And feel younger
Our love stays there
Stubborn as an ass
Lively as desire
Cruel as memory
Foolish as regrets
Tender as remembrance
Cold as marble
Beautiful as day
Fragile as a child
It watches us, smiling
And it speaks to us without saying a word
And me I listen to it, trembling
And I cry out
I cry out for you
I cry out for me
I beg you
For you for me for all who love each other
And who loved each other
Yes I cry out to it
For you for me and for all the others
That I don’t know
Stay there
There where you are
There where you were in the past
Stay there
Don’t move
Don’t go away
We who loved each other
We’ve forgotten you
Don’t forget us
We had only you on the earth
Don’t let us become cold
Always so much farther away
And anywhere
Give us a sign of life
Much later on a dark night
In the forest of memory
Appear suddenly
Hold your hand out to us
And save us” 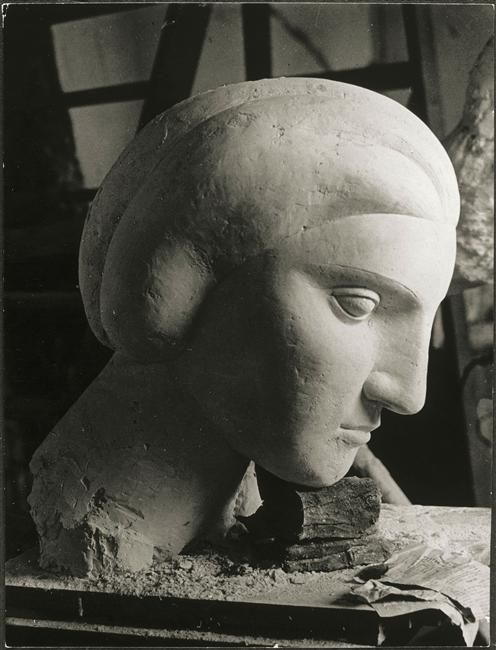 The photographer Brassaï visited Pablo Picasso’s studio in 1933 and commented on the classical and undulating character of the majority of works he found there: “He opened the door to one of those immense naves, and we could see, radiant in white, a city of sculptures… I was astonished by the roundness of all these forms. A new woman had entered Picasso’s life: Marie-Thérèse Walter” 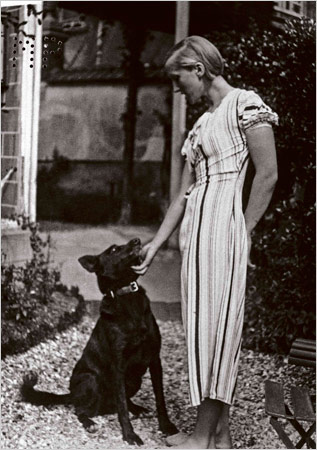 Marie-Thérèse Walter at 19 with her mother’s dog Dolly.

On 8 January 1927, Marie first met Picasso in front of the Galeries Lafayette in Paris. Author Herbert T. Schwartz dates their first meeting back to January 1925, at Gare Saint-Lazare, Paris; whereas author Roy MacGregor-Hastie dates the encounter up to 8 January 1928.

At that time she was seventeen years old; he was 45 and still living with his first wife, Olga Khokhlova, a Russian ballerina, with whom he had a five-year-old son.

He and Marie-Thérèse, began a relationship, which was kept secret from his wife until 1935. From 1927 onwards, Walter lived close to Picasso’s family, who lived in an apartment provided by and next door to his art dealer and friend, Paul Rosenberg, in Rue La Boétie. From 1930, she stayed in a house opposite Picasso’s at Rue La Boétie 44. It ended when Picasso moved on to his next mistress, artist Dora Maar. 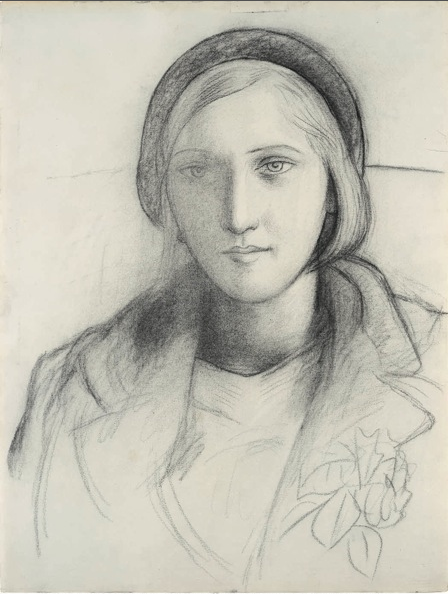 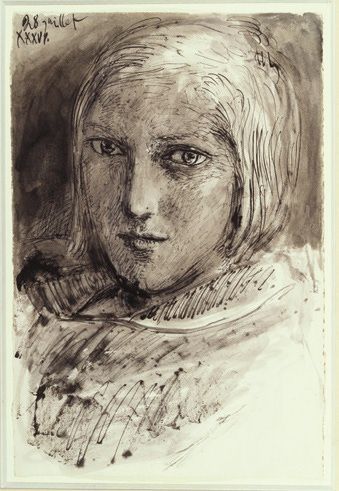 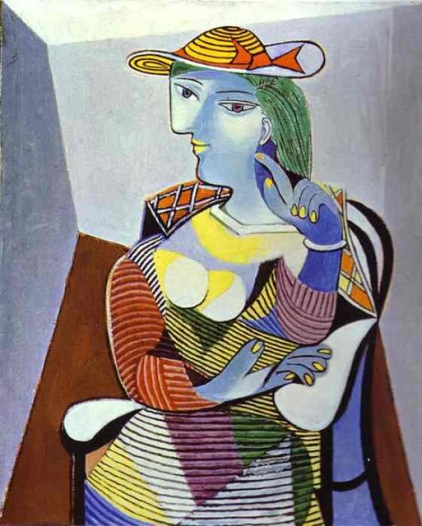 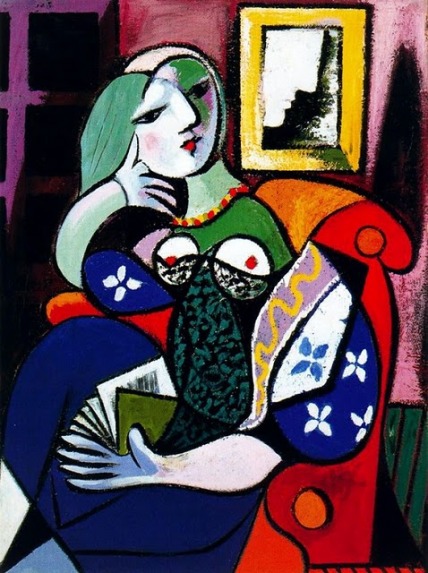 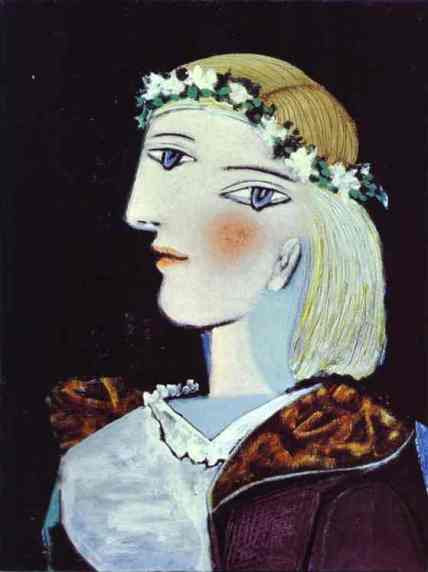 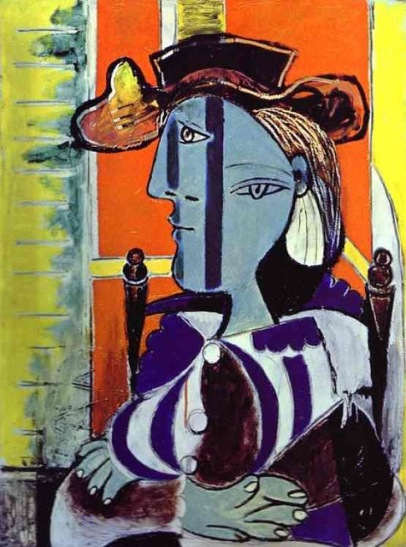 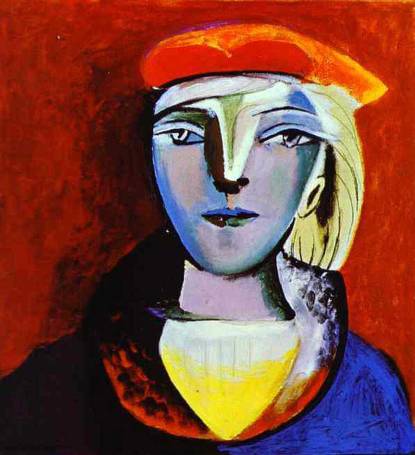 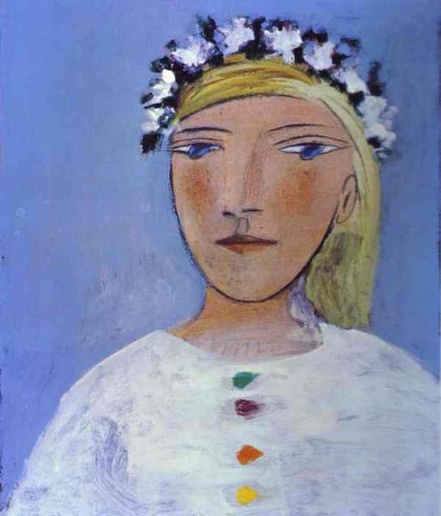 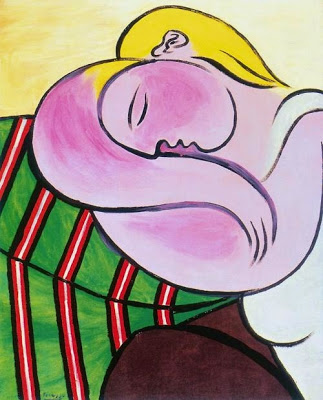 In Picasso’s paintings, Walter appears as blonde, sunny, and bright, as in Le Rêve (1932) or in Woman with Yellow Hair (1931), in contrast to his darker portrayal of Dora Maar, whom Picasso painted as the tortured “weeping woman”. Picasso documented their early years together, albeit cryptically, by including the monograms “MT” and “MTP” in his still lifes and portraits of the time.

In July 1930, Picasso bought a castle at Boisgeloup close to Gisors in the Normandie, which he used as a studio for sculptures mainly. Marie was the unseen shadow of the family and became his model and muse for both paintings and sculptures. 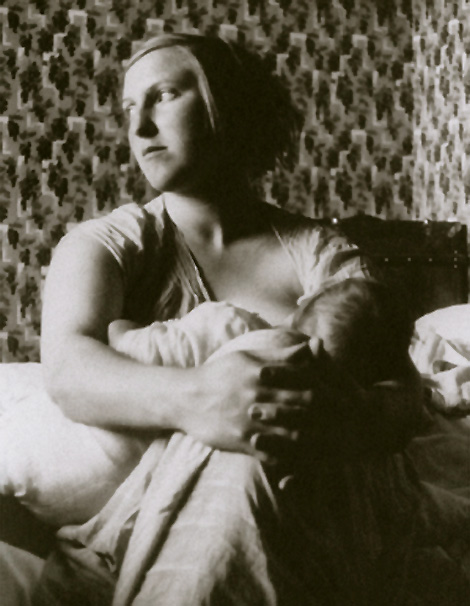 In 1935, Marie became pregnant. When Picasso’s wife, Olga, was informed by a friend that her husband had a longtime mistress who was expecting a child, she immediately left Picasso and moved to the South of France with their son Paulo. Picasso and Olga never divorced, because Picasso wanted to avoid the even division of property dictated by French law; instead, they lived separately until her death in 1955.

On 5 September 1935, Picasso and Marie’s daughter, María de la Concepción, called “Maya”, was born. Marie and Maya stayed with Picasso at Juan-les-Pins in the South of France from 25 March to 14 May 1936, and then at Le Tremblay-sur-Mauldre, 25 kilometres from Versailles, where Picasso visited on the weekends and some weekdays to play with his daughter. Maya also modelled for some of his paintings, including Maya with Doll (1938). 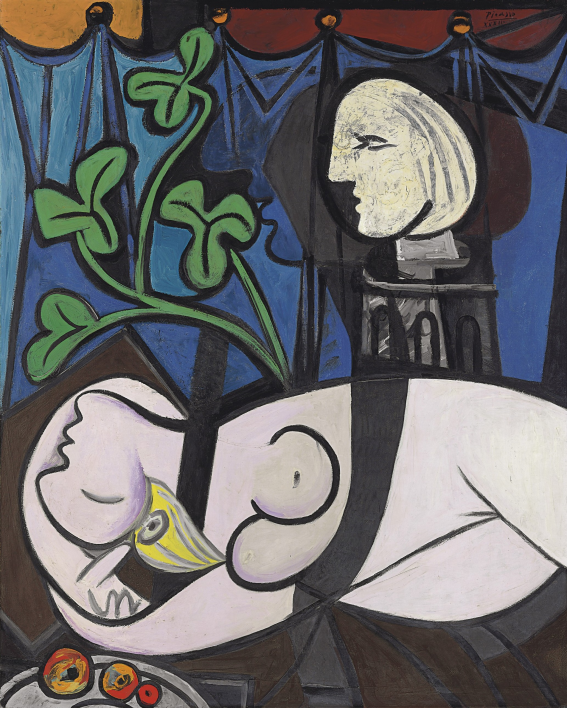 Nude, Green Leaves and Bust is one of a series of portraits that Pablo Picasso painted of his mistress and muse Marie-Thérèse Walter from 1932. The vibrant blue and lilac canvas is more than 5 feet (1.5 m) tall.

At the time, Picasso was in an exclusive contractual relationship with noted impressionist and post-impressionist French-Jewish art dealer Paul Rosenberg, who bought the painting direct from his friend. With the increasing tones of an approaching war, in the late 1930s Rosenberg started to distribute works from his 2,000+ piece collection around the world, and used the 1939 New York World’s Fair as the excuse to ship the painting outside France. After the 1940 Nazi invasion of France, on reaching New York via Lisbon in September 1940, Rosenberg opened a new branch of his noted gallery on East 57th street, and put the painting back on display.

From there it was bought by Sidney and Frances Brody in 1951, and was publicly exhibited only once in 1961 to commemorate Picasso’s 80th birthday.

Frances Brody died in November 2009. On May 4, 2010, the painting was sold at Christie’s in New York City, who won the rights to auction the collection against London-based Sotheby’s. The collection as a whole was valued at over US$150 million, while the work was originally expected to earn $80 million at auction.

There were eight bidders at the auction house, while the winning bid was taken via telephone for $95 million. Including the buyer’s premium, the price reached US$106.5 million. When inflation is ignored, the painting broke the record price for an art work sold at auction until it was surpassed by the selling of Edvard Munch‘s The Scream on May 2, 2012 for US$120 million. 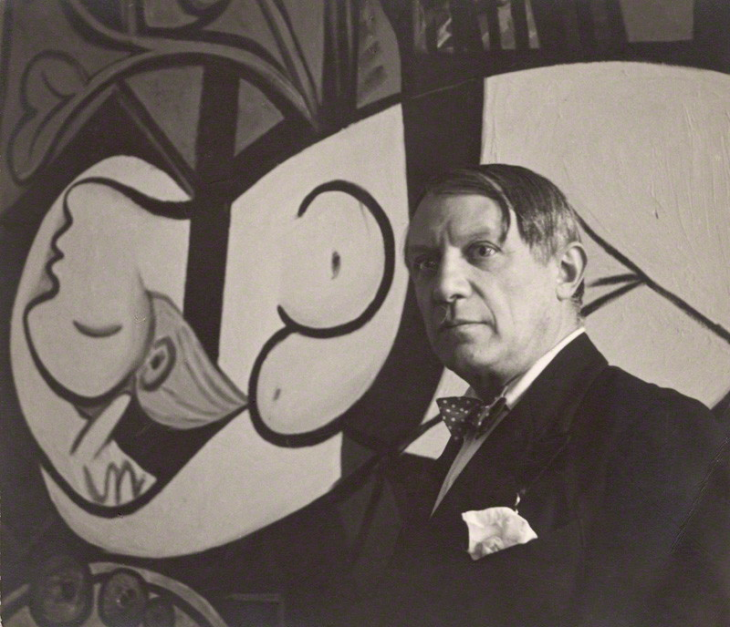 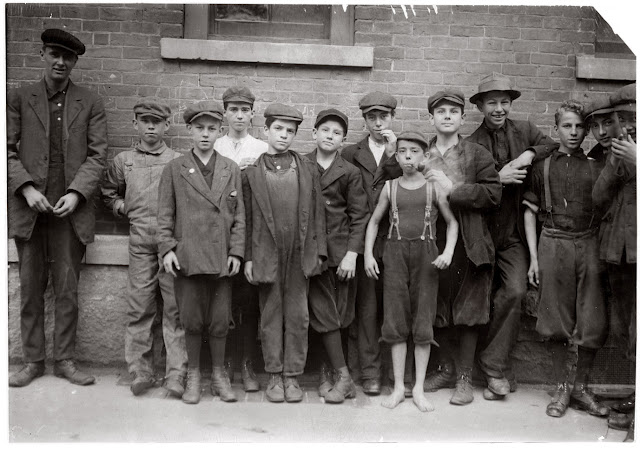 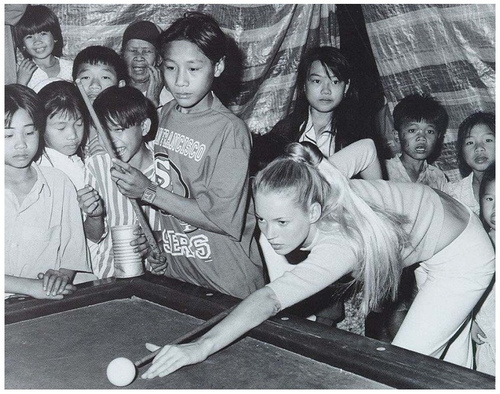 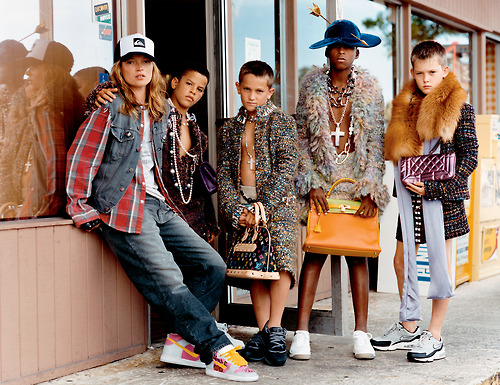 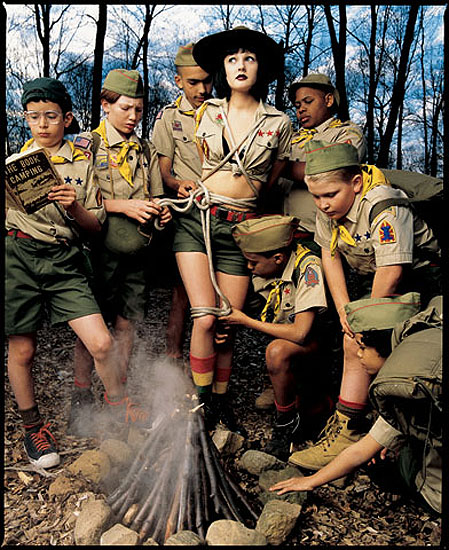 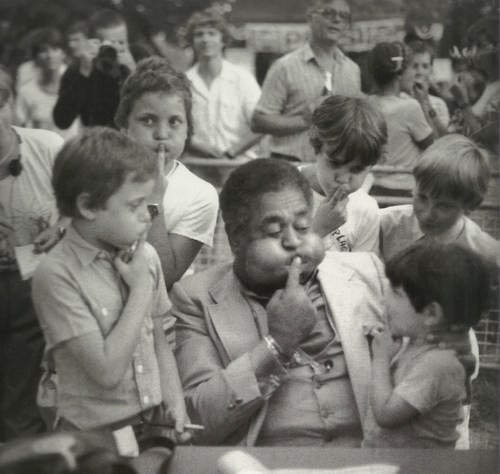 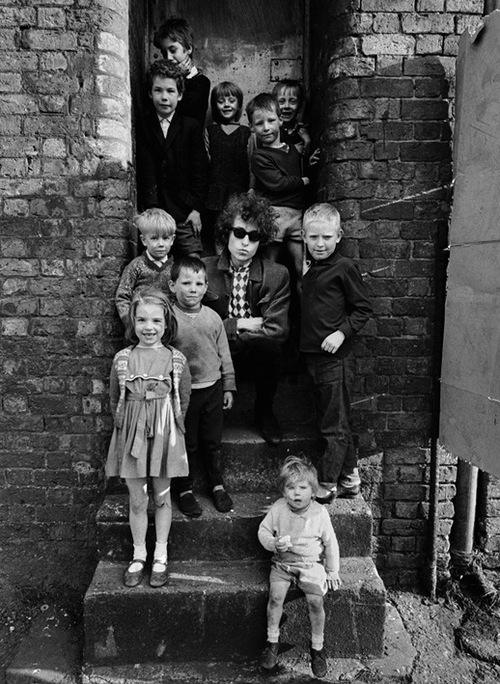 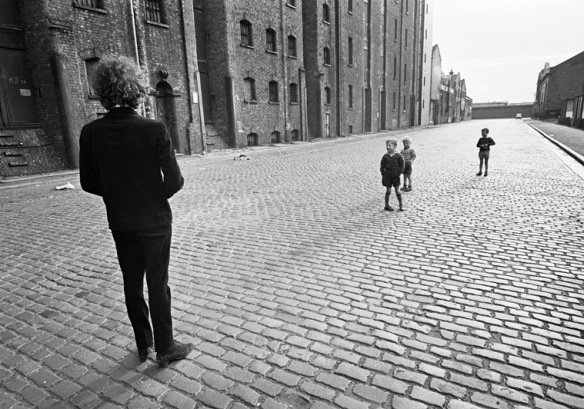 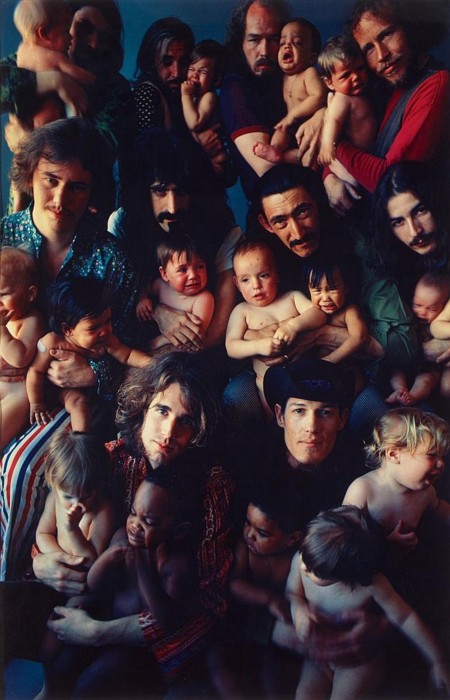 Frank Zappa and Mothers of Invention. Art Kane, circa 1968

For this Life magazine session, Art Kane wanted to portray the musical group as a family and took the idea of mothers — and their babies — as a theme.  He gathered some of the musicians’ infants, then booked about thirty more from a modeling agency.  As soon as they began to shoot, one of the babies urinated, which inspired the others to do so as well, creating in Kane’s words, “the fountains of Rome.” 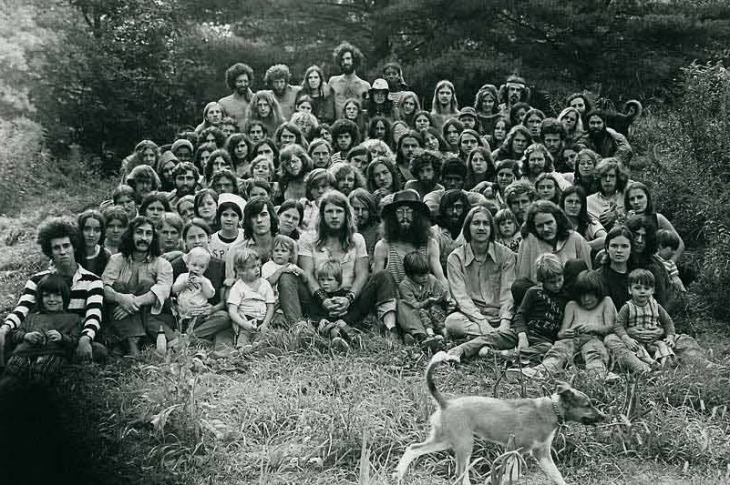 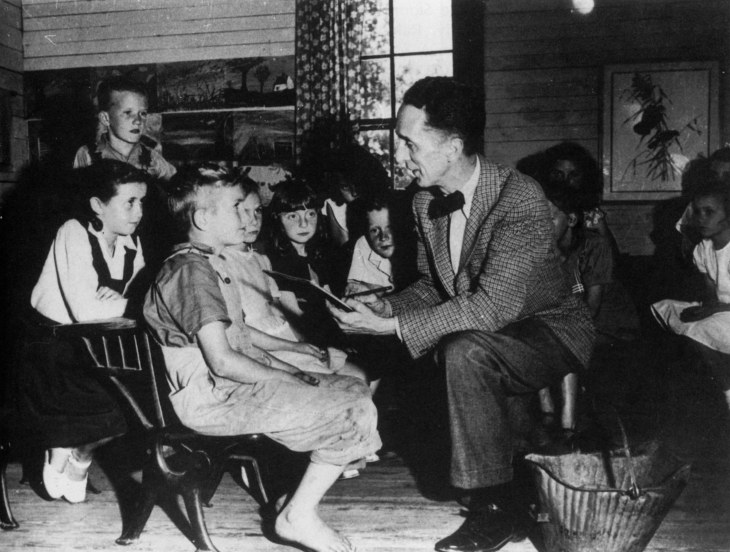