The Man Who Sold the World is the third studio album by David Bowie, originally released on Mercury Records in November 1970 in the US, and in April 1971 in the UK. The album was Bowie’s first with the nucleus of what would become the Spiders from Mars, the backing band made famous by The Rise and Fall of Ziggy Stardust and the Spiders from Mars in 1972. Though author David Buckley has described Bowie’s previous record David Bowie (Space Oddity) as “the first Bowie album proper”, NME critics Roy Carr and Charles Shaar Murray have said of The Man Who Sold the World, “this is where the story really starts”. Departing from the folk music of Bowie’s debut album, The Man Who Sold the World is a hard rock and heavy metal album. It has been claimed that this album’s release marks the birth of glam rock.

The album was written and rehearsed at David Bowie’s home in Haddon Hall, Beckenham, an Edwardian mansion converted to a block of flats that was described by one visitor as having an ambience “like Dracula‘s living room”. As Bowie was preoccupied with his new wife Angie at the time, the music was largely arranged by guitarist Mick Ronson and bassist/producer Tony Visconti. Although Bowie is officially credited as the composer of all music on the album, biographers such as Peter Doggett have marshaled evidence to the contrary, quoting Visconti saying “the songs were written by all four of us. We’d jam in a basement, and Bowie would just say whether he liked them or not.”

Much of the album had a distinct heavy metal edge that distinguishes it from Bowie’s other releases, and has been compared to contemporary acts such as Led Zeppelin and Black Sabbath. The record also provided some unusual musical detours, such as the title track’s use of Latin rhythms to hold the melody. The sonic heaviness of the album was matched by the subject matter, which included insanity (All the Madmen), gun-toting assassins and Vietnam War commentary (Running Gun Blues), an omniscient computer (Saviour Machine), and Lovecraftian Elder Gods (The Supermen). The song She Shook Me Cold was an explanation of a heterosexual encounter. The album has also been seen as reflecting the influence of such figures as Aleister Crowley, Franz Kafka and Friedrich Nietzsche.

The original 1970 US release of The Man Who Sold the World employed a cartoon-like cover drawing by Bowie’s friend Michael J. Weller, featuring a cowboy in front of the Cane Hill mental asylum 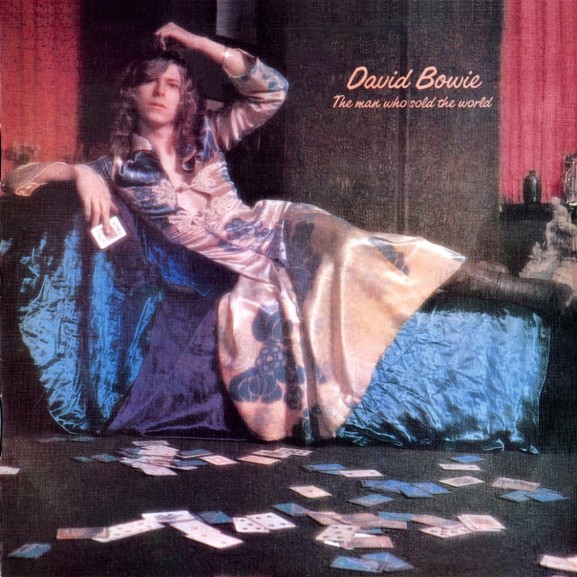 The first UK cover, on which Bowie is seen reclining in a Mr Fish “man’s dress”, was an early indication of his interest in exploiting his androgynous appearance. The dress was designed by British fashion designer Michael Fish, and Bowie also used it in February 1971 on his first promotional tour to the United States, where he wore it during interviews despite the fact that the Americans had no knowledge of the as yet unreleased UK cover. It has been said that his “bleached blond locks, falling below shoulder level”, were inspired by a Pre-Raphaelite painting by Dante Gabriel Rossetti.

In May 1984, Jean-Michel Basquiat has his first one-artist exhibition at the Mary Boone Gallery. Paintings include Bird as Buddha, Brown Spots, Eye, Untitled (Africa), and Wine of Babylon. The show was met by mixed reviews:

“The early work is of an original primitivism, with a graffiti heritage. The originality has quickly become stylized and somewhat self-conscious in this current show” (Donald Kuspit)

“The young artist uses color well …. But more remarkable is the educated quality of his line and the stateliness of his compositions, both of which bespeak a formal training that, in fact, he never had” (Vivien Raynor).

“And throughout floated a disembodied eye, which seemed to allude both to the self-the ‘I’-and to the witness or seer. But one sensed little of what Basquiat is witness to, or of why it bears accounting” (Kate Linker). 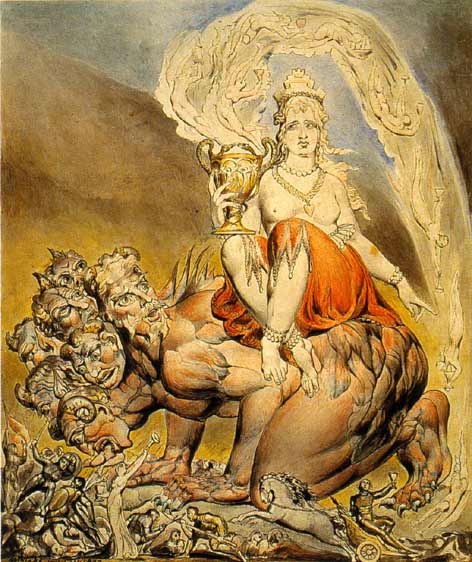 Babalon (also known as the Scarlet Woman, Great Mother or Mother of Abominations) is a goddess found in the mystical system of Thelema, which was established in 1904 with English author and occultist Aleister Crowley‘s writing of The Book of the Law (although the name Babalon does not occur in that text). In her most abstract form, she represents the female sexual impulse and the liberated woman; although in the Creed of the Gnostic Mass she is also identified with Mother Earth, in her most fertile sense. At the same time, Crowley believed that Babalon had an earthly aspect in the form of a spiritual office, which could be filled by actual women—usually as a counterpart to his own identification as “To Mega Therion” (The Great Beast)—whose duty was then to help manifest the energies of the current Aeon of Horus.

Her consort is Chaos, the “Father of Life” and the male form of the Creative Principle. Babalon is often described as being girt with a sword and riding the Beast. She is often referred to as a sacred whore, and her primary symbol is the Chalice or Graal.

As Crowley wrote in his The Book of Thoth, “she rides astride the Beast; in her left hand she holds the reins, representing the passion which unites them. In her right she holds aloft the cup, the Holy Grail aflame with love and death. In this cup are mingled the elements of the sacrament of the Aeon”.

Perhaps the earliest origin is the ancient city of Babylon, a major metropolis in Mesopotamia (modern Al Hillah in Iraq). Babylon is the Greek variant of Akkadian Babilu (bāb-ilû), meaning “Gateway of the god”. It was the “holy city” of Babylonia from around 2300 BC, and the seat of the Neo-Babylonian empire from 612 BC.

One of the goddesses associated with Babylonia was Ishtar, the most popular female deity of the Assyro-Babylonian pantheon and patron of the famous Ishtar Gate. She is the Akkadian counterpart to the Sumerian Inanna and the cognate to the northwest Semitic goddess Astarte. The Greeks associated her with Aphrodite (Latin Venus), and sometimes Hera. Ishtar was worshipped as a Great Goddess of fertility and sexuality, but also of war and death, and the guardian of prostitutes. She was also called the Great Whore and sacred prostitution formed part of her cult or those of cognate goddesses.