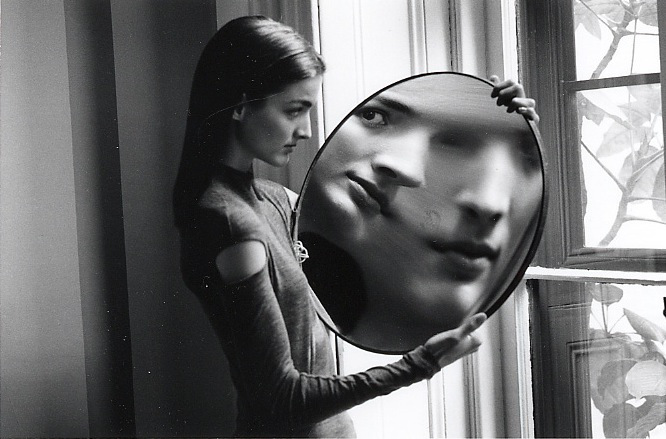 “Odette can never be sure with any certainty which reflection of herself she will see in the mirror”. So the photographer Duane Michals tries to catch at least six images of her. A series of six pictures in which the model looks at herself in a huge mirror, the so called Dr. Heisenberg’s magic mirror. Michals, whose technique is to shoot series of photo, is used to handwrote text near his photographs, thereby giving information in order to reinforce the message and the creative idea that the image itself could not convey. And in this way he tells a story. The Odette’s story who tries to recognize herself in the mirror, but seeing new and unknown sides about her face, she discovers new dimensions about her. And even thought the uncertain may frighten, more over it unveils new sides about things. To be open to the unknown may offer wonders. As the author writes in the last image: “Uncertainty permits anything and everything”.

“We have to remember that what we observe is not nature herself, but nature exposed to our method of questioning”
Werner Heisenberg 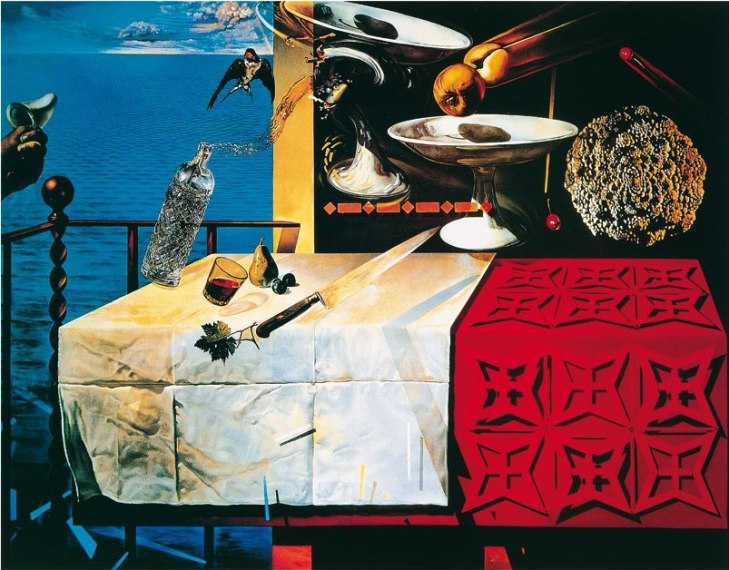 Living Still Life, or Nature Morte Vivante (1956) is a hand oil painting on canvas by the Spanish surrealist Salvador Dalí. The painting was originally known as Nature Morte Vivante and is considered to be one of Dalí’s masterworks. It is his sixth grand masterpiece. Dalí described the work as illustrating “the decomposition of a fruit dish”. The painting is a variation of Floris van Schooten‘s Table with Food (1617).

Schooten’s work is rearranged into objects that rotate and float across the piece. While the picture can be termed a still life, Dalí incorporates irony by making it evident that nothing in the image is actually still. Even the knife on the table, for example, although not seemingly moving at all, is interpreted by the human brain to be in motion. The Heisenberg Principle of Uncertainty is referenced in the piece. The mind infers that no everyday object can simply hover in the air and that gravity must be pulling down on it; therefore, the knife must be in a falling motion.

This painting also depicts the importance of the spiral, which Dali believed was nature’s most perfect form, using it as a symbol of cosmic order. Spiral structures can be found throughout this work, from the rhinoceros horn in the upper left, to the twisting fruit dish in the center, to the meteor-like head of cauliflower on the right. While working on this painting, Dali was thrilled to hear of the discovery that the DNA molecule – the blueprint for all life – had a spiral shape. The double spiral balcony railing to the left is Dali’s acknowledgment of DNA. “For the first time in the history of science,” Dali said, “physics was providing proof of the existence of God.”

By the time Dali painted this work, he had left Surrealism behind and was fully immersed in what he called “Nuclear Mysticism.” Dali felt that the art of his contemporaries was spiritually barren, and he was determined to reanimate art with spirituality. He was convinced that the emerging theories of physics and molecular biology could reveal the mysteries of religion.