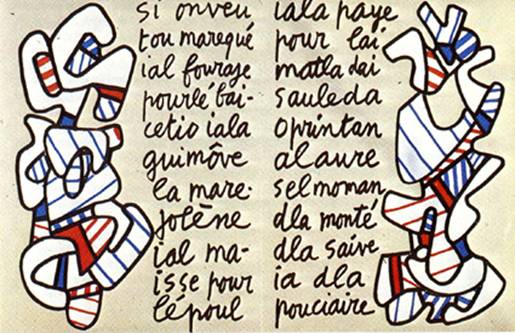 La botte à nique, Jean Dubuffet, 1971. The present work by Jean Dubuffet forms part of a portfolio of screenprints with reproduction drawings and texts by the artist

Jean-Michel Basquiat’s work functions in similar way to Cy Twombly’s; the canvas becomes more like a giant notebook page than a finished composition, with words and images, along with scratch marks and other artifacts of the thought process, intermingling freely as a pictorial representation of a train of thought. The work is really a portrait of Basquiat; what he is thinking about, who his influences are, he wears them all on the surface of his canvas like a patch on his sleeve. René Ricard sums it up beautifully later in the article:

When Jean-Michel writes in almost subliterate scrawl “Safe plush he think” it is not on a Park Avenue facade that would be totally outside the beggar’s venue but on a rusted-out door in a godforsaken neighborhood. Plush to whom safe from what? His is also the elegance of the clochard who lights up a megot with his pinkie raised. If Cy Twombly and Jean Dubuffet had a baby and gave it up for adoption, it would be Jean-Michel. The elegance of Twombly is there but from the same source (graffiti) and so is the brut of the young Dubuffet. Except the politics of Dubuffet needed a lecture to show, needed a separate text, whereas in Jean-Michel they are integrated by the picture’s necessity. I’d rather have a Jean-Michel than a Cy Twombly. I do not live in the classical city. My neighborhood is unsafe.

During the late forties Cy Twombly‘s main interests were German Expressionism, the Dada movement, Kurt Schwitters‘ as well as Chaim Soutine‘s work. Saw for the first time reproductions of works by Jean Dubuffet and Alberto Giacometti which greatly impressed him.

Twombly arrived in Manhattan in 1950 while the New York School painting of Jackson Pollock and Willem de Kooning was in full swing. That same year he continued his studies at the Art Students League in New York City on a tuition scholarship. During the second semester met Robert Rauschenburg who was the first person of his own age to share the same interests and preoccupations as an artist. Upon Robert Rauschenberg’s encouragement, Twombly joined him for the 1951–1952 sessions at Black Mountain College near Asheville, North Carolina – a liberal refuge, a site of free experimentation and exchange in a nation growing increasingly conservative during the Cold War. Among the influential teachers present at this time were Charles Olson, Franz Kline, Robert Motherwell and John Cage. Building on the freedom afforded by the previous generation, the younger artists emphasised libidinal energy integrated through experience.

For eight months spanning 1952–1953 Twombly and Rauschenberg travelled through Europe and north Africa, joined for a while by the writer Paul Bowles. Upon returning to New York, Rauschenberg set up the Fulton Street studio that Twombly sometimes shared. Eleanor Ward invited the two artists to exhibit at her Stable Gallery. 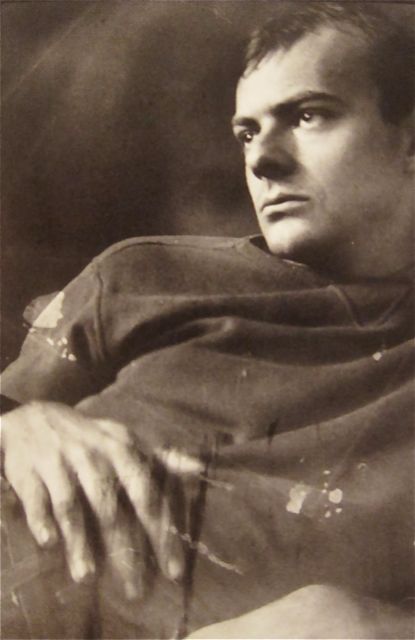 Portraits of Cy Twombly by his colleague Robert Rauschenberg