While the term “dark horse” had long been applied to George Harrison due to his success as a solo artist following The Beatles‘ break-up in 1970, commentators recognise the song as Harrison’s rebuttal to a number of possible detractors: those reviewers who criticized the spiritual content of his 1973 album Living in the Material World; his first wife, Pattie Boyd; and his former band-mates John Lennon and Paul McCartney. Harrison also used the title for that of his record label, and his 1974 North American tour with Ravi Shankar would come to be known as the Dark Horse Tour.

The Tom Wilkes-designed front cover of Dark Horse features a 1956 Liverpool Institute high-school photograph presented inside a lotus flower, behind which a dream-like Himalayan landscape extends to the horizon, where the “deathless Yogi of the Ancient of Days”, Shiv-Goraksha Babaji, sits. While some observers have seen pointed similarities with the Beatles’ iconic Sgt. Pepper’s Lonely Hearts Club Band cover image, Harrison’s choice of artwork reflected his enduring admiration for Terry Gilliam‘s animation on Monty Python’s Flying Circus. In the photo, a thirteen-year-old Harrison is pictured in the centre of the top row, his face tinted blue; school teachers appear dressed in long-sleeve tops bearing a superimposed record-company logo or Om symbol. Wilkes and Harrison disagreed over the size of the Babaji image, which the designer apparently disliked and wanted to reduce in size.

Inside the gatefold cover, around the edges of a tinted photo of Harrison and comedian Peter Sellers walking beside a Friar Park lake, text asks the “Wanderer through this Garden’s ways” to “Be kindly” and refrain from casting “Revengeful stones” if “perchance an Imperfection thou hast found”, the reason being: “The Gardener toiled to make his Garden fair, Most for thy Pleasure.” A speech balloon over the photograph contains the words “Well, Leo! What say we promenade through the park?” This line was taken from the Mel Brooks movie The Producers, a favourite of Sellers and Harrison.

On the back cover, Harrison is pictured sitting on a garden bench, the back timbers of which are apparently carved with his name and that of the album. Similar to Harrison’s attire in the outdoor scenes of the Ding Dong, Ding Dong video clip, Leng refers to his appearance here as resembling the Jethro Tull character Aqualung. Terry Doran‘s photo, given the same orange hue as the one inside the gatefold, was also used on some European picture sleeves for the Ding Dong and Dark Horse singles around this time.

Dark Horse ’​s inner sleeve notes were all the work of Harrison himself, written on a plane early in the tour. Along with the first Harrison-album credit for FPSHOT, and the now-familiar “All glories to Sri Krsna” dedication, his purple pen records various in-jokes while listing the many contributing musicians. As well as the confusing inclusion of Boyd and Eric Clapton‘s names (leading to the assumption that they had actually contributed to the track), the song title Bye Bye, Love is juxtaposed with the words Hello Los Angeles, while “OHLIVERE” would appear to be a reference to Harrison’s new lover and future wife, Dark Horse Records secretary Olivia Arias. The latter is also included among the title track’s musician credits – her contribution being “Trinidad Blissed Out”. Under Ding Dong, aside from the appearance of “Ron Would If You Let Him” on guitar, Friar Park’s original owner, Sir Frank Crisp, is credited for providing “Spirit”. Arias’s face, in a photo taken by tour photographer Henry Grossman, appeared on the record’s side-two face label, while a corresponding picture of Harrison appeared on side one. 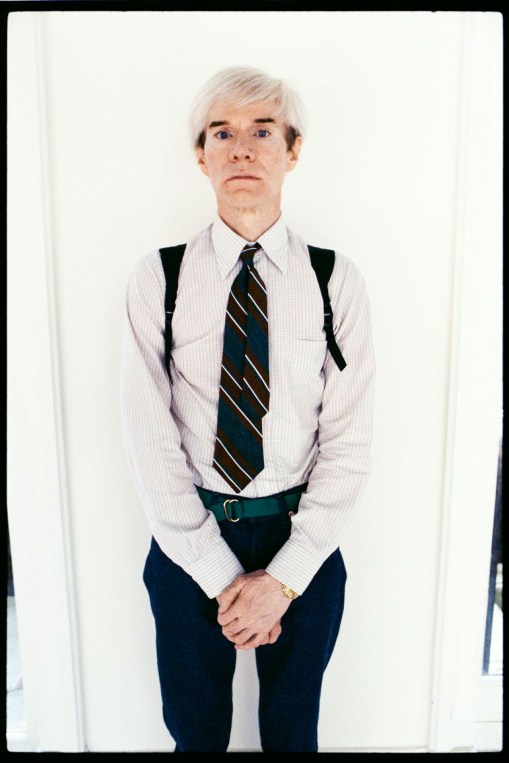 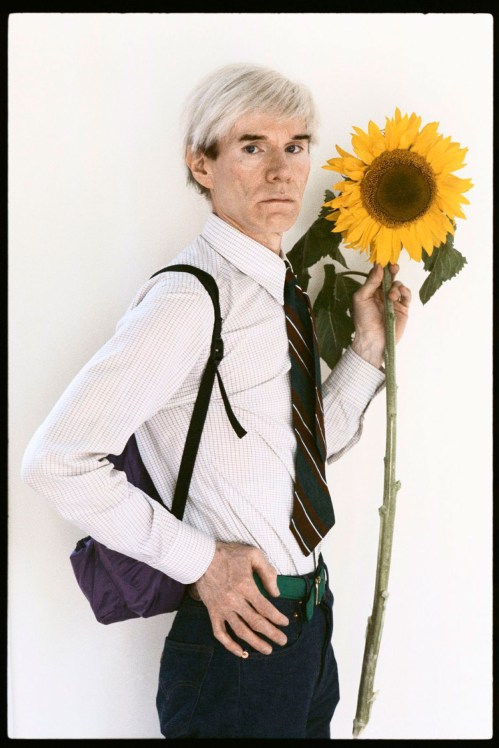 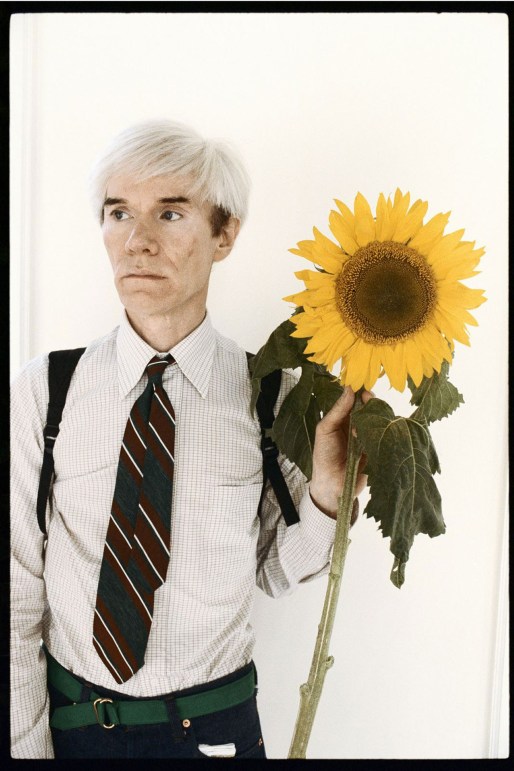 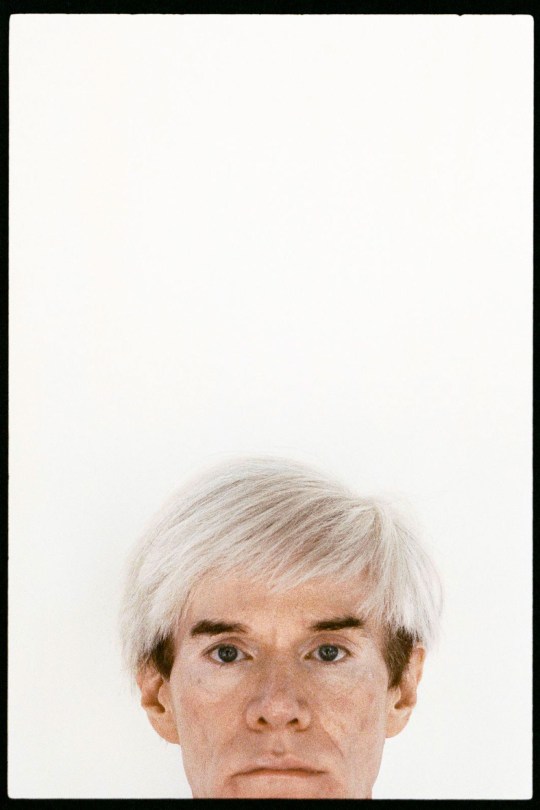 Photographer Steve Wood never wanted to take Andy Warhol‘s portrait. A mutual friend – Elaine Kaufman of New York’s famous Elaine’s restaurant – introduced the pair and suggested they work together. Wood was unconvinced – busy photographing star guests at the 1981 Deauville Film Festival at the time, he had little interest in taking the iconic pop artist as his subject.

“It actually took a few days for me to agree to it,” Wood told us. “I’m not a huge fan of his work, but I was honest with him and said that I preferred more classical art – such as Van Gogh and the Impressionists.” The resulting series of pictures, lost to a dark drawer in Wood’s filming cabinet for the last 30 years, went on display as an exhibition entitled Lost and Found in New York.

“Andy was very easy to work with on the day and he put himself totally in my hands, so that I could work to my vision,” said Wood, who managed to incorporate his love of Van Gogh into the pictures by choosing a sunflower as the main prop. “With everybody I ever work with, I remove direct sunlight – and this was particularly important while shooting Andy as his skin tone could not take direct sunlight. I therefore suggested using the corridor of our hotel, the Royal Hotel in Deauville, which I had already checked had very soft lighting.”

“Andy was gentle and incredibly self-conscious. I believe that was how he always was. He was certainly conscious of his appearance, especially his hair and his hands.” 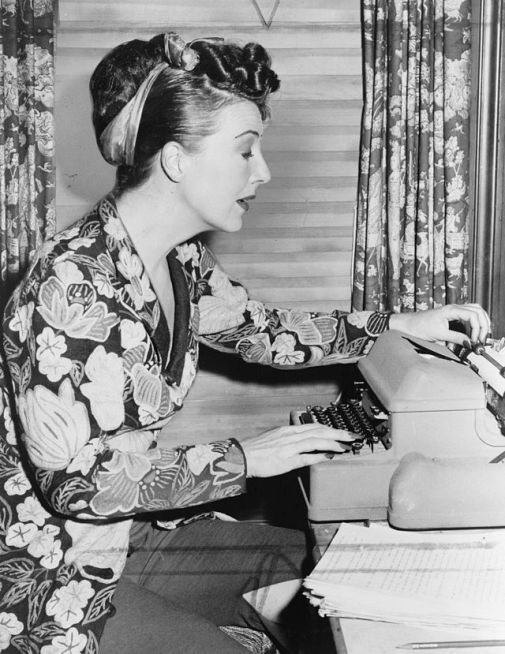 The performer with stage name Gypsy Rose Lee was born in Seattle, Washington, on February 9, 1911, as Rose Louise Hovick. She died of lung cancer in Los Angeles in 1970. June Havoc was her only full sibling.

In response to a request from Gypsy Rose Lee for a “more dignified” way to refer to her profession, and trying to describe what she was (a “high-class” stripper), H. L. Mencken coined the word “ecdysiast” – from “ecdysis”, meaning “to molt”. 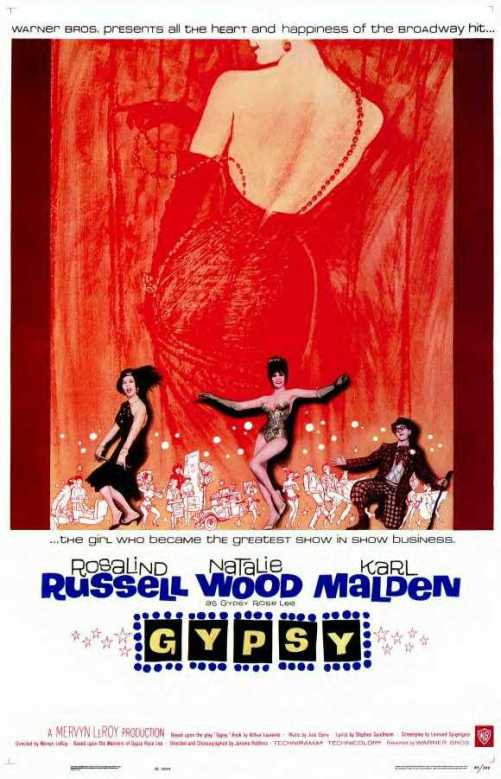 She was also an actress, author, and playwright whose 1957 memoir was made into the stage musical (Gypsy: A Musical Fable by Arthur Laurents) and film Gypsy (Mervyn LeRoy, 1962) starring Rosalind Russell, Natalie Wood and Karl Malden.

While she worked at Minsky’s Burlesque, Gypsy Rose Lee had relationships with an assortment of characters, from comedian Rags Ragland to Eddy Bruns. In Hollywood, she married Arnold “Bob” Mizzy on August 25, 1937, at the insistence of the film studio. Gypsy was at one time in love with Michael Todd and in 1942, in an attempt to make him jealous, she married William Alexander Kirkland; they divorced in 1944. While married to Kirkland, she gave birth on December 11, 1944, to a son fathered by Otto Preminger; he was named Erik Lee and has been known successively as Erik Kirkland, Erik de Diego, and Erik Preminger. Gypsy Lee was married for a third time in 1948, to Julio de Diego, but they also eventually divorced.

The walls of her Los Angeles home were adorned with pictures by Joan Miró, Pablo Picasso, Marc Chagall, Max Ernst, and Dorothea Tanning, all of which were reportedly gifts to her by the artists themselves. Like Picasso, she was a supporter of the Popular Front movement in the Spanish Civil War and raised money for charity to alleviate the suffering of Spanish children during the conflict. “She became politically active, and supported Spanish Loyalists during Spain’s Civil War.

“And yet, despite the ultimate and monumental success of the tour, things did not always go smoothly. The trouble was not so much from within the group (though there were instances of stress and friction, granted) but from the outsiders: tourist-types, music-lovers, hero-worshippers, souvenir-hunters, run-away-teenies, young ill-informed musicians hoping to replace guitarist Mick Taylor who had recently left the group, and quite unaware, of course, that inside the house, at that very moment, the great Ron Wood was picking a line that would have set Bo Didddley’s top a ‘tappin’!”

This was The Rolling Stones‘ first tour with new guitarist Ronnie Wood, after Mick Taylor had left the band. (A 14 April announcement merely said he would be playing on the tour; he was not officially named a Rolling Stone until 19 December 1975). Long time sidemen Bobby Keys and Jim Price on brass were not featured on this tour, being replaced by Billy Preston on keyboards and Ollie E. Brown on percussion. Bobby Keys made a guest appearance on You Can’t Always Get What You Want and Brown Sugar at the Los Angeles shows.

The Tour of the Americas ’75 was not tied to support of any newly released material, as it began more than seven months after the release of their last studio album at the time, It’s Only Rock’n Roll; therefore the compilation album Made in the Shade was released to capitalise on the tour’s publicity.

The mid-1970s were the era of extravagant stage shows, from the likes of Elton John, Alice Cooper, Kiss, and Queen—a new format for the Stones, with their usual act freshly aided by theatrical stage props and gimmicks, including a giant inflatable phallus (nicknamed ‘Tired Grandfather’ by the band, since it sometimes malfunctioned) and, at some shows, an unfolding lotus flower-shaped stage that Charlie Watts had conceived. 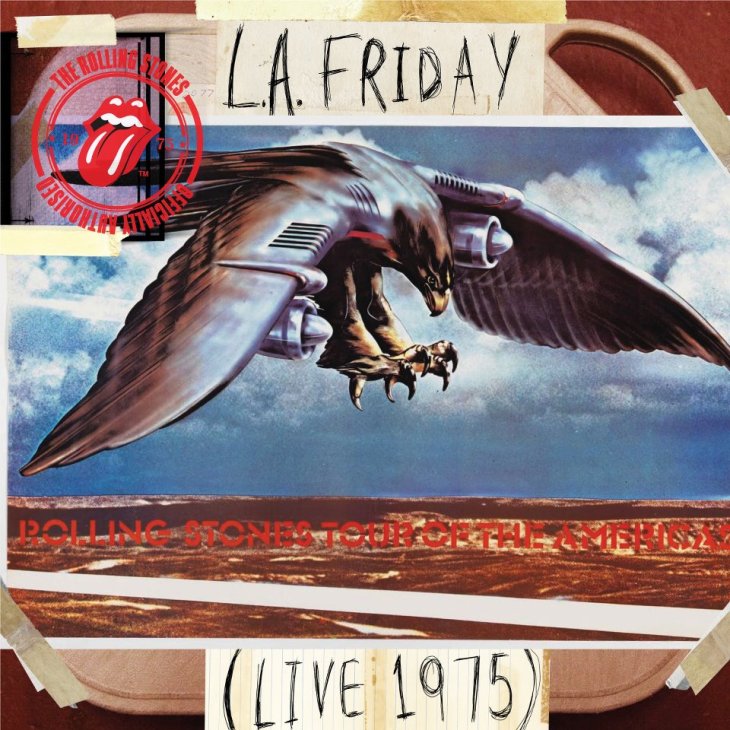 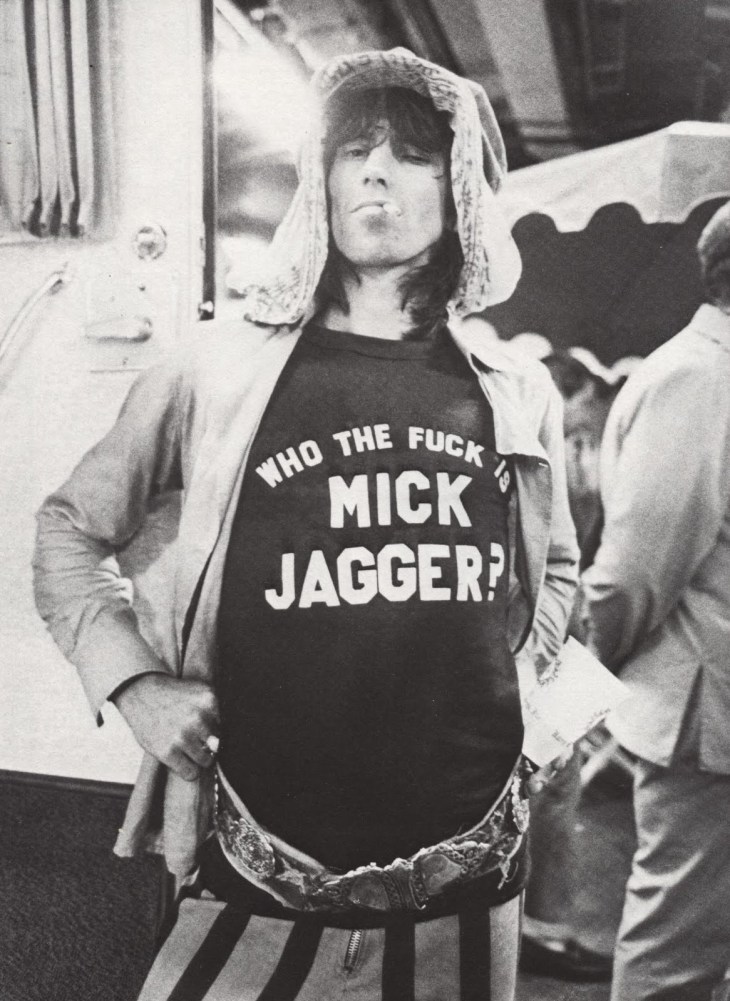 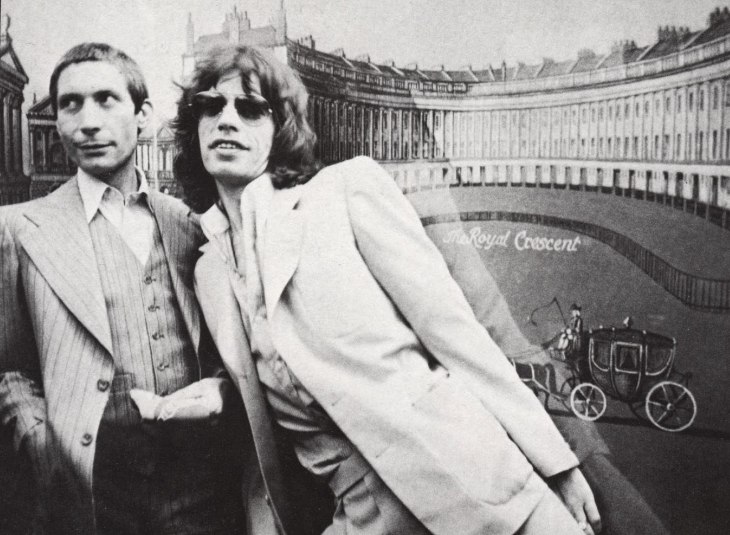 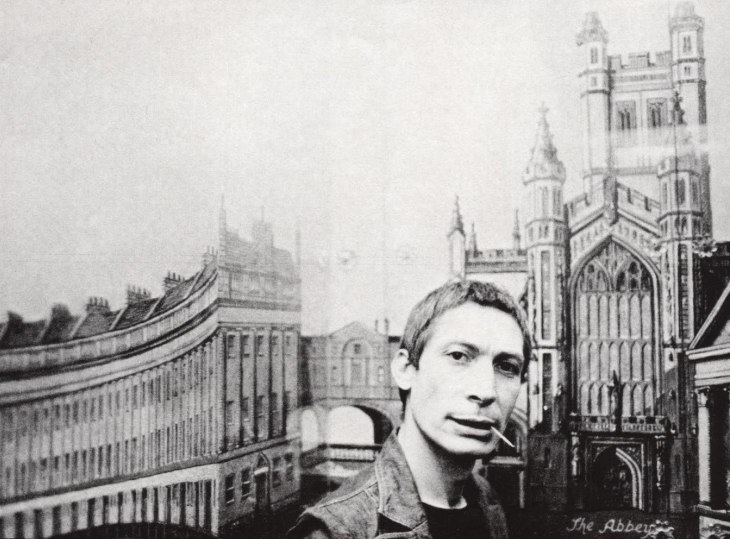 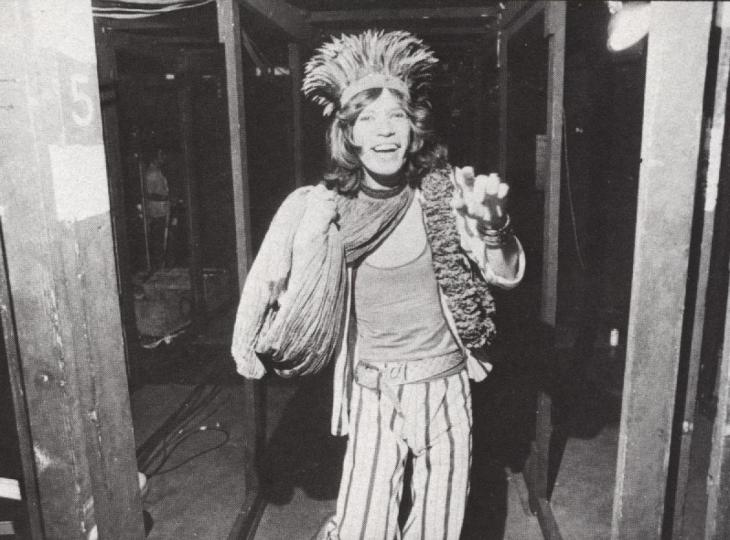 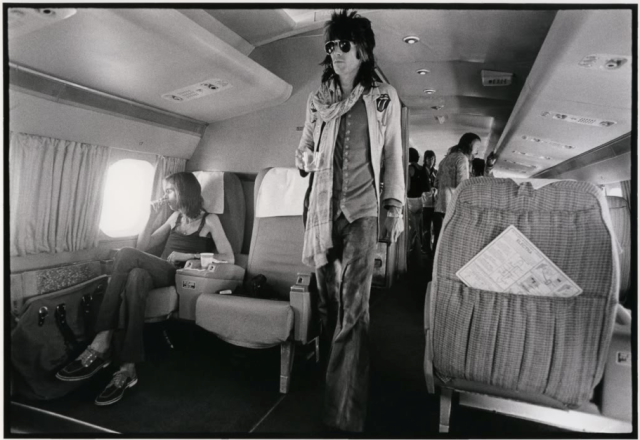 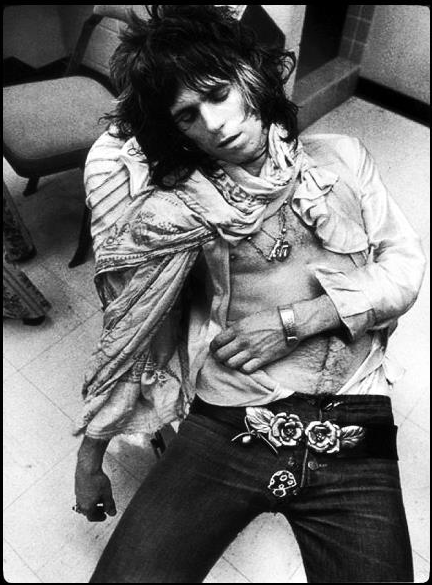 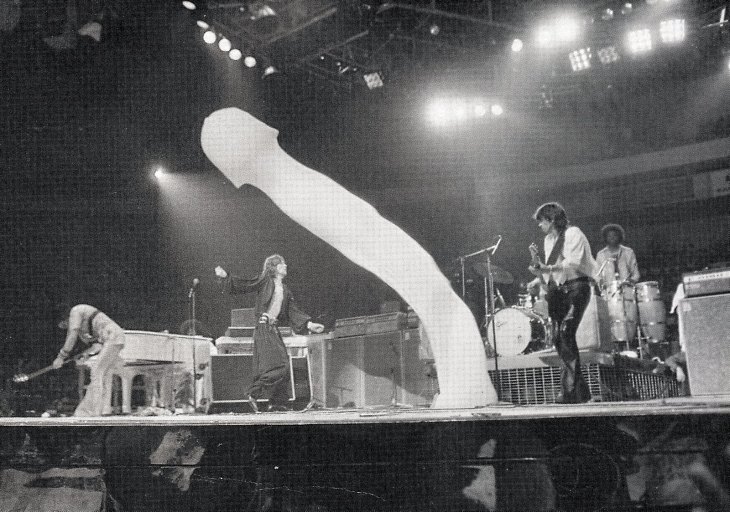 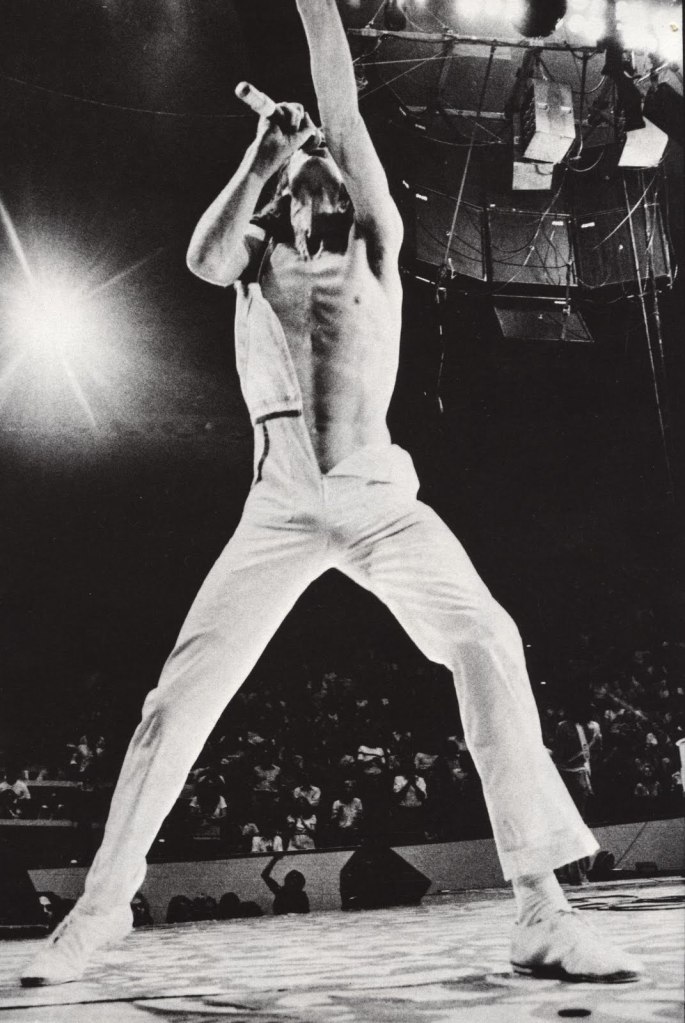 The Rolling Stones’ Tour of The Americas, 1975. Pictures by Annie Leibovitz and Christopher Simon Sykes 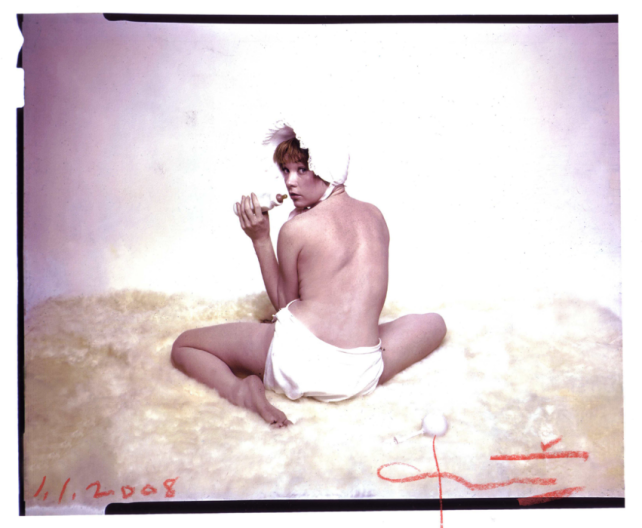 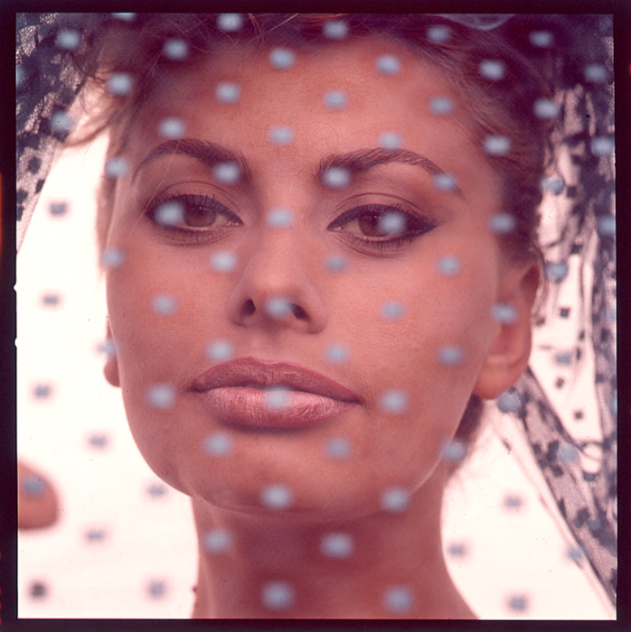