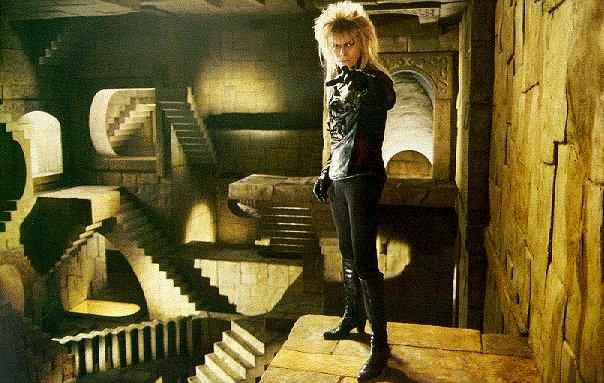 To watch the movie clip, please take a gander at The Genealogy of Style‘s Facebook page: https://www.facebook.com/pages/The-Genealogy-of-Style/597542157001228?ref=hl

The tagline is “Be unexpected.” The fragrance created by perfumer Jacques Polge debuted on fall 2010 preceded by a media campaign which include the short advertisement “Bleu de Chanel” by Martin Scorsese featuring French actor Gaspard Ulliel. Prior to Scorsese, Baz Luhrmann had worked on Chanel No. 5.

The Rolling Stones‘ She Said Yeah, from band’s 1965 album December’s Children (And Everybody’s),  propels the script of the short film, in which rising international star Gaspard Ulliel plays the role of a young actor whose artistic talent, rebelliousness and good fortune have thrown him into the public eye. However, he refuses to conform to the lifestyle and expectations his newly found fame has placed upon him. As he struggles with new pressures and expectations, he runs into his first love, who for years, supplied him with the passion and turmoil that fueled his work. Faced with a decision, he pushes aside convention to embody the bold energy and elegance of Bleu De Chanel by daring to be unpredictable and refusing to bow down to convention. Scorsese had directed the 2008 Rolling Stones concert film Shine A Light.

The song She Said Yeah was recorded by the group in September of 1965 at RCA Studios in Hollywood, the very same place where the band’s anthem (I Can’t Get No) Satisfaction had been recorded a few months earlier. She Said Yeah was written by the late Sonny Bono and West Coast rockabilly performer Roddy Jackson, and had been a single for Larry Williams in the late 1950s. Williams became known with such early rock ‘n’ roll hits as Bony Maronie, Dizzy Miss Lizzy and Slow Down, the last two of which were covered by The Beatles.

Still from Mishima, a Life in Four Chapters (Paul Schrader, 1984) 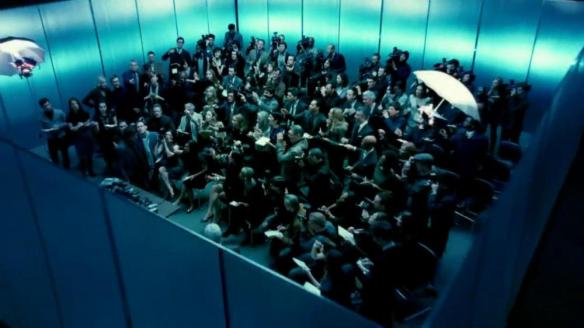 Still from short advertisement “Bleu de Chanel” (Martin Scorsese, 2010). The exploding screen wall seems to be inspired by Ishioka’s set design for Mishima. “We knew the old Hollywood system was gone, so we thought we could get in the cracks somehow. Francis was already at it — he was the big brother…”, Scorsese said about starting out with his friends George Lucas, Steven Spielberg and Francis Ford Coppola. Rolling Stone Magazine 40th Anniversary (2007) 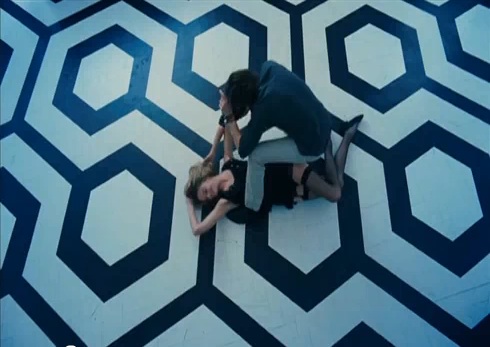 Gaspar Ulliel taking pictures to the woman he was chasing. This scene reminds the famous photo-shoot played by David Hemmings and  sixties model Veruschka in Blown-Up. In a piece called, The Man Who Set Film Free, Scorsese wrote about the sensation of seeing the Italian director’s L’Avventura for the first time, almost 50 years ago.

Never before Eiko Ishioka had worked as a film production designer, but at Cannes she received a best artistic contribution prize, along with the film’s cinematographer, John Bailey, and its composer, Philip Glass. Ishioka, whose late father was a noted pioneering graphic designer, combined a free, ever-questing imagination with traditional Japanese diligence. “He (Paul Schrader) gave me the second-draft scenario to read, and basically the structure of the movie seemed fresh for me,” said Ishioka.

Ishioka and George Lucas, executive producer of the movie

“I asked him two questions before I decided to do the film. I asked him, ‘Why do you need me as an artist for your movie?’ Then I said that I wasn’t a fanatic fan for Mishima, that I was like an ordinary Japanese audience for Mishima: ‘Is this OK?–It means I’m not an expert on Mishima.’

“He said that this movie was to be made in a very innovative style. He had tried to find a production designer in America but decided he wanted to choose someone outside the film field. He wanted a fresh concept. I told him that I didn’t have enough knowledge of technology for the job. He said it was not so difficult to find technical people–‘We can find find someone to help you as a partner.’

Ishioka gave her final decision only after Schrader selected veteran art director Kazuo Takenaka as her partner. “It was like an arranged marriage,” she said. “If one of us doesn’t want to work with the other, then we have an out. Takenaka wanted to work on the realistic and documentary parts of the film, and I wanted to work on the novels. But he has his pride; he’s an older man and wanted to be more than just a partner. I understood that.” (Takenaka’s credit reads executive art director.

At first, after intensive discussions with Schrader, Ishioka was intent on carrying out his ideas, but Takenaka told her that she must have her own concept. ” ‘Don’t worry about describing Schrader’s images,’ he told me. It was very strong, very important advice. I was so shocked, but it opened my eyes, my mind–my spirit. Paul said, ‘OK, try it.’ 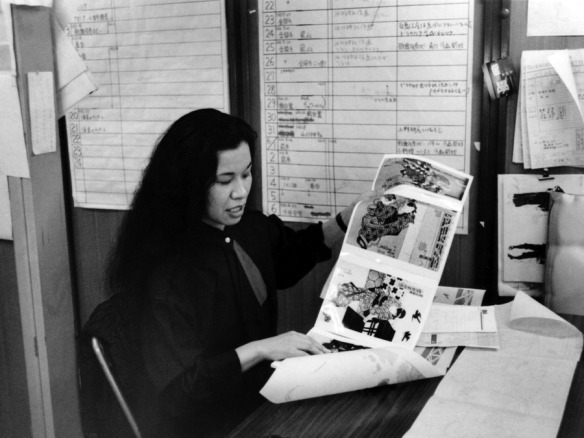 Eiko at her desk reviewing classic woodblock prints for Mishima

“My concept was built from the three novels, not from the scenario,” said Ishioka, who was soon turning out scores of sketches. “I wanted to do a big presentation. I told Paul, ‘If you don’t like it, there is no meaning for me to continue.’ I built a model for ‘The Temple of the Golden Pavilion’ at 1/50th scale. Then there were many, many discussions with Schrader and Bailey–talk, talk; talk many, many times.”

Into this project Ishioka said she poured her “body and spirit. Almost 20 years as a graphic designer and art director, a designer in the theater, publishing, advertising and designing corporate identities.

Although Takenaka did much of the rest of the picture, Ishioka had the overall responsibility as production designer and was deeply involved in re-creating Mishima’s Western-style home, which was cluttered with European and American reproduction kitsch. 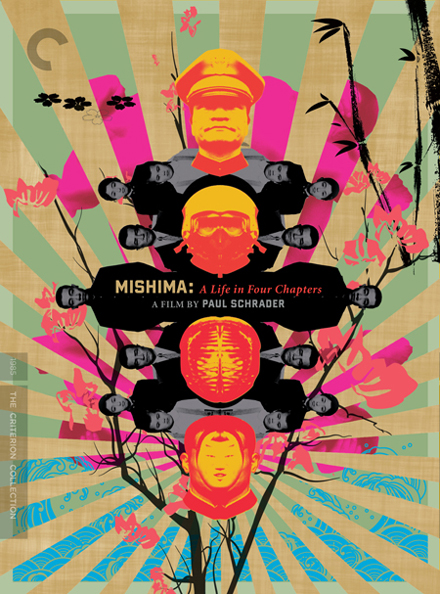 Mishima: A Life in Four Chapters is an American/Japanese film co-written and directed by Paul Schrader in 1985. Francis Ford Coppola and George Lucas served as executive producers. As the title indicates, Mishima is divided into four chapters, each encapsulating a different aspect of the man’s spirit, three of which include condensed adaptations of his most famous novels. The film is based on the life and work of Japanese writer Yukio Mishima, interweaving episodes from his life with dramatizations of segments from his books The Temple of the Golden Pavilion, Kyoko’s House, and Runaway Horses. 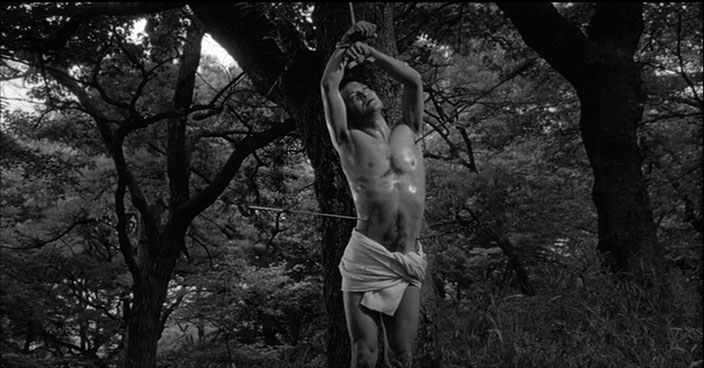 Although Mishima only visualizes three of the writer’s novels by name, the film also uses segments from his autobiographical novel Confessions of a Mask. At least two scenes, showing the young Mishima being aroused by a painting of the Christian martyr Sebastian, and his secret love for a fellow pupil at school, also appear in this book. The use of one further Mishima novel, Forbidden Colors, which describes the marriage of a homosexual man to a woman, was denied by Mishima’s widow.

The film sets in on November 25, 1970, the last day in Mishima’s life. He is shown finishing a manuscript. Then, he puts on a uniform he designed for himself and meets with four of his most loyal followers from his private army.

As Schrader wanted to visualize a book illustrating Mishima’s narcissism and sexual ambiguity, he chose the novel Kyoko’s House (which Mishima had translated for him exclusively) instead. Kyoko’s House contains four equally ranking storylines, featuring four different protagonists, but Schrader picked out only the one which he considered convenient.

Mishima uses different colour palettes to differentiate between frame story, flashbacks and scenes from Mishima’s novels: The (1970) contemporary scenes are shot in subdued colours, the flashbacks in black-and-white, the The Temple of the Golden Pavilion-episode is dominated by golden and green, Kyoko’s House by pink and grey, and Runaway Horses by orange and black.

Schrader considers Mishima the best film he has directed. “It’s the one I’d stand by – as a screenwriter it’s Taxi Driver (Martin Scorsese, 1976), but as a director it’s Mishima.” 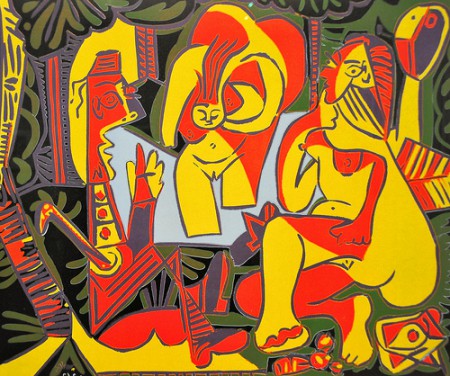 Manet’s painting inspired Picasso to a cycle of 27 paintings, 140 drawings, 3 linogravures and cardboard marquettes for sculpture carried out between 1949 and 1962 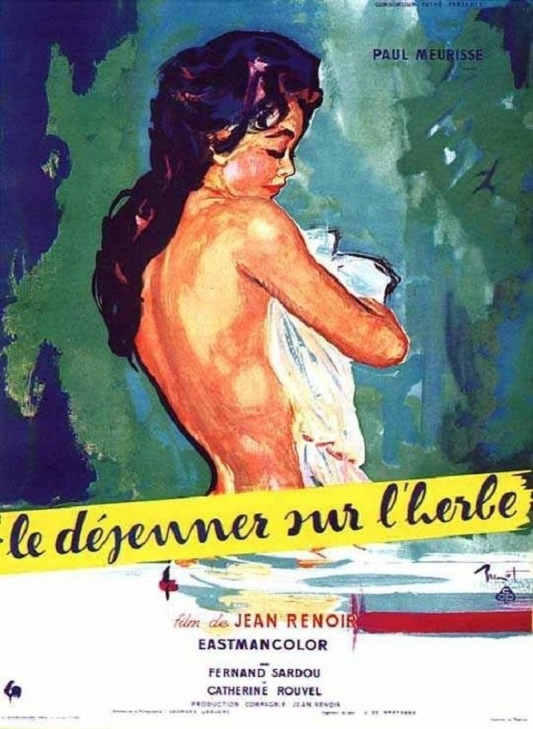 See Jungle! See Jungle! Go Join Your Gang, Yeah! City All Over, Go Ape Crazy! (1981) is the second studio album by pop rock group Bow Wow Wow. The album was the first release by the group to chart, at #192 on the Billboard 200. Posing nude is lead singer Annabella Lwin, who was fifteen at the time of the album’s release. The Andy Earl cover caused outrage that led to an investigation by Scotland Yard, instigated by Lwin’s mother and never appeared on UK and US releases.

Still from The Simpsons 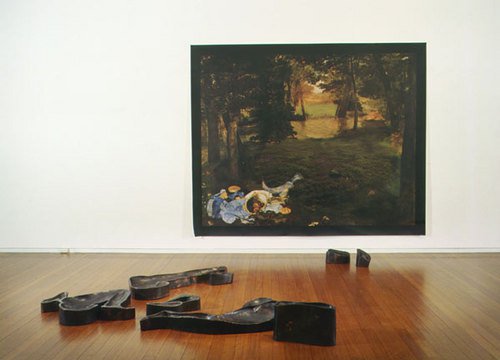 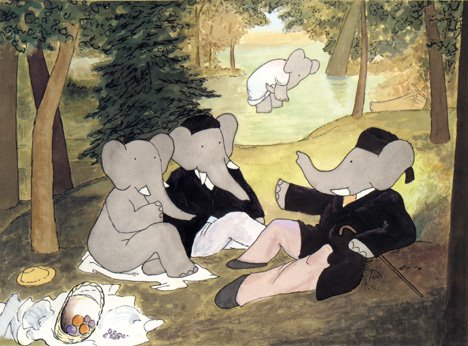