The title character from the cover of Lucifer #16, artist Christopher Moeller.

Lucifer Morningstar is a DC Comics character appearing primarily as a supporting character in the comic book series The Sandman and as the title character of a spin-off, both published under the Vertigo imprint.

Though various depictions of Lucifer – the Biblical fallen angel and Devil of the Abrahamic religions – have been presented by DC Comics in their run, this interpretation by Neil Gaiman debuted in The Sandman in 1989.

In the earlier related series The Sandman, written by Neil Gaiman, Lucifer abandoned his lordship over Hell. While Lucifer had previously appeared in various stereotypical guises in earlier DC books, Gaiman’s version was premised on English poet and prose writer John Milton‘s Paradise Lost (at Gaiman’s request of the artist, Lucifer looks like David Bowie at the time).

Steel engraving for frontispiece to the revised edition of Frankenstein by Mary Shelley, published by Colburn and Bentley, London 1831. The novel was first published in 1818.Illustration by Theodor von Holst.

Frankenstein’s monster finds Goethe’s Werther in a leather portmanteau, along with two others—Plutarch’s Lives of the Noble Greeks and Romans, and Milton’s Paradise Lost. He sees Werther’s case as similar to his own. He, like Werther, was rejected by those he loved.

…”And Ladies of th’ Hesperides, that seem’d

By Knights of Logres, or of Lyones,

Lancelot or Pelleas, or Pellenore,

And all the while Harmonious Airs were heard

Of chiming strings, or charming pipes and winds

From their soft wings, and Flora’s earliest smells.

Such was the Splendour, and the Tempter now

What doubts the Son of God to sit and eat?

These are not Fruits forbidden, no interdict

Defends the touching of these viands pure,

Thir taste no knowledge works, at least of evil,

Paradise Regained is connected by name to John Milton’s earlier and more famous epic poem Paradise Lost, with which it shares similar theological themes; indeed, its title, its use of blank verse, and its progression through Christian history recall the earlier work. However, this effort deals primarily with the temptation of Christ as recounted in the Gospel of Luke.

One major concept emphasized throughout Paradise Regained is the idea of reversals. As implied by its title, Milton sets out to reverse the “loss” of Paradise. Thus, antonyms are often found next to each other, reinforcing the idea that everything that was lost in the first epic will be regained by the end of this “brief epic.” Additionally, the work focuses on the idea of “hunger”, both in a literal and in a spiritual sense.

There are twelve plates in each of the Paradise Lost sets, one for each of the books in the poem. While some of these, such as Satan, Sin and Death: Satan Comes to the Gates of Hell, depict specific scenes from the epic; others, such as Satan Watching the Endearments of Adam and Eve, are syntheses of several scenes. In the latter case, Blake employed visual barriers to separate the elements from different scenes, such as the arc of the bower in Satan Watching the Endearments of Adam and Eve.

In Blake’s mythology, Albion’s fall from a divine androgyny to a sexual nature divides him into the Four Zoas, their spectres (representative of hypocritical morality), and their emanations (female halves). In the Paradise Lost illustrations, Adam is analogous to the fallen Albion, Satan to Adam’s Spectre and Eve to Adam’s emanation. 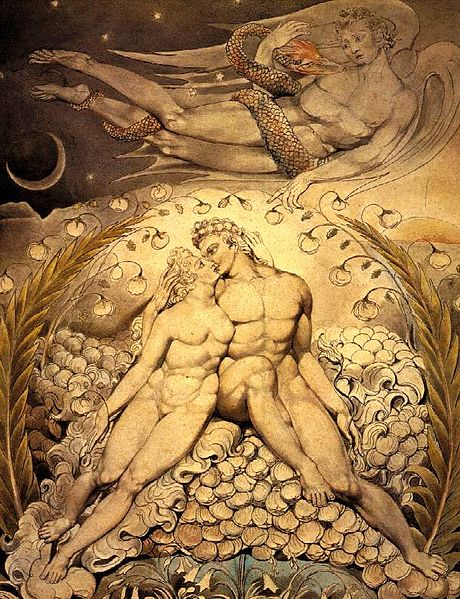 Satan Watching the Endearments of Adam and Eve

The Creation of Eve 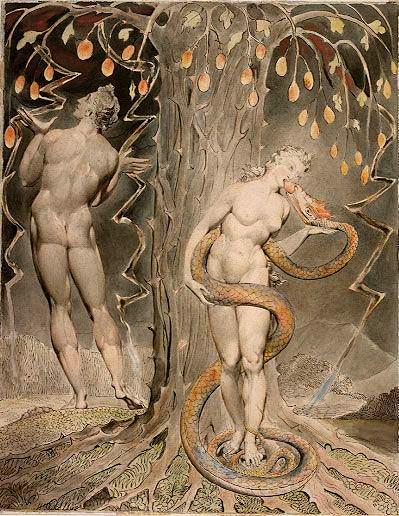 The Temptation and Fall of Eve

The Expulsion of Adam and Eve from the Garden of Eden