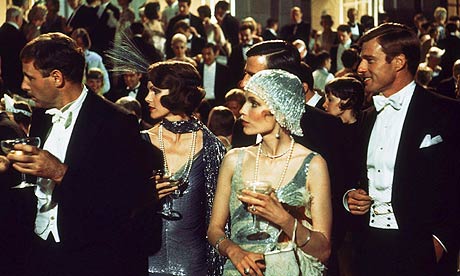 Theoni Aldredge won the Academy Award for Best Costume design in 1974, beating out 3 other Paramount movies.

In The Great Gatsby fashion is almost another protagonist of the story. Francis Scott Fitzgerald depicts every garment worn by Nick Carraway, his cousin Daisy Buchanan, Tom, Daisy’s husband, Jordan Baker, the titular Jay Gatsby and so on the secondary characters. In Fitzgerald’s own words, all the people who attended Gatsby’s parties were always “well dressed”.

Myrtle, the woman who cheated on George Wilson with Tom Buchanan, tells how disappointed she was when discovered Mr. Wilson borrowed “somebody’s best suit” to get married to her in. Later, Myrtle tells why she felt attracted to Tom and started the affair with him: “It was on the two little seats facing each other that are always the last ones left on the train. I was going up to New York to see my sister and spend the night. He had on a dress suit and patent leather shoes, and I couldn’t keep my eyes off him, but every time he looked at me I had to pretend to be looking at the advertisement over his head.”

In this short story every detail in the deco and in fashion counts, it’s almost an essay about style and about the importance of good appearance. It helped Gatsby to get social ascension and wealth. “I saw right away he was a fine-appearing, gentlemanly young man”, said Mr. Wolfsheim, Gatsby’s mentor when he remembered the first time he saw him.

It’s not very distant from Nick Carraway’s first impression about Gatsby: “His tanned skin was drawn attractively tight on his face and his short hair looked as though it were trimmed every day. I could see nothing sinister about him.”

The origin of the word elegance (from Latin elego, to choose) is strongly interrelated not only with our appearance, but our decisions. That’s why the clue that is given by Gatsby’s father about how his son started his determination of getting success is so important.

No wasting time at Shafters or [a name, indecipherable] No more smokeing or chewing Bath every other day Read one improving book or magazine per week Save $5.00 {crossed out} $3.00 per week Be better to parents”

This story is told from a relativist point of view by the narrator, Nick Carraway, a trait he inherited from his father: “Whenever you feel like criticizing any one,” he told me, “just remember that all the people in this world haven’t had the advantages that you’ve had.” 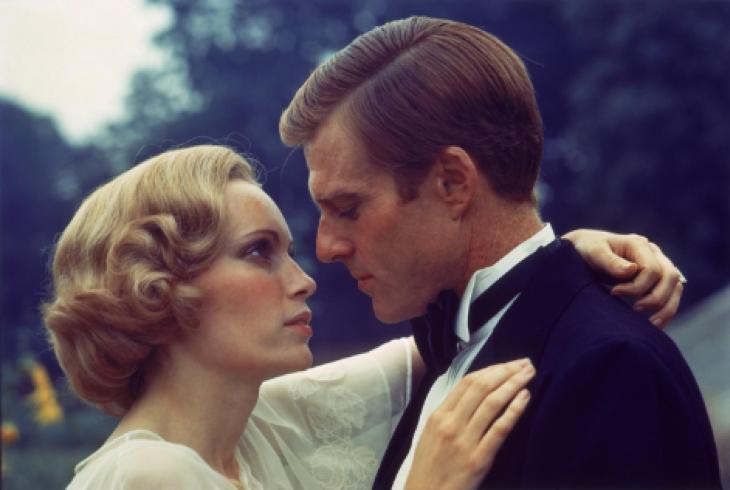 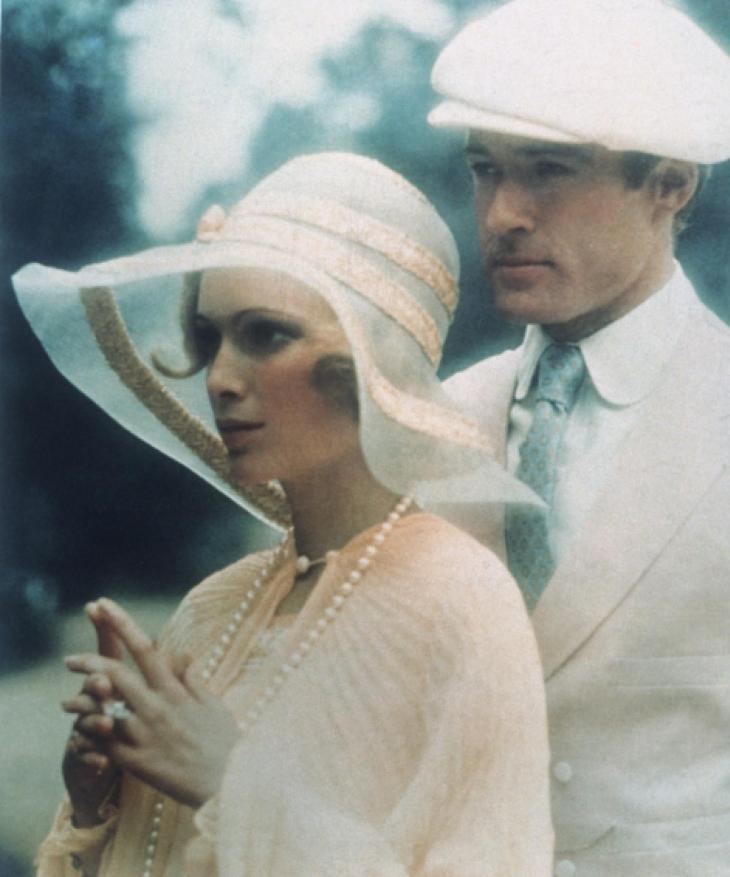 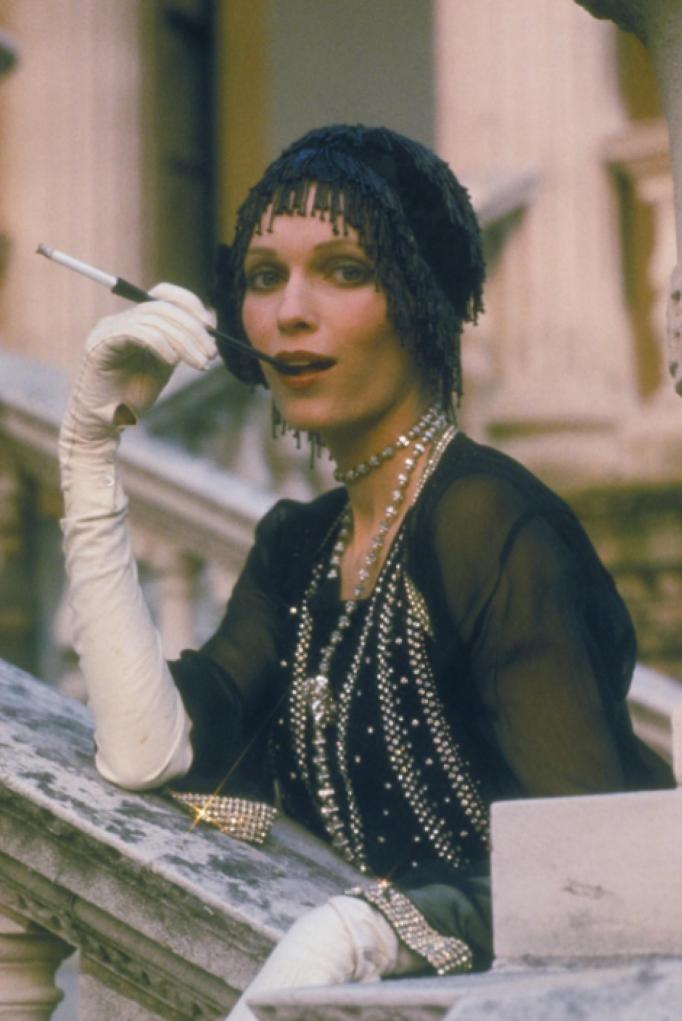 In the novel, we know through Jordan Baker that Daisy used to dress in white when she was younger. Aldredge added  ivory and pale tones and even black into the palette of colors worn by Mia Farrow.

Bruce Dern (as Tom Buchanan), Sam Waterson (as Nick Carraway) and Robert Redford (as Gatsby) in the movie directed by Jack Clayton.

“His bedroom was the simplest room of all — except where the dresser was garnished with a toilet set of pure dull gold.”

“Gatsby, in a white flannel suit, silver shirt, and gold-colored tie”, according to Fitzgerald describes the scene when Gatsby met Daisy again five years after. 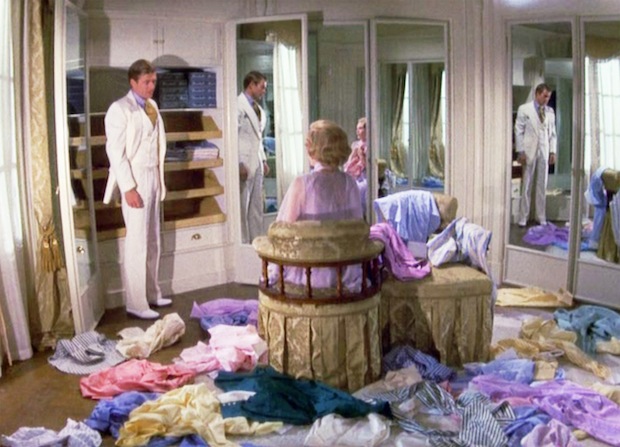 “Recovering himself in a minute he opened for us two hulking patent cabinets which held his massed suits and dressing-gowns and ties, and his shirts, piled like bricks in stacks a dozen high.”

-“I’ve got a man in England who buys me clothes. He sends over a selection of things at the beginning of each season, spring and fall”, said Gatsby.

He took out a pile of shirts and began throwing them, one by one, before us, shirts of sheer linen and thick silk and fine flannel, which lost their folds as they fell and covered the table in many-colored disarray. While we admired he brought more and the soft rich heap mounted higher — shirts with stripes and scrolls and plaids in coral and apple-green and lavender and faint orange, and monograms of Indian blue. Suddenly, with a strained sound, Daisy bent her head into the shirts and began to cry stormily.

“At two o’clock Gatsby put on his bathing-suit and left word with the butler that if any one phoned word was to be brought to him at the pool. He stopped at the garage for a pneumatic mattress that had amused his guests during the summer, and the chauffeur helped him pump it up. Then he gave instructions that the open car wasn’t to be taken out under any circumstances — and this was strange, because the front right fender needed repair.
Gatsby shouldered the mattress and started for the pool.” 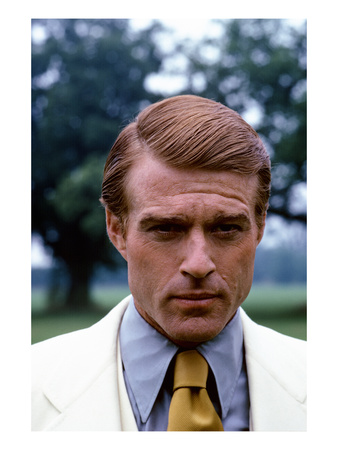 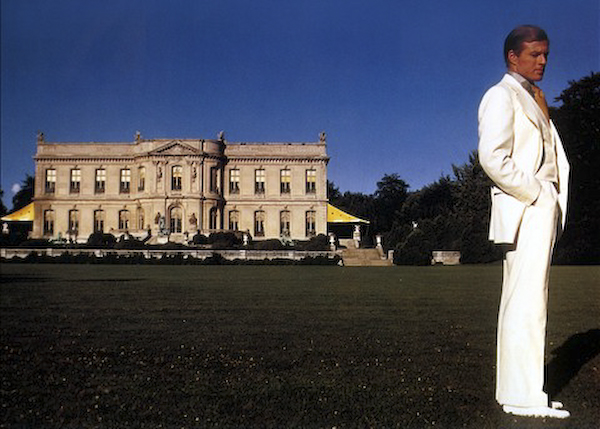