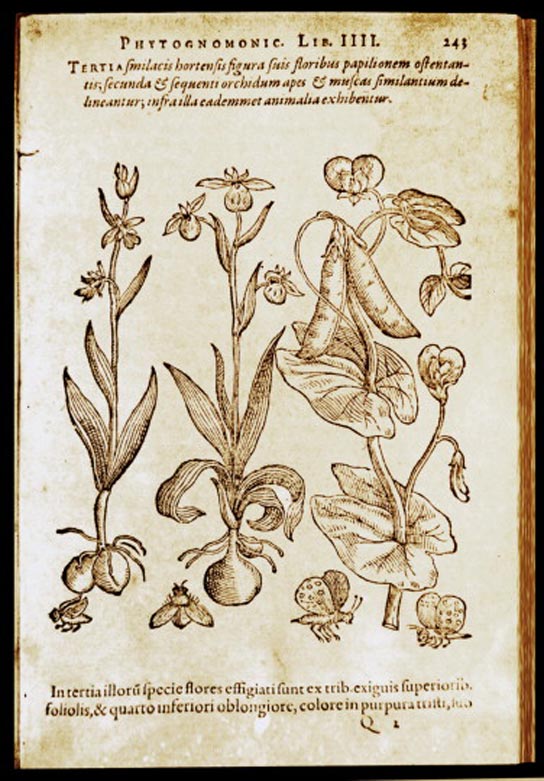 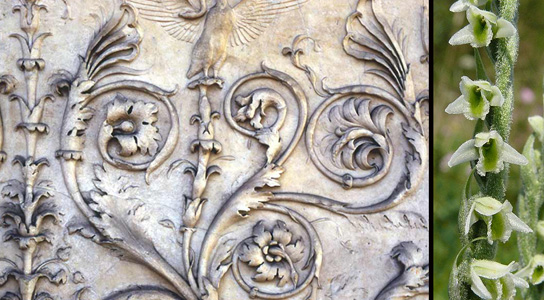 The Ara Pacis, an altar erected in Rome by the emperor Augustus in 9 B.C.E., includes one of the earliest documented depictions of an orchid (inset) in Western art. Credit: Bernd Haynold

Orchidaceae is a diverse and widespread family of flowering plants, with blooms that are often colourful and often fragrant. The type genus (i.e. the genus after which the family is named) is Orchis. The genus name comes from the Ancient Greek ὄρχις (órkhis), literally meaning “testicle”, because of the shape of the twin tubers in some species of Orchis. The term “orchid” was introduced in 1845 by John Lindley in School Botany, as a shortened form of Orchidaceae. All orchids are perennial herbs that lack any permanent woody structure.

The depictions of Italian orchids showed up much earlier than expected. Previously they were spotted in paintings in the 1400s, but Caneva’s team discovered them as early as 46 B.C.E, when Julius Caesar erected the Temple of Venus Genetrix in Rome. There are at least three orchids appearing in dozens of other plants on the Ara Pacis. Artists chose the flowers to emphasize a theme of civic rebirth, fertility and prosperity following a long period of conflict.

As Christianity began to influence art in the 3rd and 4th centuries, orchids and other plants began to fade from public art. This was probably due to an effort to eliminate pagan symbols and those related to sexuality. With the arrival of the Renaissance, orchids arrive back in art, but now mostly as a symbol of beauty and elegance. 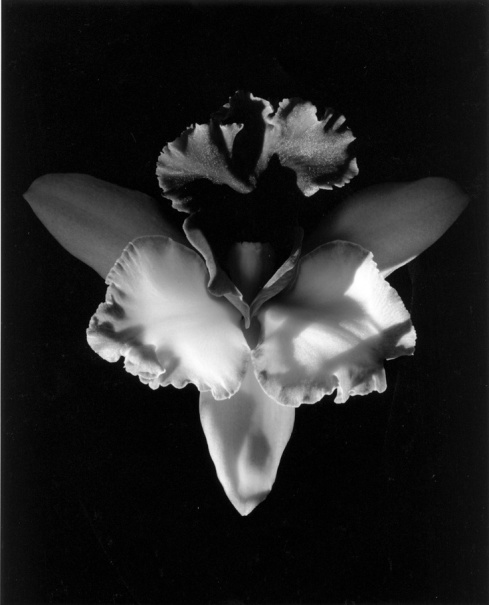 Photograph by Robert Mapplethorpe, circa 1986 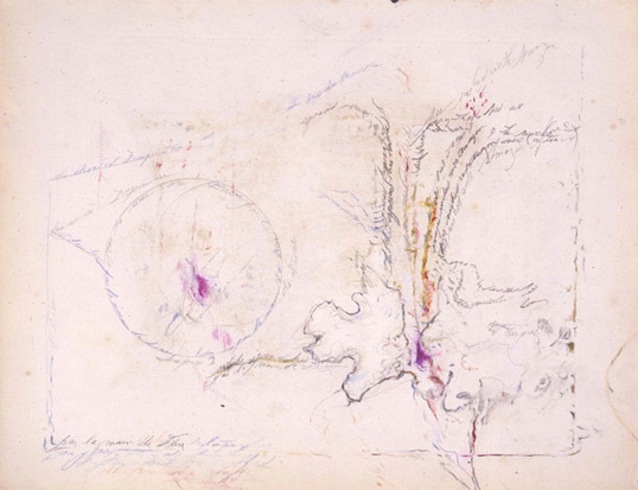 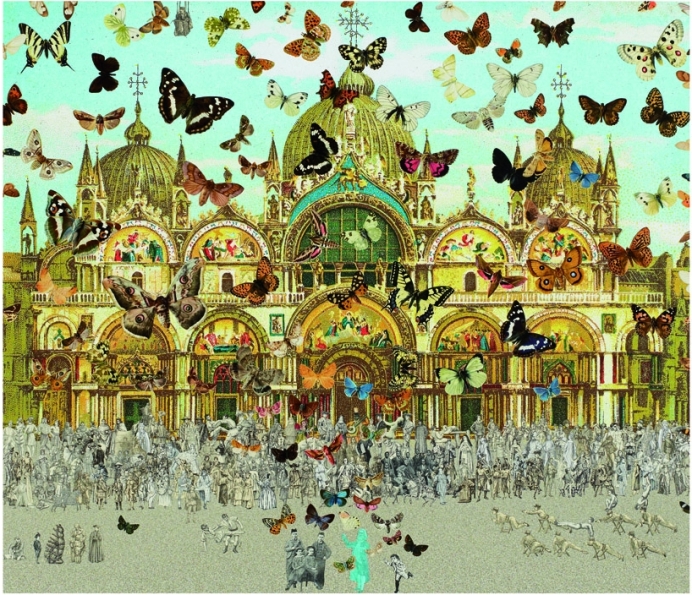 To see a world in a grain of sand
And a heaven in a wild flower,
Hold infinity in the palm of your hand,
And eternity in an hour.

A robin redbreast in a cage
Puts all heaven in a rage.

A dove-house fill’d with doves and pigeons
Shudders hell thro’ all its regions.
A dog starv’d at his master’s gate
Predicts the ruin of the state.

A horse misused upon the road
Calls to heaven for human blood.
Each outcry of the hunted hare
A fibre from the brain does tear.

A skylark wounded in the wing,
A cherubim does cease to sing.
The game-cock clipt and arm’d for fight
Does the rising sun affright.

Every wolf’s and lion’s howl
Raises from hell a human soul.

The wild deer, wand’ring here and there,
Keeps the human soul from care.
The lamb misus’d breeds public strife,
And yet forgives the butcher’s knife.

The bat that flits at close of eve
Has left the brain that won’t believe.
The owl that calls upon the night
Speaks the unbeliever’s fright.

The wanton boy that kills the fly
Shall feel the spider’s enmity.
He who torments the chafer’s sprite
Weaves a bower in endless night.

The caterpillar on the leaf
Repeats to thee thy mother’s grief.
Kill not the moth nor butterfly,
For the last judgement draweth nigh.

He who shall train the horse to war
Shall never pass the polar bar.
The beggar’s dog and widow’s cat,
Feed them and thou wilt grow fat.

The gnat that sings his summer’s song
Poison gets from slander’s tongue.
The poison of the snake and newt
Is the sweat of envy’s foot.

The poison of the honey bee
Is the artist’s jealousy.

The prince’s robes and beggar’s rags
Are toadstools on the miser’s bags.
A truth that’s told with bad intent
Beats all the lies you can invent.

It is right it should be so;
Man was made for joy and woe;
And when this we rightly know,
Thro’ the world we safely go.

Joy and woe are woven fine,
A clothing for the soul divine.
Under every grief and pine
Runs a joy with silken twine.

The babe is more than swaddling bands;
Throughout all these human lands;
Tools were made and born were hands,
Every farmer understands.
Every tear from every eye
Becomes a babe in eternity;

This is caught by females bright,
And return’d to its own delight.
The bleat, the bark, bellow, and roar,
Are waves that beat on heaven’s shore.

The babe that weeps the rod beneath
Writes revenge in realms of death.
The beggar’s rags, fluttering in air,
Does to rags the heavens tear.

The soldier, arm’d with sword and gun,
Palsied strikes the summer’s sun.
The poor man’s farthing is worth more
Than all the gold on Afric’s shore.

One mite wrung from the lab’rer’s hands
Shall buy and sell the miser’s lands;
Or, if protected from on high,
Does that whole nation sell and buy.

He who mocks the infant’s faith
Shall be mock’d in age and death.
He who shall teach the child to doubt
The rotting grave shall ne’er get out.

He who respects the infant’s faith
Triumphs over hell and death.
The child’s toys and the old man’s reasons
Are the fruits of the two seasons.

The questioner, who sits so sly,
Shall never know how to reply.
He who replies to words of doubt
Doth put the light of knowledge out.

The strongest poison ever known
Came from Caesar’s laurel crown.
Nought can deform the human race
Like to the armour’s iron brace.

When gold and gems adorn the plow,
To peaceful arts shall envy bow.
A riddle, or the cricket’s cry,
Is to doubt a fit reply.

The emmet’s inch and eagle’s mile
Make lame philosophy to smile.
He who doubts from what he sees
Will ne’er believe, do what you please.

If the sun and moon should doubt,
They’d immediately go out.
To be in a passion you good may do,
But no good if a passion is in you.

The whore and gambler, by the state
Licensed, build that nation’s fate.
The harlot’s cry from street to street
Shall weave old England’s winding-sheet.

Every night and every morn
Some to misery are born,
Every morn and every night
Some are born to sweet delight.

We are led to believe a lie
When we see not thro’ the eye,
Which was born in a night to perish in a night,
When the soul slept in beams of light.

God appears, and God is light,
To those poor souls who dwell in night;
But does a human form display
To those who dwell in realms of day.

An augury is a sign or omen. Auguries of Innocence is a poem from one of William Blake’s notebooks now known as The Pickering Manuscript. It is assumed to have been written in 1803, but was not published until 1863 in the companion volume to Alexander Gilchrist‘s biography of William Blake. The poem contains a series of paradoxes which speak of innocence juxtaposed with evil and corruption. The poem is 132 lines and has been published with and without breaks that divide the poem into stanzas.

Fresco from Pompei, Casa di Venus, 1st century AD. Dug out in 1960. It is supposed that this fresco could be the Roman copy of famous portrait of Campaspe, mistress of Alexander the Great

Venus is the Roman goddess whose functions encompassed love, beauty, sex, fertility and prosperity. In Roman mythology, she was the mother of the Roman people through her son, Aeneas, who survived the fall of Troy and fled to Italy. Julius Caesar claimed her as his ancestor. The Romans adapted the myths and iconography of her Greek counterpart Aphrodite for Roman art and Latin literature. In the later classical tradition of the West, Venus becomes one of the most widely referenced deities of Greco-Roman mythology as the embodiment of love and sexuality. Aphrodite, perhaps altered after aphrós (ἀφρός) “foam”, stems from the more archaic Cretan Aphordíta and Cypriot Aphorodíta, and was probably ultimately borrowed from Cypriot Phoenician.

In myth, Venus-Aphrodite was born of sea-foam. Roman theology presents Venus as the yielding, watery female principle, essential to the generation and balance of life. Her male counterparts in the Roman pantheon, Vulcan and Mars, are active and fiery. Venus absorbs and tempers the male essence, uniting the opposites of male and female in mutual affection. She is essentially assimilative and benign, and embraces several otherwise quite disparate functions. She can give military victory, sexual success, good fortune and prosperity. In one context, she is a goddess of prostitutes; in another, she turns the hearts of men and women from sexual vice to virtue.

In the most famous version of her myth, her birth was the consequence of a castration: Cronus severed Uranus’ genitals and threw them behind him into the sea. The foam from his genitals gave rise to Aphrodite (hence her name, meaning “foam-arisen”), while the Erinyes (furies), and the Meliae emerged from the drops of his blood. Hesiod states that the genitals “were carried over the sea a long time, and white foam arose from the immortal flesh; with it a girl grew.” The girl, Aphrodite, floated ashore on a scallop shell. This iconic representation of Aphrodite as a mature “Venus rising from the sea” (Venus Anadyomene) was made famous in a much-admired painting by Apelles, now lost, but described in the Natural History of Pliny the Elder. 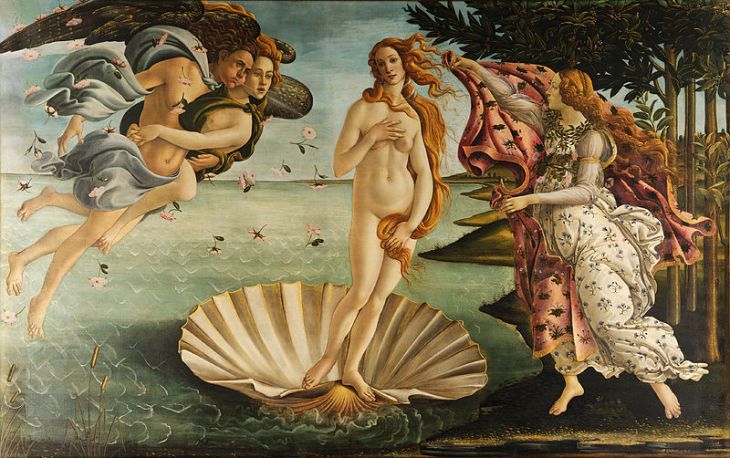 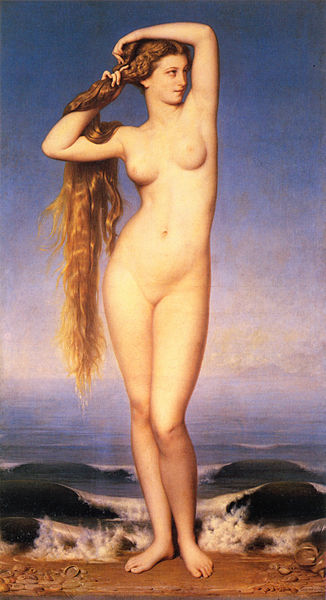 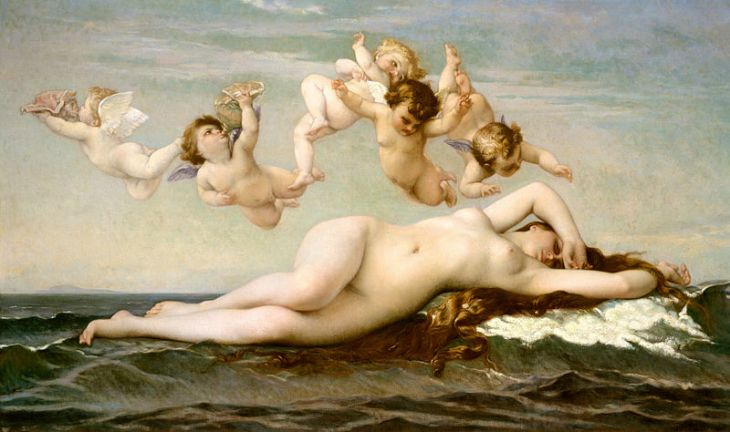 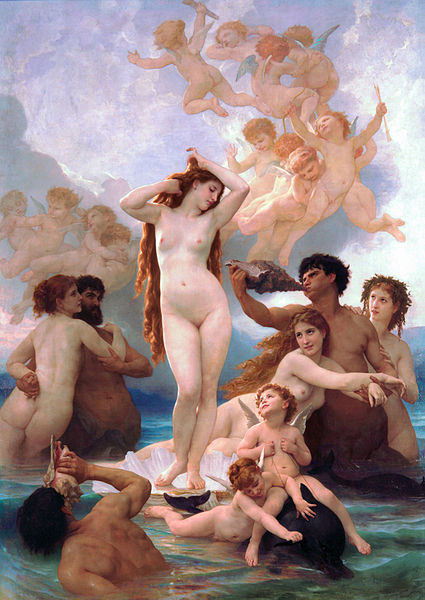 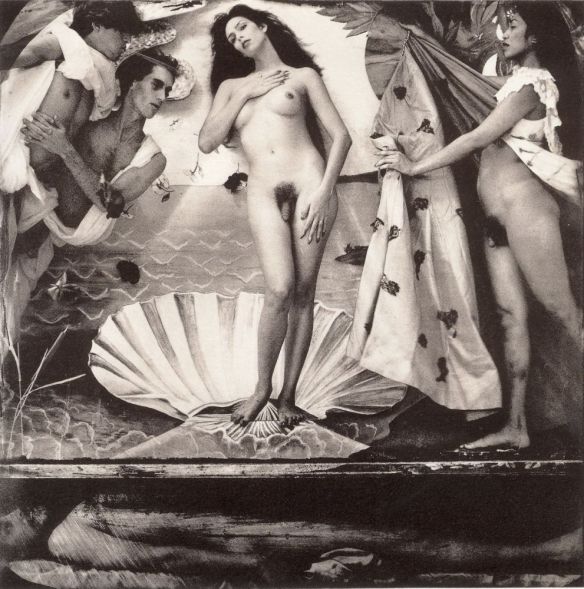 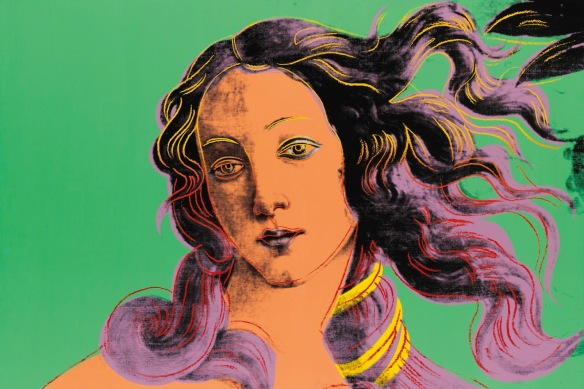 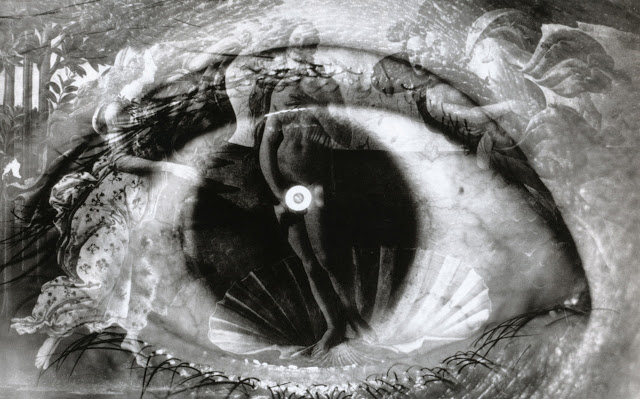 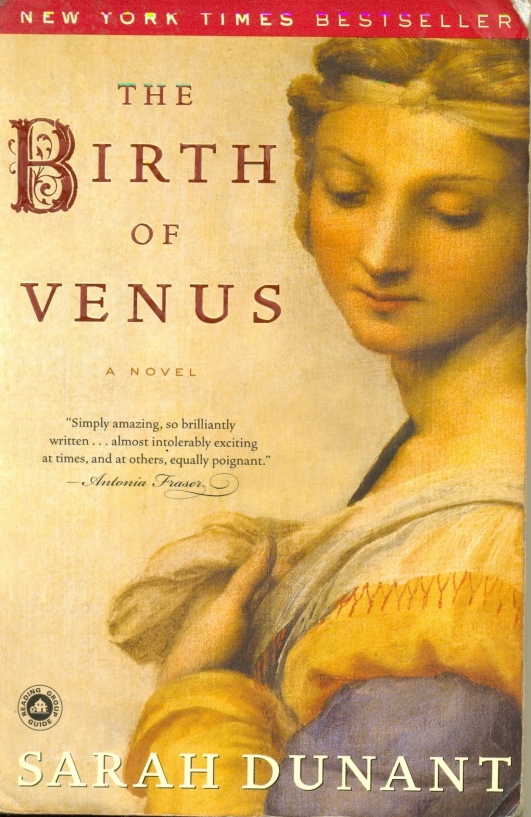 2003 novel by Sarah Dunant. The story is set in the late 15th century in Florence, Italy. It features a young Florentine girl, Alessandra Cecchi, who is drawn to a young painter commissioned to paint the family’s chapel walls…