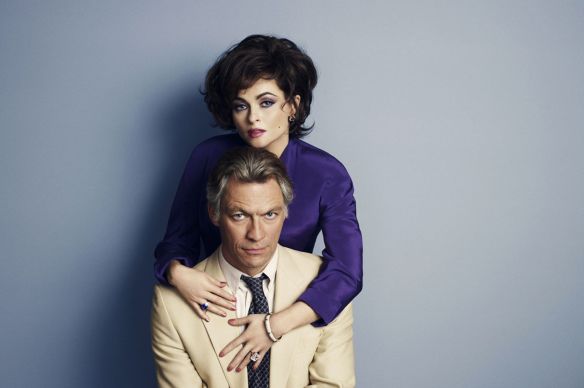 Helena Bonham Carter as Elizabeth Taylor and Dominic West as Richard Burton in “Burton and Taylor” (Richard Laxton, 2013), a BBC film about this legendary couple.

The melancholic Burton and Taylor stars Helena Bonham Carter and Dominic West, and it focuses specifically on a few weeks in 1983 when the two, divorced and in their 50s, reunited professionally to star in Noël Coward’s Private Lives on Broadway.

Eschewing the height of Le Scandale, Burton and Taylor focuses on a quieter, less-sexy, less-triumphant moment in the pair’s love story. They are middle-aged, dancing to disco, not sleeping together, in relationships with other people, ensconced in various addictions, and, as celebrities, well into the trashy phase of their fame, a state of being the staging of Private Lives did nothing to remediate. Private Lives is a comedy about a divorced couple, newly married to other people, who passionately, dysfunctionally fall back into bed together, a tale that, obviously, tracked closely with the real story of Burton and Taylor. (In the play, as in life, the woman Burton left for Taylor was named Sybil.)