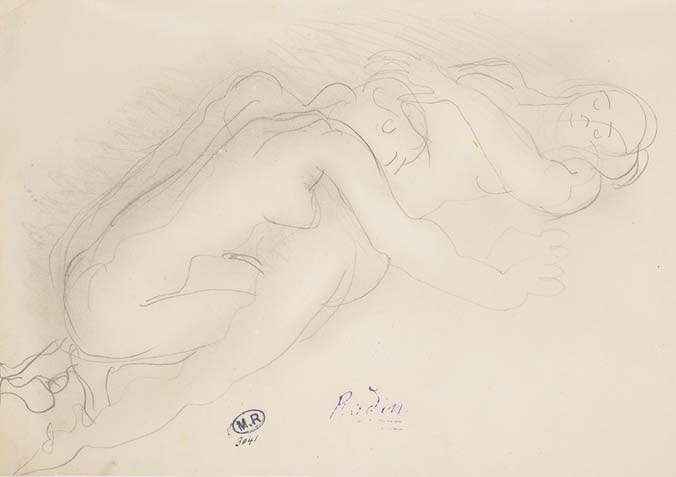 Rodin’s fascination for Sapphic couples, which he shared with Toulouse-Lautrec, Charles Baudelaire, Pierre Louÿs, Paul Verlaine and his predecessor Gustave Courbet, was evident in several of his drawings.

“I am sorry to have to ask you to allow me to mention what everybody declares unmentionable. My justification shall be that we may presently be saddled with the moral responsibility for monstrously severe punishments inflicted not only on persons who have corrupted children, but on others whose conduct, however nasty and ridiculous, has been perfectly within their admitted rights as individuals. To a fully occupied person in normal health, with due opportunities for a healthy social enjoyment, the mere idea of the subject of the threatened prosecutions is so expressively disagreeable as to appear unnatural. But everybody does not find it so. There are among us highly respected citizens who have been expelled from public schools for giving effect to the contrary opinion; and there are hundreds of others who might have been expelled on the same ground had they been found out. Greek philosophers, otherwise of unquestioned virtue, have differed with us on the point. So have soldiers, sailors, convicts, and in fact members of all communities deprived of intercourse with women. A whole series of Balzac’s novels turns upon attachments formed by galley slaves for one another – attachments which are represented as redeeming them from utter savagery. Women, from Sappho onwards, have shown that this appetite is not confined to one sex. Now, I do not believe myself to be the only man in England acquainted with these facts. I strongly protest against any journalist writing, as nine out of ten are at this moment dipping their pens to write, as if he had never heard of such things except as vague and sinister rumors concerning the most corrupt phases in the decadence of Babylon, Greece & Rome. I appeal now to the champions of individual rights to join me in a protest against a law by which two adult men can be sentenced to twenty years penal servitude for a private act, freely consented to & desired by both, which concerns themselves alone. There is absolutely no justification for the law except the old theological one of making the secular arm the instrument of God’s vengeance. It is a survival from that discarded system with its stonings and burnings; and it survives because it is so unpleasant that men are loath to meddle with it even with the object of getting rid of it, lest they should be suspected of acting in their personal interest. We are now free to face with the evil of our relic of Inquisition law, and of the moral cowardice, which prevents our getting rid of it. For my own part, I protest against the principle of the law under which the warrants have been issued; and I hope that no attempt will be made to enforce its outrageous penalties in the case of adult men.”

Letter sent  to an editor of a Newspaper