“Photography records the gamut of feelings written on the human face, the beauty of the earth and skies that man has inherited, and the wealth and confusion man has created. It is a major force in explaining man to man.”

“Every other artist begins with a blank canvas, a piece of paper… the photographer begins with the finished product.” 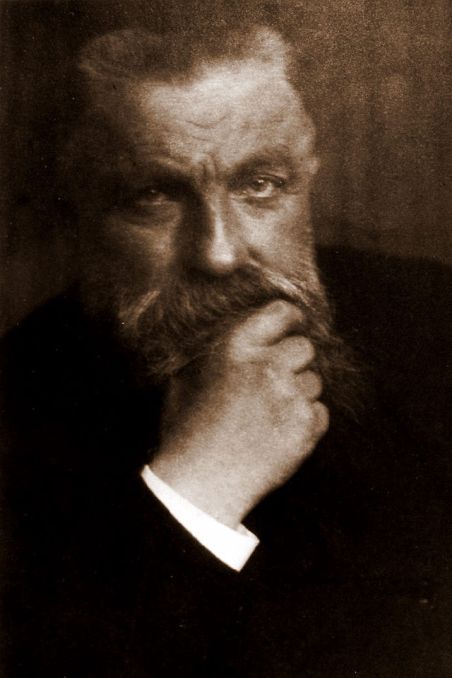 When Edward Steichen arrived in Paris in 1900, Auguste Rodin (1840-1917) was regarded not only as the finest living sculptor but also perhaps as the greatest artist of his time. Steichen visited him in his studio in Meudon in 1901 and Rodin, upon seeing the young photographer’s work, agreed to sit for his portrait. Steichen spent a year studying the sculptor among his works. 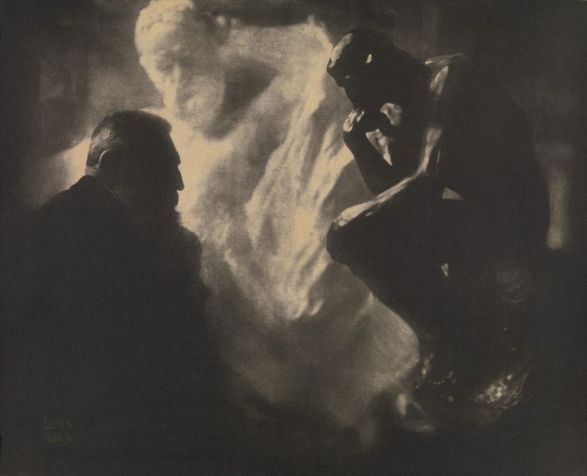 In his autobiography, Edward Steichen describes the studio as being so crowded with marble blocks and works in clay, plaster, and bronze that he could not fit them together with the sculptor into a single negative. He therefore made two exposures, one of Auguste Rodin and the Monument to Victor Hugo, and another of The Thinker. Steichen first printed each image separately and, having mastered the difficulties of combining the two negatives, joined them later into a single picture, printing the negative showing Rodin in reverse.

Rodin–The Thinker is a remarkable demonstration of Steichen’s control of the gum bichromate process and the painterly effects it encouraged. It is also the most ambitious effort of any Pictorialist to emulate art in the grand tradition. The photograph portrays the sculptor in symbiotic relation to his work. Suppressing the texture of the marble and bronze and thus emphasizing the presence of the sculptures as living entities, Steichen was able to assimilate the artist into the heroic world of his creations. Posed in relief against his work, Rodin seems to contemplate in The Thinker his own alter ego, while the luminous figure of Victor Hugo suggests poetic inspiration as the source of his creativity. Recalling his response to a reproduction of Rodin’s Balzac in a Milwaukee newspaper, Steichen noted: “It was not just a statue of a man; it was the very embodiment of a tribute to genius.” Filled with enthusiasm and youthful self-confidence, Steichen wanted in this photograph to pay similar tribute to Rodin’s genius. 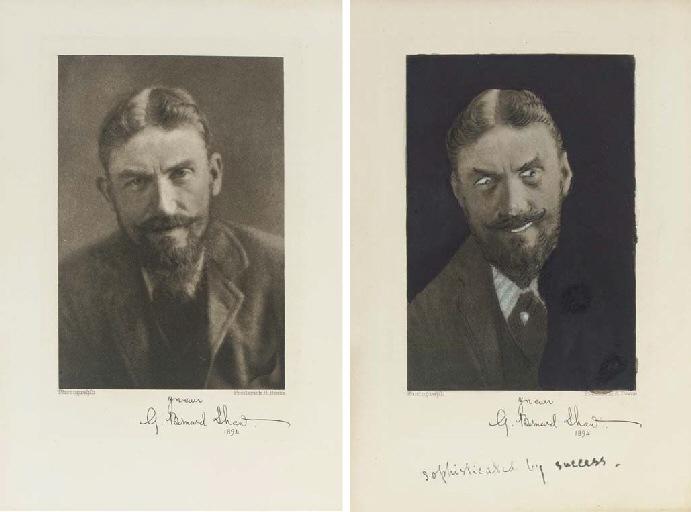 The portraits of Bernard Shaw having been humorously altered in black ink and captioned Max Beerbohn. Beerbohm’s alterations to the portraits transform Shaw into an increasingly demonic figure and are captioned as follows: the frontispiece (after Rodin), “- showing how little, really, one nation can understand another”; the first portrait (unattributed), “awaiting the bugle call of life”; the second portrait (by Frederick H. Evans), “sophisticated* by success”; the third portrait (by Alvin Langdon Coburn), “the last Phase.” Included in the lot is a second, unaltered, copy of the same book.

*In Ancient Greece, σοφία (sophia) was the special insight of poets and prophets. This then became the wisdom of philosophers such as sophists. But their use of rhetoric to win arguments gave sophistication a derogatory quality.