“A few days ago Rodin began the portrait of one of your most remarkable authors, which promises to become something quite extraordinary…” 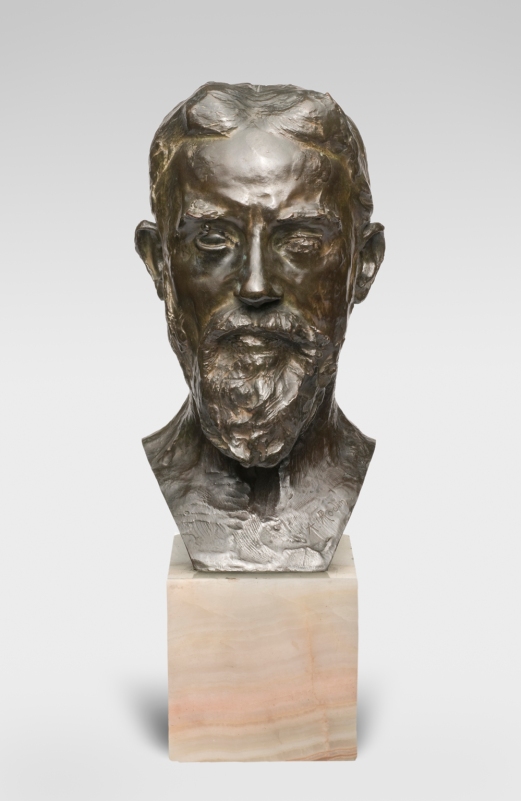 The Irish playwright George Bernard Shaw managed to impress the young Rainer Maria Rilke merely by sitting before the former poet’s idol and master, Auguste Rodin. “He stands excellently,” Rilke gushed in his letters, “with an energy in his keeping still and with such an absolute giving of himself to the hands of the sculptor.” Rainer, though a background figure at the time, and positively Lilliputian in reputation compared to the eminence of Shaw and Rodin, practically flung himself headlong into their graces. That’s not to suggest that he was sycophantic; merely, naturally, that this young Bohemian wanderer was excited to find himself in orbit with two of the century’s greatest minds and hands. “This personality of Shaw’s,” Rilke continues in his letter, “and his whole manner makes me desirous of reading a few more of his books … would sending me a few of his books be justified if I say that I am hoping to write a little thing about him?” 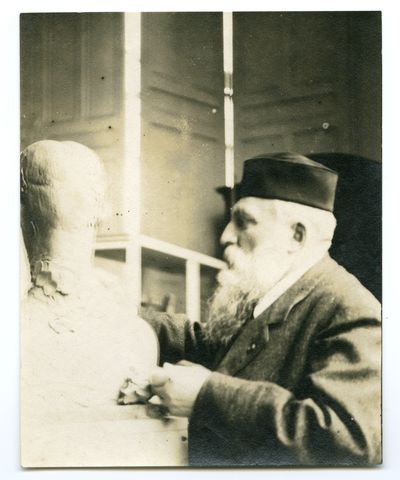 “Rodin had no interests outside his art,” Shaw later said. “He was the most painstaking sculptor I have ever met. I gave something like thirty sittings, in as many consecutive days, at his studio in Meudon. Rodin took a large number of profiles, adjusting my face by a fraction of an inch for each—spinning my head round by degrees. He took an immense number of measurements and made so many pencil marks on the clay that he used up three pencils before the sittings were over … Somewhere near the thirtieth day I asked him when the bust would be finished. ‘Finished?’ he said in surprise; ‘why, I have hardly begun!’”

“Yesterday,” Rilke wrote in a letter dated April 19th, “he seated Shaw in a cunning little child’s armchair (that ironic and by no means uncongenial scoffer was greatly entertained by all this) and cut off the head of the bust with a wire.” Rilke added that, rather than being perturbed by the sight of his effigy being cut into pieces, “Shaw, whom the bust was already remarkably like, in a superior sort of way, watched this decapitation with indescribable joy.”

“Rodin was a passionate collector of pebbles. He would go out to the beach, or into the street, and pick up any pebble presenting in his imagination a resemblance to human features. He also collected large pieces of rock, and for the same reason. At first he accommodated these treasures in glass cases in his own house, then, when the collection grew too big for that, he rented a separate building for them. It was a sign of the highest favour on the part of Rodin to present someone with one such pebble or piece of rock.”
~ George Bernard Shaw.

Shaw continued: “From the clay model he made two casts, one in marble and one in bronze. The bronze one is in my possession, while the marble one is in Dublin. For some unfathomable reason my friends and admirers have covered this marble bust with their pencilled signatures.”

Of Shaw, Rilke concluded that he “is a man who has a very good way of getting along with life, of putting himself into harmony with it … Proud of his works, like Wilde or Whistler, but without their pretentiousness, proud as a dog is proud of his master.” 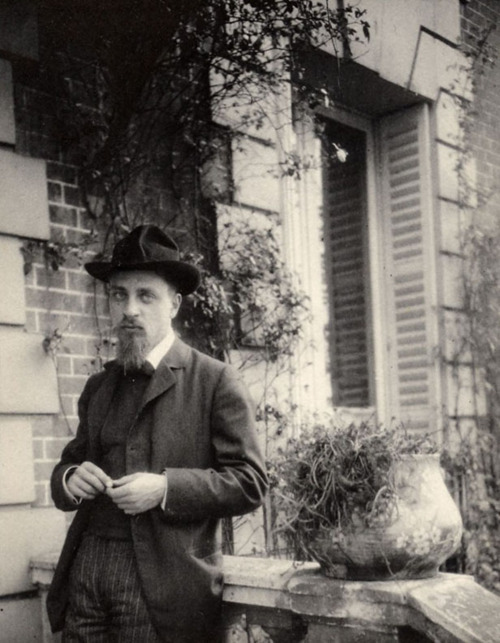 “You who never arrived
in my arms, Beloved, who were lost
from the start,
I don’t even know what songs
would please you. I have given up trying
to recognize you in the surging wave of
the next moment. All the immense
images in me — the far-off, deeply-felt
landscape, cities, towers, and bridges, and
unsuspected turns in the path,
and those powerful lands that were once
pulsing with the life of the gods–
all rise within me to mean
you, who forever elude me.

You, Beloved, who are all
the gardens I have ever gazed at,
longing. An open window
in a country house– , and you almost
stepped out, pensive, to meet me.
Streets that I chanced upon,–
you had just walked down them and vanished.
And sometimes, in a shop, the mirrors
were still dizzy with your presence and,
startled, gave back my too-sudden image.
Who knows? Perhaps the same
bird echoed through both of us
yesterday, separate, in the evening… “

“Though we have hundreds of photographs of [Charles] Dickens and [Richard] Wagner, we see nothing of them except the suits of clothes with their heads sticking out; and what is the use of that?”

“I’ve posed nude for a photographer in the manner of Rodin’s Thinker, but I merely looked constipated.” 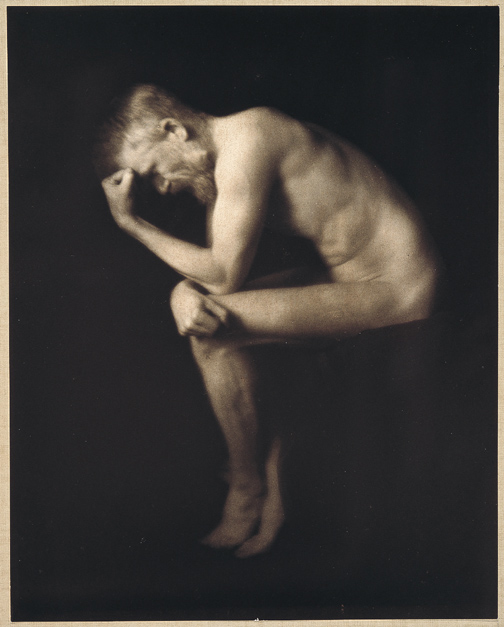 When the photograph was exhibited in the London Salon in 1906, newspaper articles questioned: “The face, the beard, the neck, and the hands are undoubtedly the sole property of Mr. George Bernard Shaw, but we have no authentic knowledge of the rest of the Shavian frame, and the study of the anatomy shows more muscular development than some people would expect of a combination of high thinking and vegetarianism.” 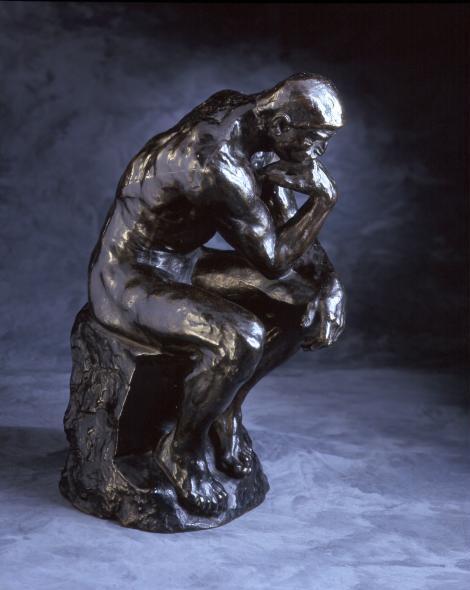 Le Penseur (The Thinker),  by Aguste Rodin. Rodin first conceived the figure as part of another work in 1880, but the first of the familiar monumental bronze castings did not appear until 1904

Le Penseur (The Thinker) is a bronze sculpture by Auguste Rodin, usually placed on a stone pedestal. The work shows a nude male figure of over life-size sitting on a rock with his chin resting on one hand as though deep in thought, and is often used as an image to represent philosophy. 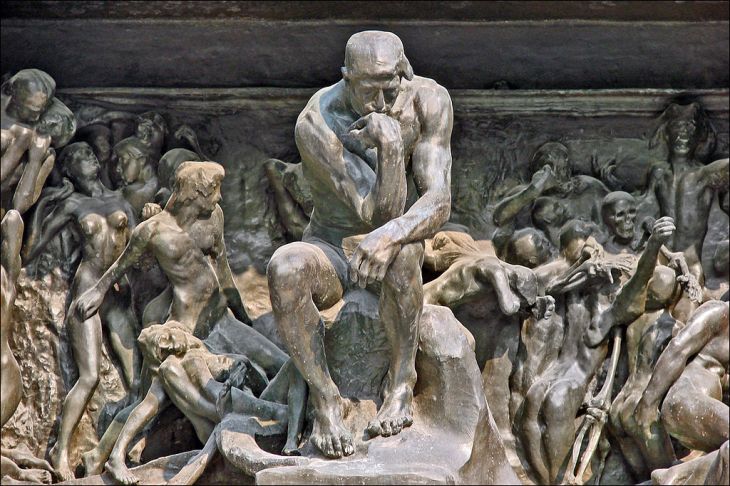 The Thinker in The Gates of Hell at the Musée Rodin

Oginally named Le Poète (The Poet), The Thinker was initially a figure in a large commission, begun in 1880, for a doorway surround called The Gates of Hell. Rodin based this on The Divine Comedy of Dante, and most of the many figures in the work represented the main characters in the epic poem. Some critics believe The Thinker, at the centre of the composition over the doorway and at about 70 cm high larger than most other figures, was originally intended to depict Dante Alighieri at the gates of Hell, pondering his great poem. However, there are questionable aspects to this interpretation, including that the figure is naked, Dante is fully clothed throughout his poem, and that the figure, as used, in no way corresponds to Dante’s effete figure. The sculpture is nude, as Rodin wanted a heroic figure in the tradition of Michelangelo, to represent intellect as well as poetry. 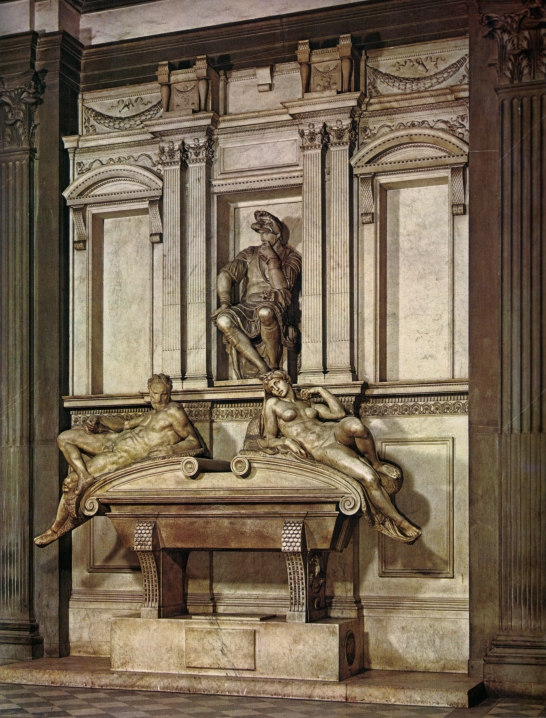 This detail from The Gates of Hell was first named The Thinker by foundry workers, who noted its similarity to Michelangelo’s statue of Lorenzo de Medici called Il Pensieroso (The Thinker). Rodin decided to treat the figure as an independent work, at a larger size. The figure was designed to be seen from below, and is normally displayed on a fairly high plinth, though the heights chosen by the various owners for these vary considerably.