Ever let the Fancy roam,
Pleasure never is at home:
At a touch sweet Pleasure melteth,
Like to bubbles when rain pelteth;
Then let winged Fancy wander
Through the thought still spread beyond her:
Open wide the mind’s cage-door,
She’ll dart forth, and cloudward soar.
O sweet Fancy! let her loose;
Summer’s joys are spoilt by use,
And the enjoying of the Spring
Fades as does its blossoming;
Autumn’s red-lipp’d fruitage too,
Blushing through the mist and dew,
Cloys with tasting: What do then?
Sit thee by the ingle, when
The sear faggot blazes bright,
Spirit of a winter’s night;
When the soundless earth is muffled,
And the caked snow is shuffled
From the ploughboy’s heavy shoon;
When the Night doth meet the Noon
In a dark conspiracy
To banish Even from her sky.
Sit thee there, and send abroad,
With a mind self-overaw’d,
Fancy, high-commission’d:–send her!
She has vassals to attend her:
She will bring, in spite of frost,
Beauties that the earth hath lost;
She will bring thee, all together,
All delights of summer weather;
All the buds and bells of May,
From dewy sward or thorny spray;
All the heaped Autumn’s wealth,
With a still, mysterious stealth:
She will mix these pleasures up
Like three fit wines in a cup,
And thou shalt quaff it:–thou shalt hear
Distant harvest-carols clear;
Rustle of the reaped corn;
Sweet birds antheming the morn:
And, in the same moment, hark!
‘Tis the early April lark,
Or the rooks, with busy caw,
Foraging for sticks and straw.
Thou shalt, at one glance, behold
The daisy and the marigold;
White-plum’d lillies, and the first
Hedge-grown primrose that hath burst;
Shaded hyacinth, alway
Sapphire queen of the mid-May;
And every leaf, and every flower
Pearled with the self-same shower.
Thou shalt see the field-mouse peep
Meagre from its celled sleep;
And the snake all winter-thin
Cast on sunny bank its skin;
Freckled nest-eggs thou shalt see
Hatching in the hawthorn-tree,
When the hen-bird’s wing doth rest
Quiet on her mossy nest;
Then the hurry and alarm
When the bee-hive casts its swarm;
Acorns ripe down-pattering,
While the autumn breezes sing.

Oh, sweet Fancy! let her loose;
Every thing is spoilt by use:
Where’s the cheek that doth not fade,
Too much gaz’d at? Where’s the maid
Whose lip mature is ever new?
Where’s the eye, however blue,
Doth not weary? Where’s the face
One would meet in every place?
Where’s the voice, however soft,
One would hear so very oft?
At a touch sweet Pleasure melteth
Like to bubbles when rain pelteth.
Let, then, winged Fancy find
Thee a mistress to thy mind:
Dulcet-ey’d as Ceres’ daughter,
Ere the God of Torment taught her
How to frown and how to chide;
With a waist and with a side
White as Hebe’s, when her zone
Slipt its golden clasp, and down
Fell her kirtle to her feet,
While she held the goblet sweet
And Jove grew languid.–Break the mesh
Of the Fancy’s silken leash;
Quickly break her prison-string
And such joys as these she’ll bring.–
Let the winged Fancy roam,
Pleasure never is at home. 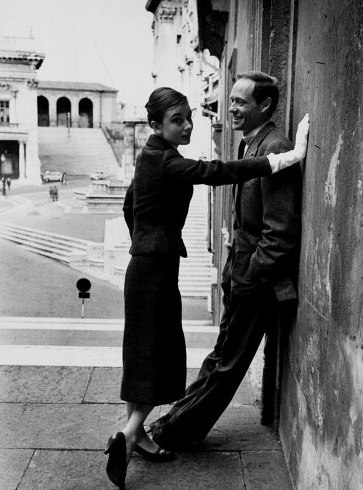 The actress Audrey Hepburn photographed with her husband Mel Ferrer in Rome (Italy). Photo by Sanford Roth, March 1958. Audrey was wearing a Givenchy suit (of wool, jacket and skirt, of his collection for the Autumn/Winter 1955/56) and Salvatore Ferragamo shoes. 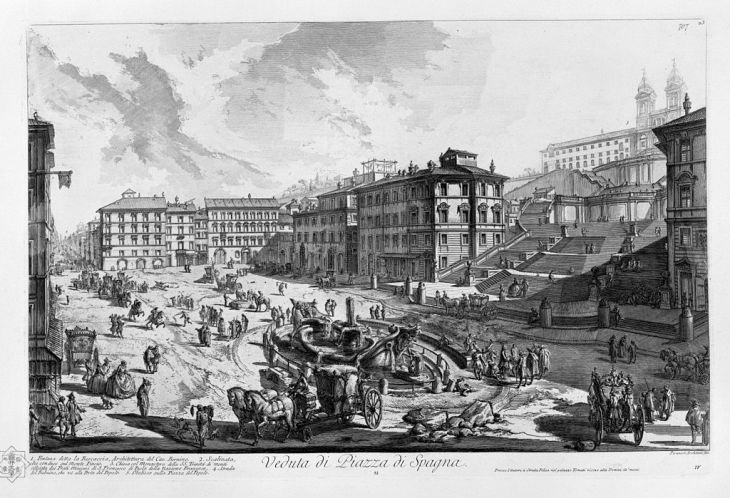 Piazza di Spagna in an 18th-century etching by Giovanni Battista Piranesi, seen from south. The street on the left is Via del Babuino, leading to Piazza del Popolo.

The monumental stairway of 135 steps (the slightly elevated drainage system is often mistaken for the first step) was built with French diplomat Étienne Gueffier’s bequeathed funds of 20,000 scudi, in 1723–1725, linking the Bourbon Spanish Embassy, and the Trinità dei Monti church that was under the patronage of the Bourbon kings of France, both located above — to the Holy See in Palazzo Monaldeschi located below. The stairway was designed by architects Francesco de Sanctis and Alessandro Specchi.

In the piazza, at the corner on the right as one begins to climb the steps, is the house where English poet John Keats lived and died in 1821; it is now a museum dedicated to his memory, full of memorabilia of the English Romantic generation.

At the top the stairway ramp up the Pincio which is the Pincian Hill. From the top of the steps the Villa Medici can be reached.

During Christmas time a 19th-century crib is displayed on the first landing of the staircase. During May, part of the steps are cover
ed by pots of azaleas. In modern times the Spanish Steps have included a small cut-flower market. The steps are not a place for eating lunch, being forbidden by Roman urban regulations, but they are usually crowded with people.

In the Piazza di Spagna at the base is the Early Baroque fountain called Fontana della Barcaccia (Fountain of the ugly Boat), built in 1627-29 and often credited to Pietro Bernini, father of a more famous son, Gian Lorenzo Bernini, who is recently said to have collaborated on the decoration. The elder Bernini had been the pope’s architect for the Acqua Vergine, since 1623. According to a legend, Pope Urban VIII had the fountain installed after he had been impressed by a boat brought here by a flood of the Tiber river.

The apartment that was the setting for The Roman Spring of Mrs. Stone (José Quintero, 1961) is halfway up on the right 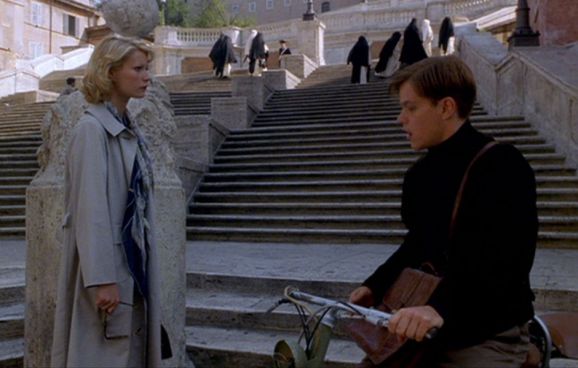 The Steps were featured prominently in the film version of The Talented Mr. Ripley(Anthony Minghella, 1999) starring Matt Damon in the title role

“I believe in constant pauses
Like a Roman holiday
And I often stop for air
As I climb the Spanish stairs”. 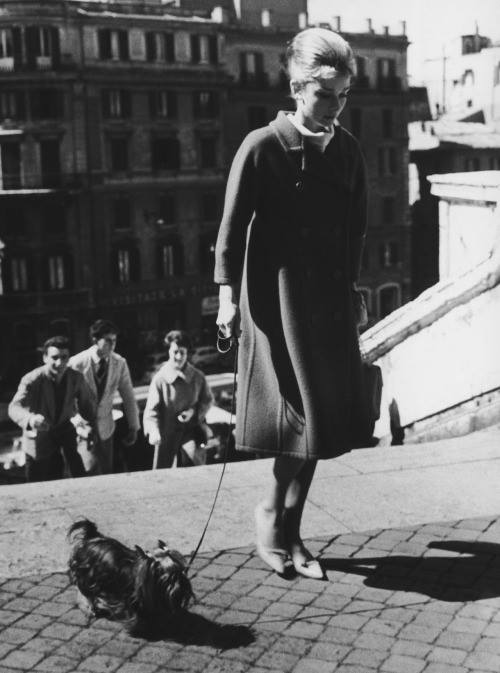