The name “Gregor Samsa” appears to derive partly from literary works Franz Kafka had read. The hero of The Story of Young Renate Fuchs, by German-Jewish novelist Jakob Wassermann (1873–1934), is a certain Gregor Samsa. The Viennese author Leopold von Sacher-Masoch, whose sexual imagination gave rise to the idea of masochism, is also an influence. Sacher-Masoch (note the letters Sa-Mas) wrote Venus in Furs (1870), a novel whose hero assumes the name Gregor at one point. A “Venus in furs” literally recurs in The Metamorphosis in the picture that Gregor Samsa has hung on his bedroom wall. The name Samsa is similar to “Kafka” in its play of vowels and consonants: “Five letters in each word. The S in the word Samsa has the same position as the K in the word Kafka. The A is in the second and fifth positions in both words.”

It might make sense since Gregor Samsa appears to be based upon Kafka himself. As when Kafka suffered from insomnia, he feared he was repulsive and a burden to his family, during which time his sister was his caretaker.

Another example of translations problem to English: Kafka’s use of the German noun Verkehr in the final sentence of Das Urteil (The Judgment). Literally, Verkehr means intercourse and, as in English, can have either a sexual or non-sexual meaning; in addition, it is used to mean transport or traffic. The sentence can be translated as: “At that moment an unending stream of traffic crossed over the bridge”. The double meaning of Verkehr is given added weight by Kafka’s confession to Max Brod that when he wrote that final line, he was thinking of “a violent ejaculation”.

As previously stated in the post Changed Into a Beetle (https://thegenealogyofstyle.wordpress.com/2014/09/06/changed-into-a-beetle/) Vladimir Nabokov, who was a lepidopterist as well as writer and literary critic, insisted that Gregor was not a cockroach, but a beetle with wings under his shell, and capable of flight. Nabokov left a sketch annotated, “just over three feet long”, on the opening page of his (heavily corrected) English teaching copy. In his accompanying lecture notes, Nabokov discusses the type of insect Gregor has been transformed into, concluding that Gregor “is not, technically, a dung beetle. He is merely a big beetle”.

English and Spanish translators have often sought to render the word Ungeziefer as “insect”, but this is not strictly accurate. In Middle High German, Ungeziefer literally means “unclean animal” and is sometimes used colloquially to mean “bug” – a very general term, unlike the scientific sounding “insect”. Kafka had no intention of labeling Gregor as any specific thing, but instead wanted to convey Gregor’s disgust at his transformation. The phrasing used by Joachim Neugroschel is: “Gregor Samsa found himself, in his bed, transformed into a monstrous vermin”, whereas David Wyllie says” “transformed in his bed into a horrible vermin”.

However, in Franz Kafka‘s letter to his publisher of 25 October 1915, in which he discusses his concern about the cover illustration for the first edition, he uses the term Insekt, saying: “The insect itself is not to be drawn. It is not even to be seen from a distance.”

The first edition cover, is not a definitive statement on the story either. Is it the afflicted Gregor Samsa we see or his unnerved father fleeing from the sight of the creature in his son’s room? As it was written in German, Kafka never definitively stated what Gregor had become. The term he used, in what has now become one of the more famous opening lines in literature, to describe Gregor’s transformation was “ungeheueres Ungeziefer,” which literally means “unclean animal not suitable for sacrifice.” This has been translated (and mistranslated) as “gigantic insect” in some cases, but in later years, more translators have settled on “monstrous vermin,” as this seems to suit Kafka’s vague intent much better. 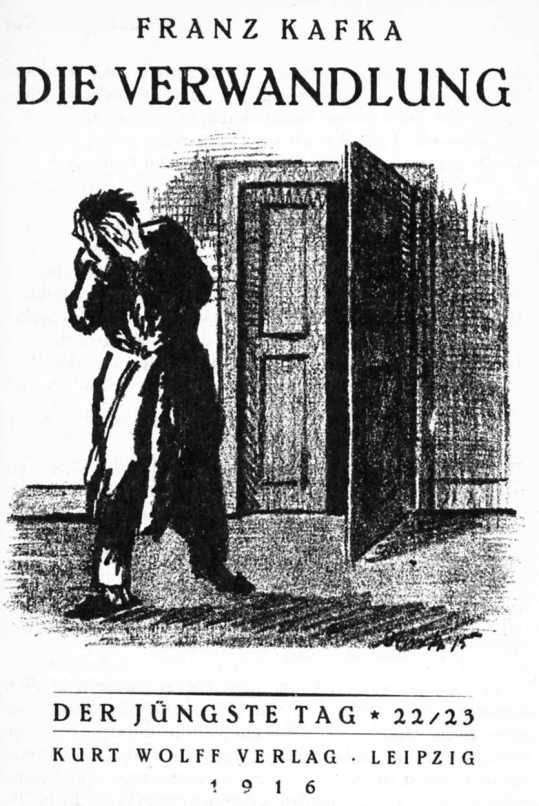