Odilon Redon‘s work represents an exploration of his internal feelings and psyche. He himself wanted to “place the visible at the service of the invisible”; thus, although his work seems filled with strange beings and grotesque dichotomies, his aim was to represent pictorially the ghosts of his own mind. A telling source of Redon’s inspiration and the forces behind his works can be found in his journal A Soi-même (To Myself). His process was explained best by himself when he said:

“I have often, as an exercise and as a sustenance, painted before an object down to the smallest accidents of its visual appearance; but the day left me sad and with a not satiated thirst. The next day I let the other source run, that of imagination, through the recollection of the forms and I was then reassured and appeased.”

The mystery and the evocation of Redon’s drawings are described by Joris-Karl Huysmans in the following passage:

“Those were the pictures bearing the signature: Odilon Redon. They held, between their gold-edged frames of unpolished pear wood, undreamed-of images: a Merovingian-type head, resting upon a cup; a bearded man, reminiscent both of a Buddhist priest and a public orator, touching an enormous cannon-ball with his finger; a spider with a human face lodged in the centre of its body. Then there were charcoal sketches which delved even deeper into the terrors of fever-ridden dreams. Here, on an enormous die, a melancholy eyelid winked; over there stretched dry and arid landscapes, calcined plains, heaving and quaking ground, where volcanos erupted into rebellious clouds, under foul and murky skies; sometimes the subjects seemed to have been taken from the nightmarish dreams of science, and hark back to prehistoric times; monstrous flora bloomed on the rocks; everywhere, in among the erratic blocks and glacial mud, were figures whose simian appearance—heavy jawbone, protruding brows, receding forehead, and flattened skull top—recalled the ancestral head, the head of the first Quaternary Period, the head of man when he was still fruitful and without speech, the contemporary of the mammoth, of the rhinoceros with septate nostrils, and of the giant bear. These drawings defied classification; unheeding, for the most part, of the limitations of painting, they ushered in a very special type of the fantastic, one born of sickness and delirium.”

Redon also describes his work as ambiguous and undefinable:

“My drawings inspire, and are not to be defined. They place us, as does music, in the ambiguous realm of the undetermined.”

It is a sketch of a black bull, caught in mid-leap, with what seems to be a bouquet of faces and butterflies flowering from its back. The idea of a toro mariposa might suggest a sexual ambiguity. The drawing, simple but with a great expressiveness, was created during Goya’s voluntary exile in Bordeaux. As the auction house Christie’s quotes: ” the composition is the perfect expression of Goya’s reputation as the first truly modern artist with a surrealism that prefigures Odilon Redon and a searching line that anticipates the young Picasso.” The auction house sold the drawing in 2006 and next year it was acquired by the Prado.

In his Bordeaux albums, Goya abandoned the medium of pen, brush, and ink he had used in earlier private drawings in favor of black crayon—a choice undoubtedly inspired by his work in lithography. This softer medium allowed for greater breadth of execution and compensated for a certain loss of manual dexterity. The drawings from Album G are inscribed with short, enigmatic texts, as in most of the earlier albums; in Album H he signed the sheets but wrote inscriptions on only six. The figural style here is energetic and cartoonish, rather than classical and correct. Flashes of satire and mockery — recalling the spirit of his famous prints, Los Caprichos — run through the sheets. These intimate, freely executed works draw us into the artist’s stream of consciousness as he reacts to novel sights in Bordeaux, revisits long-standing themes, and conjures enigmatic images out of his imagination to puzzle his friends. 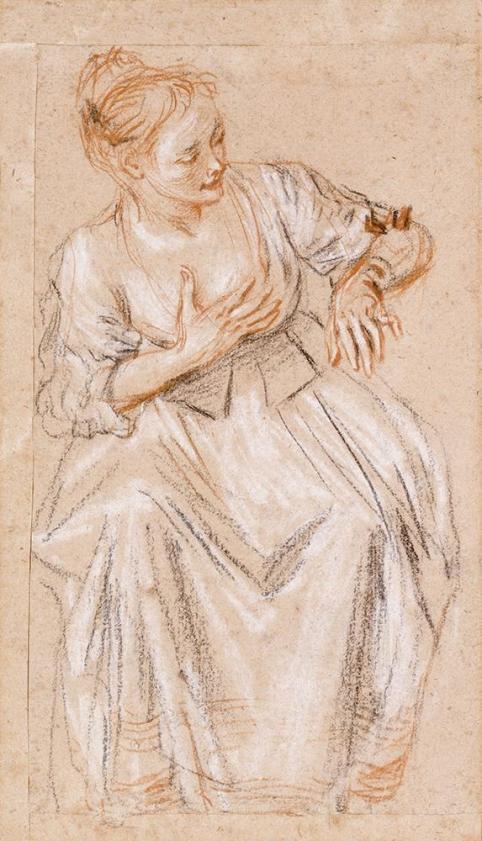 (“Watteau, carnival where many a distinguished soul
Flutters like a butterfly, lost in the brilliance
Of chandeliers shedding frivolity on the cool,
Clear decors enclosing the changes in the dance…”)

The stanza on Watteau invokes butterflies. Watteau, in this stanza, is associated with the carnival where “many a distinguished soul flutters like a butterfly, lost in brilliance.” Besides acrobats, jugglers, and side show performers, we often find the clown. And one of Watteau’s most famous series of paintings takes Commedia dell’arte as their subject. One of the most famous of these, is his painting of Pierrot. Baudelaire, no doubt, was aware of this work, and wrote about it in his famous essay The Painter of Modern Life.